Measuring the success of smart cities

When it comes to smart technology, as elsewhere, we tend to abhor the average. Medium is often seen as a synonym for mediocrity. Could this be about to change?

Over the past 60 years BSRIA has become rather good at assessing the performance of building systems, which increasingly encompasses ‘smart’ buildings. This is despite the fact that buildings come in an almost limitless variety of ages, structures and functions, with the capabilities of building systems being similarly diverse.

We know that a smart building will be one that uses technology to improve the efficiency, comfort, security and safety of a building in a cost-effective way, and most of these factors can, to some degree, be measured.

But what about smart cities? You can search online for the “smart” capabilities of almost any significant city and find plenty of interesting information and often a designated programme. But to make sense of this information, let alone to measure one city’s ‘smartness’ against another, you need to answer some fundamental questions:

None of these questions are trivial. Different factors may become more or less important over time. At a time of high energy prices and concern over climate change, use of smart solutions to improve energy efficiency will be key. If there are major concerns over cyber security or terrorist threats, then a smart city’s resilience against these will come to the fore. And in a financial crisis the ‘smart’ solutions will tend to be those which save most money.

In an area of shifting sands a few organisations have attempted to put stakes into the ground. The European Smart Cities initiative supported by several academic institutions, including the Technische Universität Wien, ranks European cities against six key criteria:

Each of these is in turn broken down into a number of factors. But how objective are the results?

Luxembourg, which comes top, just so happens to be the capital of the richest country in the world per capita. While the correlation between wealth and smart cities is strong, the causal relationship is less clear. How much of a rich city’s smart technology is contributing to the city’s wealth, and how much of it is ‘nice to have’ froth?

If we delve a bit deeper, we can start to see how different factors contribute to a smart city’s success. You might for example expect that effective smart governance would be easier in smallish cities where the leaders can more easily keep in touch with the real needs of citizens. And sure enough, smaller cities do appear more effective than larger ones in this regard, with cities in the range of 100,000-150,000 occupying the ‘golden spot’, and cities with over 300,000 generally ranking much lower.

Interestingly, larger cities also come out worst when measuring smart mobility. The larger cities will of course typically face more serious challenges when it comes to managing congestion. Perhaps more surprisingly, the smallest cities also do less well than the average, perhaps because they have fewer resources to call upon:

But surely there must be some areas where larger cities find it easier to be smart. One clue to this lies in another survey. The Global Power City Index (GPCI), published by the Mori Memorial Foundation is not about smart cities in the narrow sense rather it “evaluates and ranks the major cities of the world according to their 'magnetism' i.e. their comprehensive power which allows them to attract creative individuals and business enterprises from every continent and to mobilize their assets in securing economic, social and environmental development.”

The survey also, by its very nature, focusses mostly on the biggest cities. It measures these against a series of criteria. For one of these – strength in research and development - there really do seem to be economies of scale. 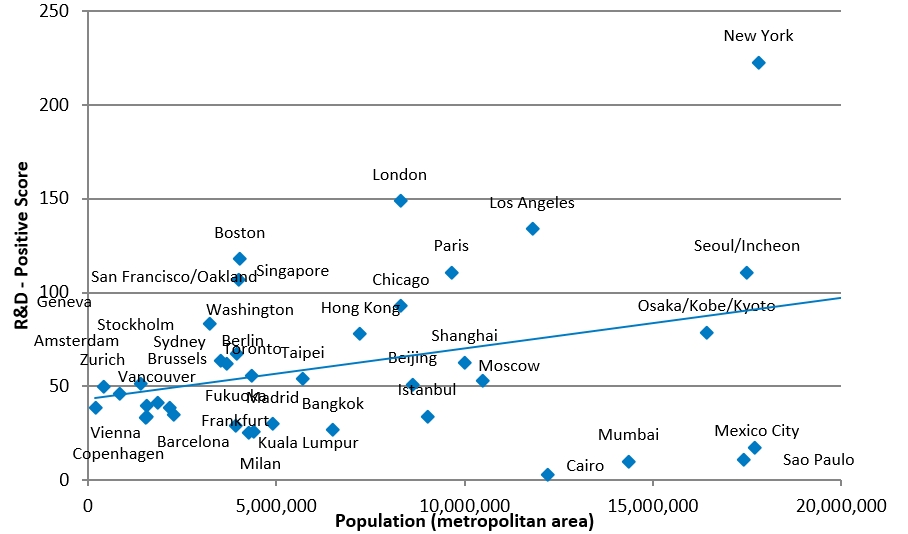 Here we can see larger cities holding the advantage, especially New York, but also London, Los Angeles and Seoul. This reflects the tendency for technical expertise to cluster in cities and regions where companies and employees feed off each other. Significantly, the only poorly performing larger cities are in emerging economies, and so could be expected to ‘mature’ over time.

Much of this confirms what we might have predicted, and clearly size is only one of a number of factors in the smart city, and not in any way decisive. Nonetheless, when we are looking at how best to develop smart cities where we want to live and work, it does have implications.

Humans are heavily influenced by scale. Research has confirmed that organisations function best in groups of 150 maximum. Could it be that about 100-150,000 is the ‘optimum’ size for planning a smart city? If so, there are important implications. The answer may lie not in the megacities that we are seeing in some parts of the world but in the smaller and mid-sized cities. And larger cities, like London and Paris may be wise to devolve much of their work to more local boroughs and arrondissements as they already do.

There is also an important lesson in this for the rapidly growing list of companies offering smart city services, which helps answer the question as to which cities offer the most exciting prospects, and what kinds of solutions they are most likely to be receptive to. The ‘smart city’ of the future may actually end up looking less like New York and more like the old York (population 200,000).

This article originally appeared in BSRIA’s Delta T magazine, as Smart Cities: Small to Medium is Beautiful? - We tend to abhor the average, could this be about to change? written by BSRIA’s Henry Lawson and published in January 2016.