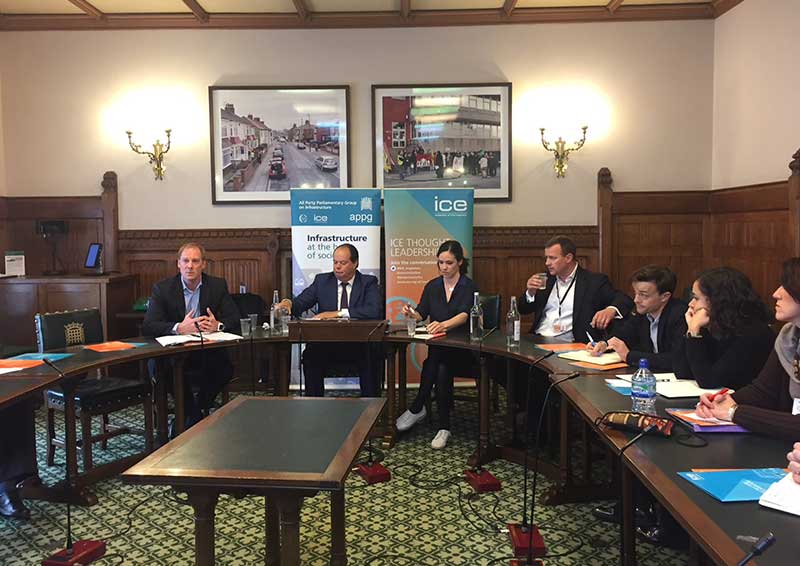 In May 2017, an ICE Thinks panel discussion with the All Party Parliamentary Groups on Infrastructure and Smart Cities discussed big issues around inclusivity, technology and public perception – and asked what does government need to do to make it all happen?

Held under the unattributable Chatham House Rule, the questions discussed were:

The inevitability and urgency for change underpins much of the discussion around smart cities.

Engineering and technology hugely impact not just how we manage our urban environments but also our sense of wellbeing from living, working and visiting those cities. Technological change is increasing the inequality between rich and poor – Airbnb and Uber are transforming the way that cities work.

While the pace of change within sectors such as services is notably fast, this is not the case within construction (although some systems around urban design are evolving far quicker than government itself. Innovate UK is a case in point.).

There is a growing pool of committed civil engineers and other infrastructure professionals fighting for the importance of urban spaces which are inclusive of marginalised groups. People with the optimism, skills and knowledge to make a real difference.

To drive truly inclusive design, traditional approaches need to be broken and not repeat what's already been done. A total shift in how smart cities are delivered is needed now.

[edit] Cities that adapt to people, not the other way around

Drawing on the example of Masdar City in Abu Dhabi as (arguably) a failed smart city, it is crucial that industry and policymakers stop expecting people to adapt to smart infrastructure, when it should be the other way around. When building smart cities, you have to go with (not against) the grain of human nature.

But what does this mean in practice? There is a risk that we are currently planning according to current consumer behaviour. But this will evolve over the next 10-20 years, to accommodate the arrival of driverless cars on our streets, or increasingly flexible working patterns perhaps.

With ever increasing demand for broadband what will the centre of our cities look like? Will retail spaces be hollowed out to become just shop front windows where you view items you want to purchase and have them delivered to your home the following day?

With the rise of technology what value will our grandchildren place on social interactions?

One possible response to this is that in 20 years, however much cities will have changed, fundamental human behaviour will not. That takes far longer. We need to recognise that there are different speeds to change. Some, like Uber, are rapid and disruptive but others – particularly the infrastructure sector – will take time and are cumulative.

It may be that while the centre of cities will always be a physical place for human interaction we will simply choose to live near different types of people. The challenge for policymakers and industry is how to integrate a smart, fast evolving city with its far edges, which aren't necessarily keeping up. At the heart of this challenge is the question of how to manage people's expectations of change and technology.

[edit] Public doesn't know what a smart city is

There is a widespread tendency to talk about smart cities as though they are already well established in the public's imagination. They are not and won't be until we can at least define what they are.

The challenge is the huge knowledge gap in what real inclusive design means. Developing a knowledge base leads to a framework which then translates into practice – the creation of health and safety standards and language being a case in point.

We don't yet know how to translate knowledge into action because there isn't a professional language for designing inclusive cities. What we use currently is confusing and divisive.

When developing the new language of smart cities we must ensure that inclusion is ingrained into the process – as sustainability was 20 years ago. ICE has called for government to do more to recognise the interdependencies between sectors, in particular the relationship between the energy, transport and digital sectors. This kind of thinking should also be applied to inclusion.

[edit] Role of government and technology

Successful smart technology that underpins the design of smart cities should be reliable, convenient, labour-saving, future proof and provide instant access. Government has the power to make or break smart cities. Too much of a 'bottom-up' approach can result in a lack of strategic coherence while taking a 'top down' approach, such as in Dubai or Singapore, can stifle innovation.

If technology is to flourish it must either connect with incumbent business models or disrupt them. Clarity on what we mean by disruptors, followed by clear boundary setting for smart technologies, is needed. The difficulty is the speed at which government changes conditions to encourage, rather than dictate, this disruption.

Without clear leadership from government, policymakers cannot ensure efficiency of services. A major government lever in enabling the shift is procurement – ensuring there is a focus on making cities smart in planning tenders.

Care is also needed. The example of Kodak having invented digital cameras and then seeing its business model disrupted by them, unable to harness the power of their own technological innovation, was cited.

When it comes to data it is the tech sector rather than the construction industry or government that truly understands its value. Government can be ineffective as an 'intelligent' infrastructure client. Will the way forward come from smaller companies and the data they collect?

Transport app Citymapper was cited as an example of one that collects data and feeds it back to City Hall. Data has a value and financial investors and the insurance market will drive the shift required.

Ultimately, the success or failure of smart cities depends on our ability to integrate the human, digital and physical factors, and the importance of understanding the value of these.

In an industry built on incentivisation there is a clear role for professional engineering institutions such as ICE to convene a new investor approach to the design of smart cities and provide the framework for a new generation of infrastructure sector professionals.

This article was originally published here on 24 May 2017 by ICE. It was written by Joanna Gonet, ICE Public Affairs Manager.

Retrieved from "https://www.designingbuildings.co.uk/wiki/Smart_cities_need_to_find_some_smarter_answers"
Create an article