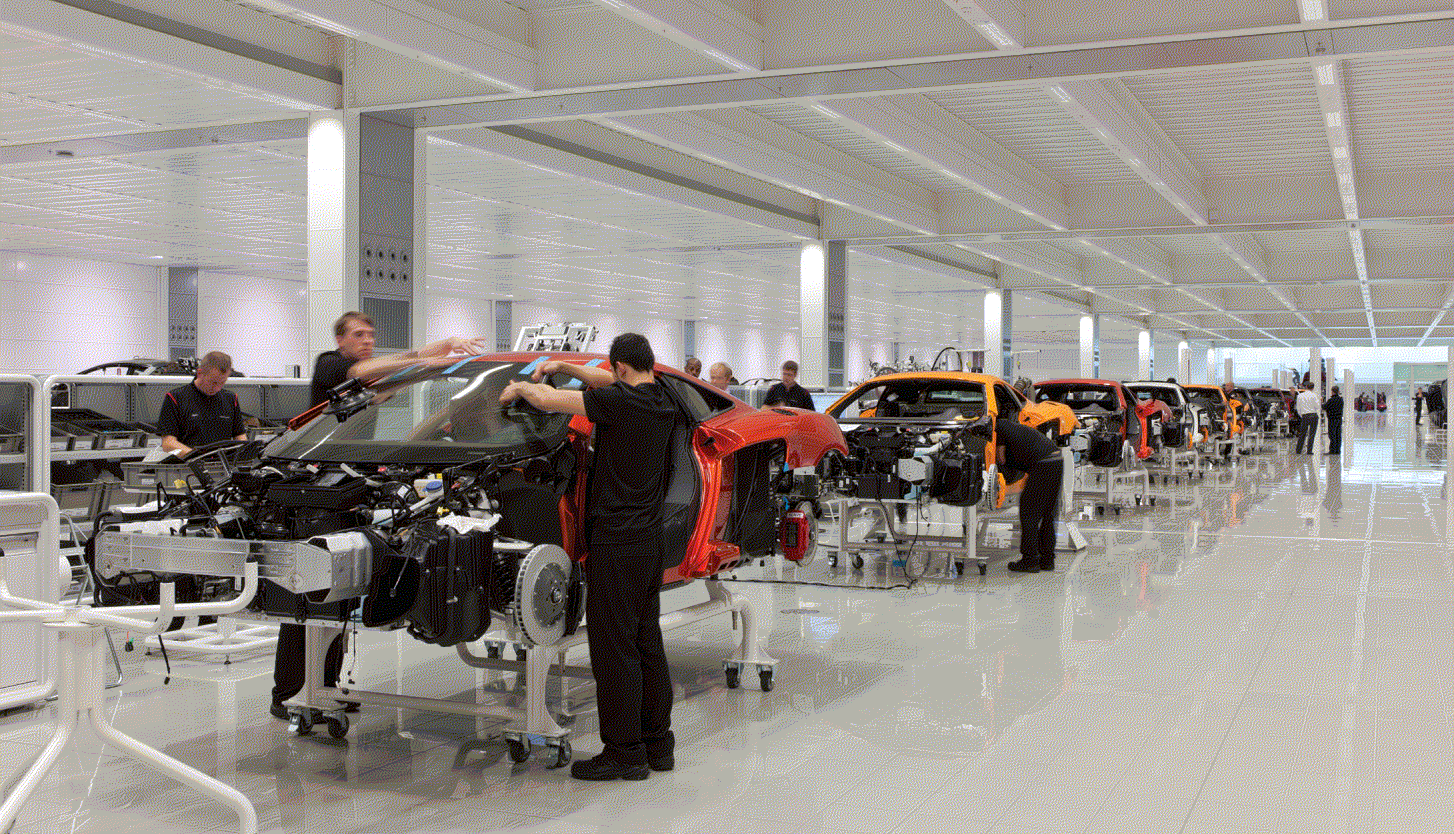 Opened by the Prime Minister on 17th November 2011, McLaren’s new Production Centre in Woking is the manufacturing facility for the McLaren MP4-12C super sports car. The design was developed to provide 34,500m2 internal area to meet the ethos set by Ron Dennis, Executive Chairman of McLaren Group and McLaren Automotive: “Our buildings make a powerful statement about what the McLaren Group stands for: performance, technology, inspired design, innovation and meticulous attention to detail, all while operating in sympathy with the environment.”

The project was managed and administered by McLaren. The architects were Foster + Partners, who also designed the neighbouring McLaren Technology Centre. Buro Happold were appointed as structural engineers and were responsible for producing the structural Employers Requirements for the new project. The detailed design was developed through to construction information by Sir Robert McAlpine under a design and build contract to meet the demanding 54 week construction programme. Foster + Partners and Buro Happold then assisted McLaren during the fit-out when £15m of production equipment, including the paint shop, were installed and commissioned.

The building designers (architect, structural and building services engineers) worked in collaboration with McLaren and the automotive designers to achieve a fully integrated building that works with the production flow developed for the cars. This ensures that no compromises are made to the assembly process, and that the finish quality of the building complements the high level of design of the cars.

As the site was located in the greenbelt, the design had to comply with very tight planning restrictions on building height set in relation to the small grassy knoll located in the centre of the site. This necessitated sinking the building within the landscape, requiring the excavation of 180,000m3 of soil (equivalent to nearly 70 Olympic sized pools). The excavated material was retained and used to re-landscape the rest of the site. Given the high water table, presence of contamination from an old landfill site and the need for a class 4 dry basement environment, this was not without its challenges.

The resulting building is two story, with the buried portion being concrete, and the above ground elements being steel. The building was sensitively designed to integrate into the landscape to minimise its visual impact.

The super-structure is designed using double primary beams and columns so that all the services, including air supply, power, data, lighting and sprinklers, are concealed within the structural steel frame. The air is supplied at low level within the double columns to provide ventilation via displacement, giving improved environmental conditions for less energy. Beneath the air supply is a slot for panels installed during the fit-out to provide data, single and three phase power and compressed air required for the assembly process.

Key aspects to the design are its simplicity and the high level of repetition. A cross grid 18m, 21m, 21m, 21m and 18m was selected to optimise the working aisle widths beneath. These are then repeated on an 18m grid for 12 bays along the length of the building. Primary, secondary and tertiary beams were then optimised for these spans and repeated throughout the building. 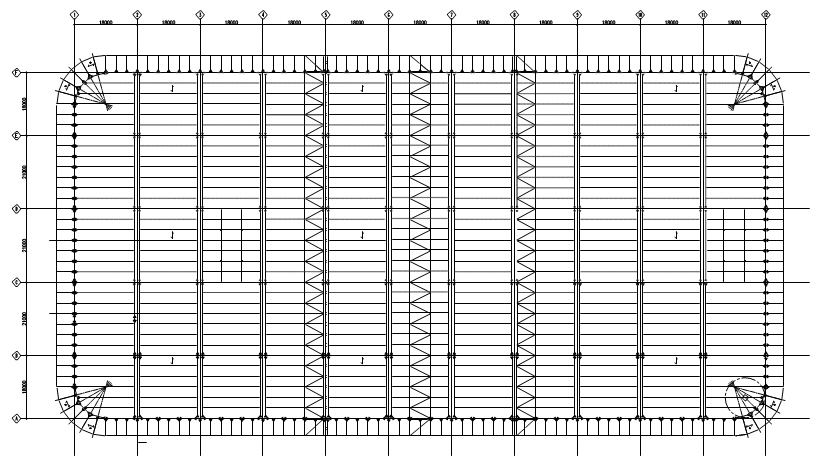 Given the generous site dimensions, the construction of the 180 x 70m basement that extended under about 3/4 of the building footprint was done as an open excavation. However, before any construction could begin, the water table had to be lowered that required a network of boreholes to be installed around the perimeter of the site. After extensive negotiations with the local water authorities and planners consent was given to discharge into the adjacent watercourse, and construction could begin.

With the basement being some 4-6m below ground level, and the watertable being at almost ground level, the natural buoyancy of the basement exceeded the weight of the building. This enabled the foundations to comprise solely of 1,300 tension piles that were installed on a 3.3m grid, with each pile being designed for a 500kN uplift load. The 600mm thick basement slab was then designed to resist these uplift pressures and transfer the columns loads in both their temporary (de-watered) and final (buoyant) states.

Waterproofing was done using traditional tanking with a further level of protection being provided using a “delta membrane” beneath the final screed floor. Any water ingress was then discharged into gulleys formed in the slab that drained to sumps at each end of the building. All other drainage was located in trenches formed in the basement slab to prevent any penetrations through the waterproofing layers.

On completion of the main basement, a cut and cover tunnel was constructed to link the Production Centre with the Technology Centre. Where this penetrated the original diaphragm wall of the MTC a complex sequence of works was used to maintain the water integrity of the MTC.

Once the basements were fully watertight, the pumping was gradually turned off and monitoring was carried as the watertable rose. The basement remained dry.

The detailing of the key interfaces was carefully considered to meet the architectural, structural and building services aspiration and a prototype of a typical bay was fabricated and installed. On approval of the prototype was received, fabrication could commence and the steel was erected on site as the concrete box progressed.

Although the bulk of the internal steel elements are standardised, the perimeter of the building and the entrance drums are expressed to match the visual appearance of the Technology Centre. Elegantly detailed spiral stairs and viewing galleries were also added to enhance the visitors experience when entering from the Technology Centre.

In the majority of locations the steelwork is left exposed. These areas received a high quality painted finish that matched the paint quality of any architectural finishes to give a very clean and consistent aesthetic to the space. Ceilings are used to conceal the services along the main distribution spines that run the length of the building that incorporate acoustic absorbency to control the reverberation of the space. Detailing avoids ledges and recesses to help maintain a pristine environment in keeping with the cars and ethos of the company.

The building was designed in parallel with the development of the process equipment, and recesses and voids were left for these items that included double height paint booths, testing and washing booths. The inherent flexibility of steel allowed for minor modifications to be made on site to account for the final detailed interface that gave the team the confidence to proceed with the production of the steel frame before the detailed fit-out requirements were known. 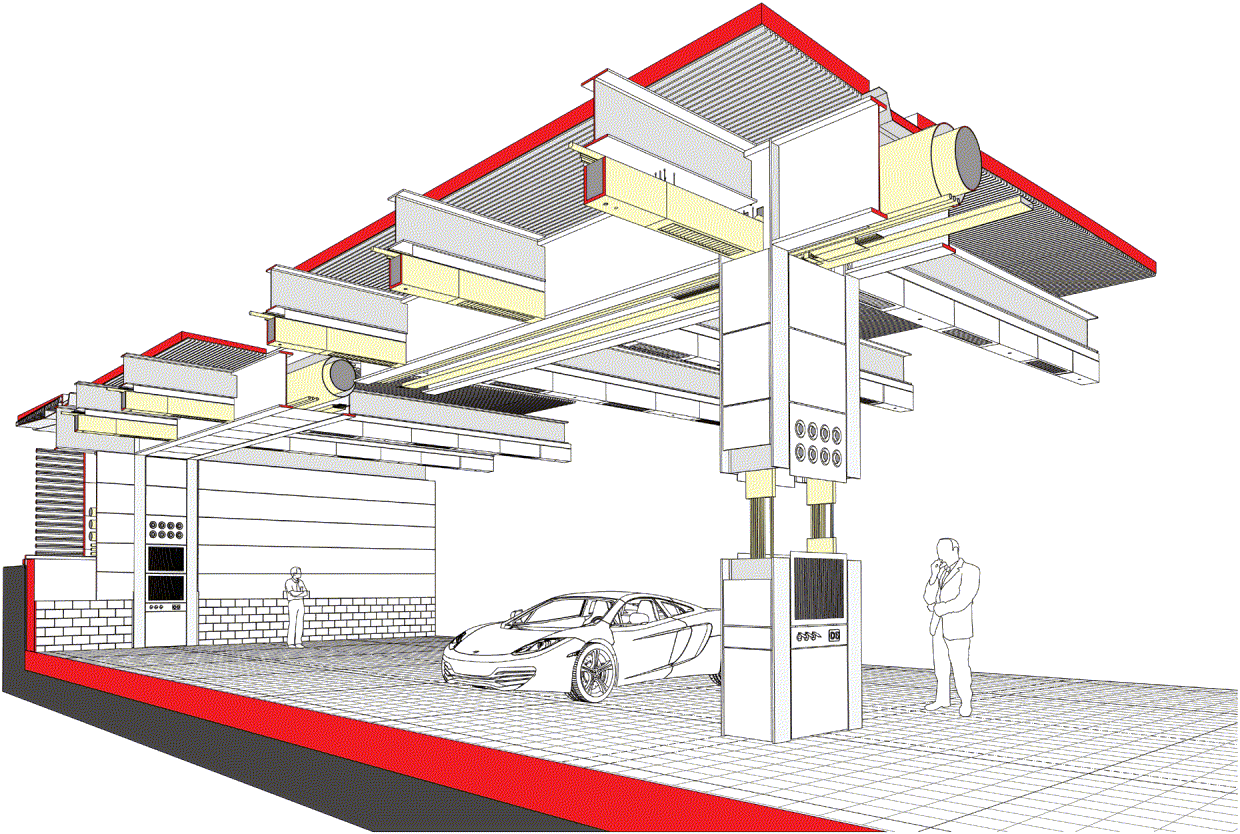 Retrieved from "https://www.designingbuildings.co.uk/wiki/McLaren_Production_Centre"
Create an article