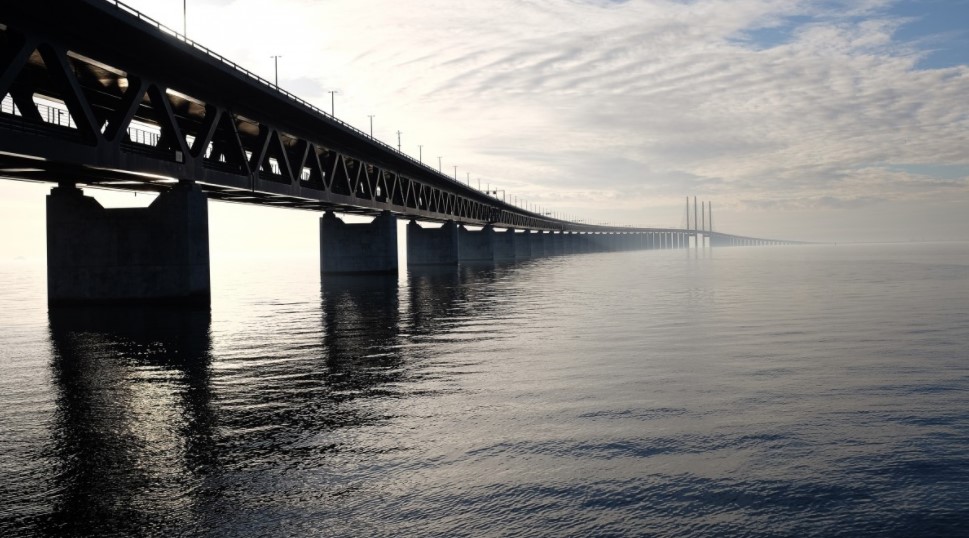 What does “improving people’s lives” mean to civil engineers on a rapidly warming planet?

I'm yet to meet a civil engineer who isn’t interested in improving lives for people through their work. “Making a difference”, “having a positive impact” and “improving lives” are phrases that ring true for so many of us and is the reason why we feel rightly proud of the railways, schools, hospitals, power stations, bridges and much more we build each and every day.

For me, and so many others, the desire to provide improvements to people’s lives was the motivation for becoming a civil engineer in the first place. For centuries, civil engineers have proudly brought clean drinking water, sanitation, safe housing, energy and safe transport access to billions of people around the world.

I had always understood that improvements to infrastructure would always result in better outcomes for communities, much like the linear relationship shown here:

It was only when I started to learn more about climate change that I realised that the world isn’t so black and white.

Climate change is undoing the progress we’ve made towards universal water, sanitation, transport and energy access in many parts of the world. To make matters worse, the infrastructure we’ve created is a significant cause of climate change, with over 70% of greenhouse gas (GHG) emissions directly or indirectly related to infrastructure.

The construction and operation of infrastructure such as power plants, buildings and transport systems are emitting huge amounts of gases, including carbon dioxide (CO2), which are trapped in the earth's atmosphere. Over time, this is causing life-threatening climate change.

At our current rate of GHG emissions, the World Health Organisation (WHO) estimates climate change will cause an extra 250,000 extra deaths per year from malnutrition, malaria, diarrhoea and heat stress alone.

Here’s how climate change is already affecting communities around the world today:

Indirectly, civil engineers have significantly contributed to GHG emissions and climate change for centuries, and for many of us without even knowing it. Personally, this is something I find upsetting to come to terms with, and it feels very much at odds with the sense of “wanting to make a positive impact” that so many of us have dedicated our lives to for years.

To make matters worse, climate change is also damaging the infrastructure we have already built.

Our existing infrastructure was not designed for the rising sea levels, droughts, extreme rainfall events and heatwaves that climate change will increasingly bring.

Just some examples of the infrastructure damage climate change will cause:

So, the relationship between infrastructure and better outcomes for people is not actually as linear as I once thought: 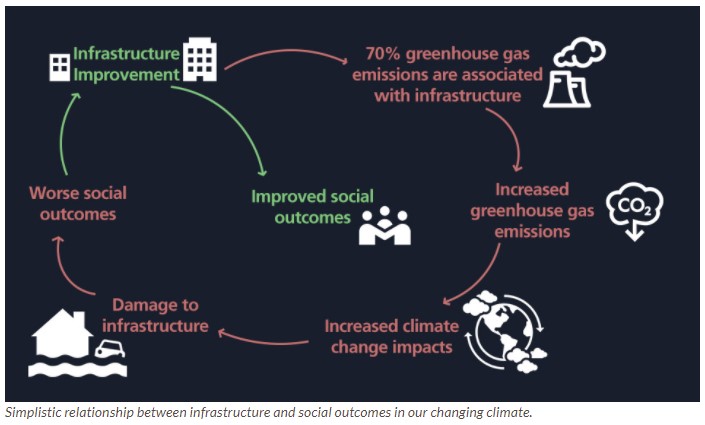 [edit] What does this mean for civil engineers?

All is not lost. We still have time to reduce GHG emissions and prevent the worst impacts of climate change. But we need to act fast.

There are two main ways that civil engineers can continue to improve social outcomes to people, even in the face of climate change: 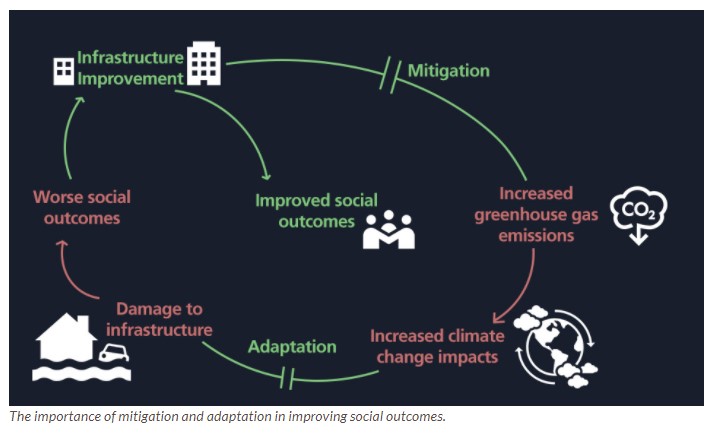 The first tool in our kit is mitigation, where we reduce the amount of GHG emissions.

This can be achieved by reducing the amount we build in the first place, developing renewable energy systems, using low-carbon construction materials such as timber or electrifying transport networks. We can also increase the amount of carbon capture in communities we design through introducing more trees and green spaces.

While many of us often focus on the changes we need to make in our personal lives, it’s the decisions we civil engineers make at work that have the greatest impact.

If concrete production were a country, it would be the third largest emitter in the world responsible for 8% of the world's CO2 emissions. Just 100m3 of C32/40 concrete results in 31.6 tonnes of GHGs, this is equivalent to six years of the average person’s carbon footprint in the UK .

I was on site this morning overseeing an 85m3 concrete pour, and in just six hours that activity was responsible for emitting 26.1 tonnes of CO2, equivalent to five years of my personal carbon emissions.

Even a small improvement to numbers of this significance makes a far bigger difference than personal lifestyle changes.

The second tool in our kit is adaptation, adjusting to current or expected climate change and its effects. For civil engineers this means designing our infrastructure to survive extreme weather conditions to ensure it still provides benefit to people, even in a warming world.

One example of this is the construction of flood defence schemes such as the Boston Barrier in Lincolnshire which is protecting over 14,300 properties from rising sea levels.

Another is by ensuring that the water supply, transport, energy and communication systems we design are able to cope with extreme weather events so that they do not fail suddenly or unexpectedly and cause harm to communities.

The climate emergency is the biggest issue of our time and if not tackled will make life worse for people all over the world. As civil engineers, we have the power to be able to reduce GHG emissions and protect communities from the harm of climate disasters.

Every project, across every sector can incorporate climate adaptation and mitigation into its design and construction and the responsibility to do so is with all of us. As our President Rachel Skinner said in her 2020 presidential address, we need to stop being invisible superheroes and start making ourselves visible superheroes!

For so long, civil engineers have been rightly proud of our positive contribution to society and the millions of lives we have improved. With urgent action today we can stay on the right side of history during the climate crisis and continue to make a positive impact to society.

This article originally appeared on the ICE Community Blog portion of the ICE website. It was written by Kaye Pollard, ICE President's Future Leader 2020/21 and published on 7 April 2021.

Retrieved from "https://www.designingbuildings.co.uk/wiki/Everything_we_thought_we_knew_about_civil_engineering_improving_the_world_is_wrong"
Create an article