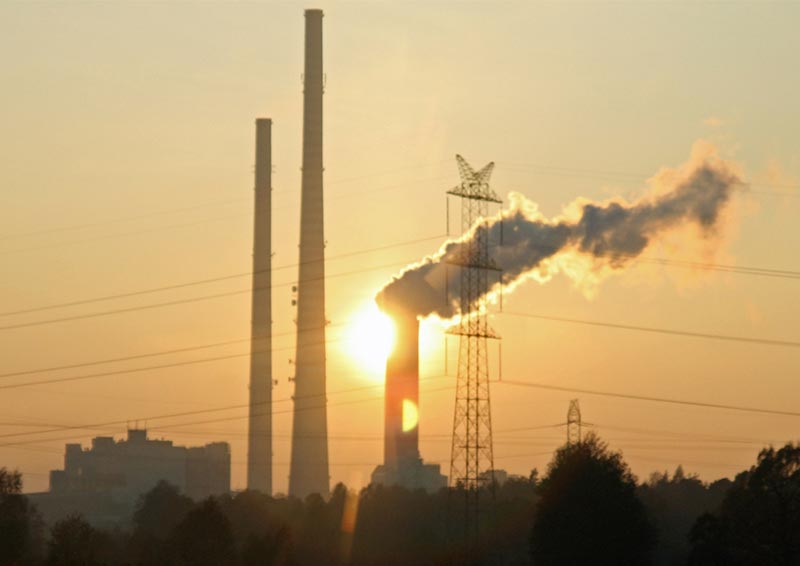 Carbon capture and storage (CCS) is an important technology for the future of UK industry as there are limited viable alternatives for industry to decarbonise. This article details plans to clean up Teesside including the financial model for industrial CCS and the funding role government needs to play.

Teesside has one of the highest concentrations of industry in the UK. Located close to North Sea carbon storage sites, a carbon capture and storage (CCS) network has the potential there to be as significant as offshore wind and new nuclear power and accelerate the UK's journey towards a competitive, low carbon economy.

The UK needs projects like Teesside Collective to generate new options to meet its carbon targets cost-effectively and industry needs the project to provide a solution for their carbon emissions while making these UK sites an attractive investment option.

CCS is no longer primarily a technical challenge, it is now a commercial challenge. Implementing a CCS network in Tees Valley – which Teesside Collective's work has shown is technically viable – would represent the UK's first commercial scale CCS project and establish Tees Valley as a pioneer of industrial development.

The project is now ready for government to work with the development team on phase one.

[edit] What is Teesside Collective?

Teesside Collective is a ready-made, cost-effective opportunity for the UK to start removing carbon dioxide emissions from its vital process and chemical industries.

Teesside Collective is a cluster of leading energy-intensive companies working together to build one of Europe's first CCS equipped industrial zones and has the potential to help to retain the UK's industrial base, attract new investment and jobs and meet the UK's climate change targets.

The group is made up of 5 large industrial companies in the region:

Teesside Collective is coordinated by Tees Valley Combined Authority and backed by the North East of England Process Industry Cluster. More industrial companies in the region are in the pipeline to join the project should UK government provide confidence around a long-term policy framework for CCS.

Many industrial plants produce CO2 through their process, which is separate to emissions from sources of energy. CO2 is produced from the chemical reactions needed to make the product and the quantity is therefore unaffected by energy efficiency measures.

Taking carbon dioxide from the flue gas before it is released into the atmosphere is the only option to decarbonise as there are no viable alternative chemical reactions for these production processes.

Industry is facing growing pressure to reduce carbon emissions. CCS is the only technology available to significantly reduce industrial carbon emissions, with no change needed to the production plant.

CCS is technologically proven at a commercial scale on industrial plants and there are 22 CCS plants operating across the world, including industrial sites in the US, Canada and United Arab Emirates.

[edit] Why Teesside for CCS?

Home to nearly 60% of the UK's energy-intensive industry, Teesside in Tees Valley is the ideal location to develop the first CCS network in the UK. Being the most integrated industrial cluster in the UK creates economies of scale that will minimise the cost of CCS.

In two instances in Tees Valley chemical plants produce pure CO2 as a by-product, some of this is already captured and transported for use in industries such as food and drink. The area is located on the coastline, with close proximity to storage sites in the North Sea.

Supportive infrastructure and skills are already in place in Teesside and government-funded work has proved Teesside Collective is technically viable and cost effective. Last but not least, local industry is already on board.

All industrial clusters across Europe face the same challenges and all are assessing the possibilities of CCS within the context of other decarbonisation opportunities.

[edit] What has Teesside Collective done so far?

To date, Teesside Collective has developed:

The Teesside Collective can act as the template for similar networks in other UK regions. There are also good expansion options within the region as it is an ideal location for power plants and hydrogen production technologies.

For example, Tees Valley already produces half of the UK's hydrogen which can be used for heating and transport fuel, planning permission is in process for an 850 MW gas-fired power plant in Teesside, and carbon can be captured from industry and sold to companies to use in commercial products.

[edit] The challenge: commercialising CCS in the UK

CCS is technologically proven at a commercial scale on industrial plants around the world. Its main challenge is financing.

Government needs decarbonisation from the UK's industrial base. In order for CCS to progress to a commercial scale it needs financial support from government.

There is an established precedent for government to support the technological progression and cost reduction of low carbon technologies through deployment, as the example of the UK offshore wind industry shows.

There are many hurdles that would prevent industries in the region from financing industrial CCS entirely on their own at this stage. Commodity industries are lean companies with low margins. There is no financial driver for private investment in CCS and more significantly there is an economic risk of increasing their UK cost base.

Transport and storage operation and liabilities are also outside the industrial remit and government's support is needed to ensure access to a suitable store secured in the North Sea.

The Energy Technologies Institute (ETI), a public-private partnership between government and major industry, completed an assessment of UK offshore CO2 storage and concluded that there was enough CO2 storage for over 50 years even from the limited stores that have been appraised.

Creating additional pressure is the timing of CCS. The UK needs to start deployment now to realise the full benefits of industrial CCS. The Committee on Climate Change (CCC) believes Industrial CCS will be needed from the mid-2020s onward if the UK is to stay on track for its 2050 emission reduction goals, a message which was reiterated in its June 2017 report to Parliament on meeting carbon budgets.

For this to be achieved, the CCC recommended that contracts be awarded by 2020. Further to this domestic pressure there are international considerations, including the possibility that the UK will lose inward investment to other EU countries.

Norway is pushing ahead with CCS front end engineering and design (FEED) studies on three industrial plants and its government is taking the CO2 leakage liabilities. Rotterdam and Antwerp are also moving forward with CCS projects.

Teesside Collective worked with Pöyry Management Consulting in 2016 to develop a finance model for industrial CCS, intended to kick-start investment in shared infrastructure.

Pöyry has deep commercial experience in CCS as well as regulation and policy making and as part of the UK CCS cost reduction task force has promoted the aim of reducing the cost of the technology and help the UK meet its climate targets.

The finance model is not a direct follow-on from Lord Oxburgh's benchmark report on CCS. However, it does assume a separate State-backed transport and storage company which takes CO2 liability.

This work found that the total cost of industrial CCS in Teesside is £58/tCO2 in total, including access to a transportation and storage network.

[edit] How can the Teesside project kick-start industrial CCS in the UK?

Teesside proposes to start CCS in the UK cost-effectively with the first phase capturing and storing 11 million tCO2 over 15 years. Once the network is proven, this would expand to capture and store 10m tCO2 per year as power stations and more industrial companies join the network.

The first phase would cost £110m to construct and £29m per year to operate, including a transport and storage fee.

The pilot could repay up to £31m per year to government in carbon saving income.

The pilot could be capturing and storing CO2 in six years.

[edit] What the Teesside project needs from government

Implementing industrial CCS within the next couple of years brings enormous benefits to UK infrastructure. All the modelled scenarios to achieve the UK's legally binding carbon targets require this technology. CCS has the unique ability to reduce carbon emissions by 90% at selected plants.

In addition to allowing the UK to meet its carbon targets at lowest cost, industrial CCS would be a strategic asset for UK – stimulating inward investment in low carbon products, electricity, fuels and heat. Being able to offer clean industrial zones to manufacturers and investors, and low carbon products to their consumers, the UK would be seen as a leader in driving clean growth. 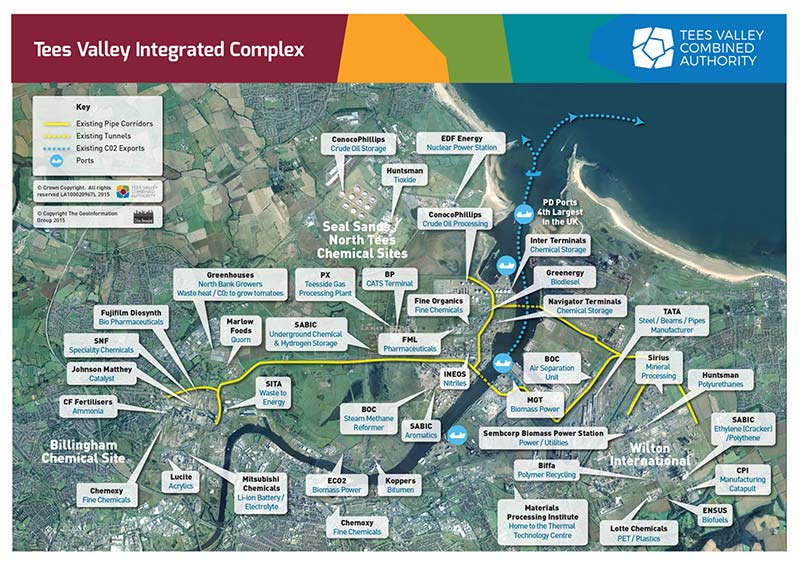 This article was originally published here on 18th Oct 2017 by ICE. It was written by Sarah Tennison, Tees Valley Combined Authority.

Retrieved from "https://www.designingbuildings.co.uk/wiki/Teeside_Collective_-_carbon_capture_and_storage"
Create an article