Using the earth as a method of thermally pre-conditioning the supply of air is a simple, cost effective way of employing huge thermal masses.

The stability of the ground temperature provides a renewable energy source that has been exploited for many years. This is demonstrated in many extreme climates by the use of ground-sheltered buildings, and in China, cave dwellings, which take advantage of a lack of thermal variation.

Water-based ground source systems are relatively common. They harness the stability of the ground temperature by passing a fluid through pipes that are in contact with the ground, or use ground water from deep sources.

Air-based systems are generally relatively low-tech, require shallow interventions in the ground and are suitable for most sites. They can often be implemented relatively cheaply with little mechanical equipment required. However, they tend to be less well-known than water-based systems, and their behaviour is not as well understood, in particular the effect of the system itself on the temperatures of buried air paths.

Early uses of this technology include The Royal Victoria Hospital in Belfast, which represented a landmark in the ventilation of hospital buildings. Air was supplied from a series of subterranean plant rooms, where it was filtered and/or cooled using wet sprays (in the days before Legionnaires' Disease was recognised as an issue), and heated before passing through buried brick corridors on the way to the wards. While the ground connection would have been wasteful in terms of heat energy, it would have provided some useful additional cooling in summer. For more information see - http://www.hevac-heritage.org/landmark_buildings/institutional/institutional.htm

As with all ground coupling, the basic principle is that the ground temperature is much more stable than the ambient conditions. Passing cold or warm air over a surface at a certain temperature will bring the air temperature closer to the ground temperature. Very little additional equipment or ground intervention is needed, particularly if the building is to be mechanically ventilated anyway.

The heat transfer achieved depends on the surface area available, the velocity (which to a large extent determines the heat transfer coefficient), the time spent in contact with the ground and the external temperature. These are often competing with each other, but the critical issue in any system is to ensure that the airflow in the ground contact zone is turbulent. For a typical floor plenum 300mm deep, this occurs at a velocity of as little as 0.2 m/s, reducing proportionately in larger ducts and increasing in smaller pipes. Once in the turbulent zone, the heat transfer coefficient will continue to increase as the air moves faster. However, it can still obey the law of diminishing returns, with high velocities increasing pressure losses, resulting in noisier fans and more electrical energy usage.

Analysis of the airside heat transfer can be performed relatively simply, but assessment of how the temperature of the ground varies with depth and time is more difficult, and requires detailed thermal modelling in four dimensions. As a general rule, the deeper the ducts the better, up to a depth of around 2-3m.

The heat and coolth recovered from the ground can not only reduce heating use in the building, but can effectively enable thermally-lightweight buildings to have summertime performance similar to those with large amounts of thermal mass. This can provide a high degree of resilience against changes in use, such as increased IT loads, occupancies, and longer hours of use. Most critically for the future, it is able to deal with the effects of climate change.

To illustrate the energy available, on a hot summer’s day the external temperature could easily be 30°C in the south of the UK, with a ground temperature of approximately 15°C. Heat transfer coefficients of 8 W/m²K are easily achievable, giving a cooling potential of 120 W/m². This can usefully serve buildings of two to three storeys. 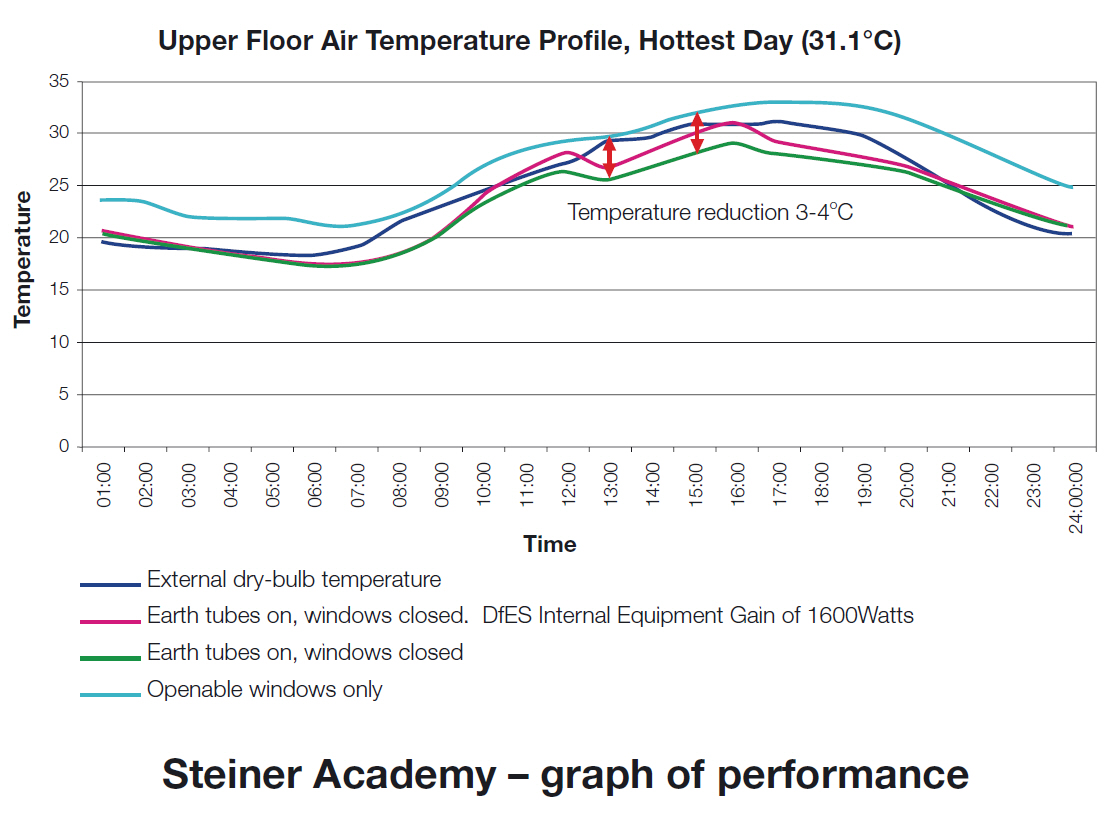 There are many possible configurations of air based systems, but the most common are earth tubes, and labyrinths and undercrofts.

Earth tubes are pipes buried in the ground. This is a cheap technology that can be easily utilised beneath the footprint of a building or in its surroundings. Burial depths of 2m are preferred, but 1m of cover can provide a good degree of stability.

Concrete and clay pipes are preferred, as they have a thermal conductivity similar to the materials in which they are buried and, in the case of clay, a low embodied energy. These ducts can be used as the inlet to a system or even on the supply to a room. However, care must be taken not to heat air in winter before passing it through the buried ducts, as heat will be lost into the ground.

A more powerful technique that can harness the entire footprint of a building is the use of labyrinths and undercrofts. These can be located under the building, or even extend beyond it, and can be deep enough to allow access for maintenance. The most well-known labyrinth scheme is probably the one at the Earth Centre in Doncaster, where the walls even have an irregular shape to increase turbulence and the surface area available for heat transfer.

Concerns are sometimes raised about the cleaning and maintenance of undercrofts and earth tubes.

Earth tubes can be dealt with in a similar way to drains, with access necessary at both ends, and preferably a pit at one end. CCTV can be used to check for defects, and spray methods can be used to clean the ducts. To ensure that condensation is managed efficiently, the ducts need to be laid with a slight fall.

Labyrinths are best dealt with by making them tall enough to be accessible. If this is not possible, regular access points into shallower voids should be provided.

It is crucial to ensure that dirt and vermin ingress is avoided by sealing any inadvertent entries to ducts.

If a building is mechanically ventilated, the additional cost of an undercroft or earth tubes can be relatively minor. They do not generally involve significant technology.

One issue with undercroft schemes is that while they recover heat during the winter, and coolth in the summer, there is a period in between when the air is likely to be cooled down by passing across the ground and will then need to be reheated before entering the building. This can be addressed by allowing the intake air to be taken either from the ground source or directly from outside, enabling the optimum balance of conditions, and reducing energy use further.

The thermal storage effect of large underground ducts can be increased by placing gabions within them, which provide an increased surface area and create a more turbulent flow.

Retrieved from "https://www.designingbuildings.co.uk/wiki/Ground_preconditioning_of_supply_air"
Create an article