A study of Chester carried out in the 1960s led to a pioneering programme of conservation in the city and it had a profound impact on the emerging profession of building conservation.

Chester: A Study in Conservation, published by HMSO in 1968, was an outcome of unusually effective and far-seeing government action, of which we may still nationally be proud. Very little so productive in practice as the four UK Historic Town Studies has been achieved anywhere else – particularly when taken into account with the ensuing active and dynamic city conservation programme movement which they initiated.

For Chester, this study included an influential section, prepared in advance and in direct discussion with a number of senior county planning officers, making practical recommendations to the government to consider in revising the Planning Acts. This makes absorbing reading today. The listing process had been energetically started, but it was still complicated, and needed simplifying and strengthening.

Above all, it was limited to individual buildings and their architectural merit, without regard for the wider local planning issues and their ‘group value’ in historic neighbourhoods. These areas had suffered dreadfully, mainly from bombing, but also from post-war neglect. Photographs of Chester taken at that time raise gasps of horror when publicly shown and seen afresh today.

For this neglect and lack of appreciation, responsibility lay entirely with the times. Urban property needs loving and looking after, impossible without resources, materials and labour, skilled and otherwise. For the state of our historic areas no one was to blame; but the issue increasingly became one of public conscience. A major opportunity was open, but no one felt sure how to take it, or how to secure effective action. Or, indeed, whether the scale of such an obvious need could really and in practice be faced, tackled and met. 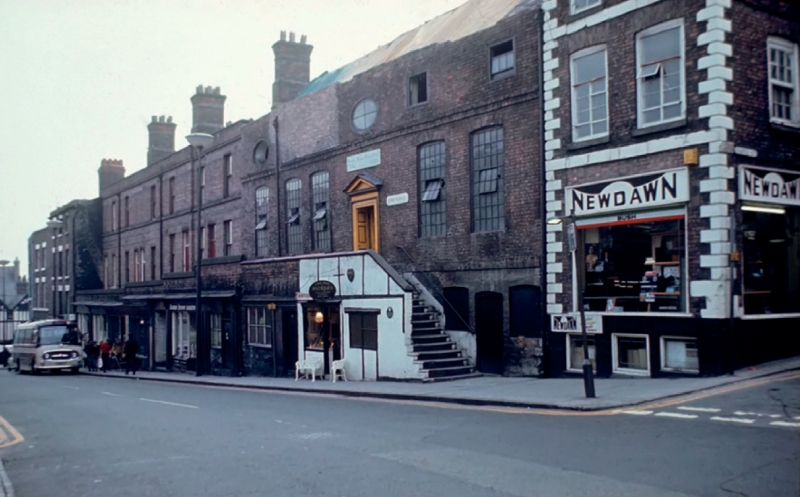 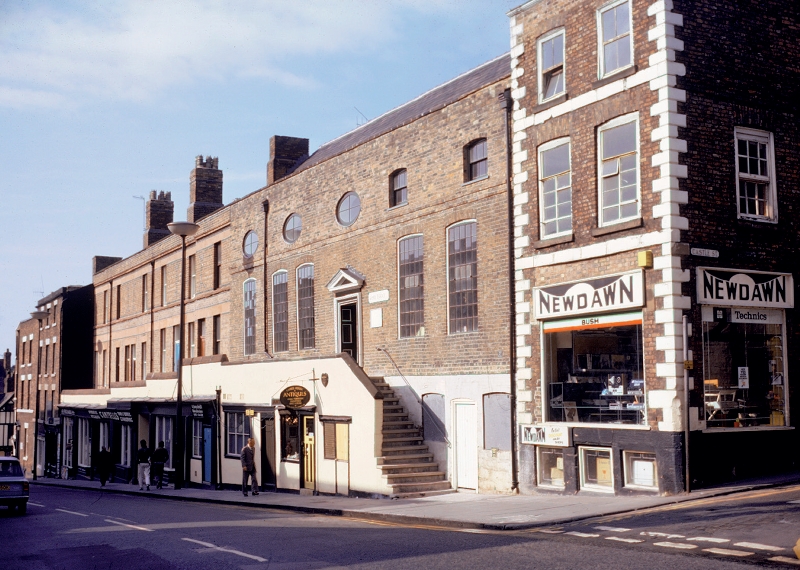 It was in these circumstances that the four famous Historic Town Reports (on Bath, Chester, Chichester and York) were commissioned, with clearly expressed terms of reference to examine, recommend and inspire positive conservation and indeed (a magic new word) ‘enhancement’. For it was seen that continuing urban change is an irresistible force which one can not aim to stop, yet can positively guide.

The four historic towns were given, in effect, an open invitation to assess the problem, reporting and recommending on remedies, and thus to set a national example.

A multi-disciplinary team made concentrated study visits to Chester. Staying locally, each time for several days, they brought fresh eyes to the city’s detailed problems and opportunities, discussing them with local people, to arrive at recommendations for a concerted attempt at reconciling them. The available urban maps were found to be out of date, and were redrawn in more relevant and manageable format. Site notes were taken on portable pocket recorders, typed and discussed. For individual buildings, an inspection record form was designed. This was used in inspecting over 450 buildings in detail, noting not only their special merits (both external and internal), but also their structural condition and, more significantly, the issues of ownership and use, all with a positive eye to remedy.

Although it felt rash at the time, the team’s surveyors were encouraged to venture in each instance a very approximate guess of costs and hence of practicality – and also any ideas about the most likely source of financial help. This would also provide a more useful indication to be arrived at about the whole size and scope of the problem nationally, assessing and demonstrating a real idea of true costs, and hence of any system of grant aid which might be set up to re-encourage local and private investment on the ground.

Data gathered on site were meanwhile discussed in detail. This included those first ‘impact’ observations which are always of the greatest significance and value, since only once do initial impressions find themselves fresh, recorded and accessible. Some original ideas included taking measured noise surveys in major streets, this being in practice such a tangible aspect of city experience.

Analysis revealed the contrast between traffic noise when echoed and reinforced between opposing buildings or when released at gaps, and the way in which sound can find itself creating quieter shadows behind any obstacle. Progressive movement-studies through urban areas investigated their subjective impact, as a dynamic experience of life on a street. Special townscape features and key assets were recognised and any contrasting debits noted, the whole being given an appreciative and comparative rating, as well as the by-now more traditional architectural and historical data.

As in the other cities under observation, moving and static traffic and (just as important) pedestrian circulation were meanwhile analysed, inspired by the then-recent Traffic in Towns exercise, so influential at this period. Vehicle standing and parking were assessed, it being found that any attempt to provide the total desired facilities would remove the entire fabric and facilities which their drivers had travelled to enjoy. A particular urban-planning bane was recognised in the dubious priority given to traffic sight-lines at corners, all based on assumptions of un-stopping vehicles, but in effect also eroding some of the best and finest buildings. 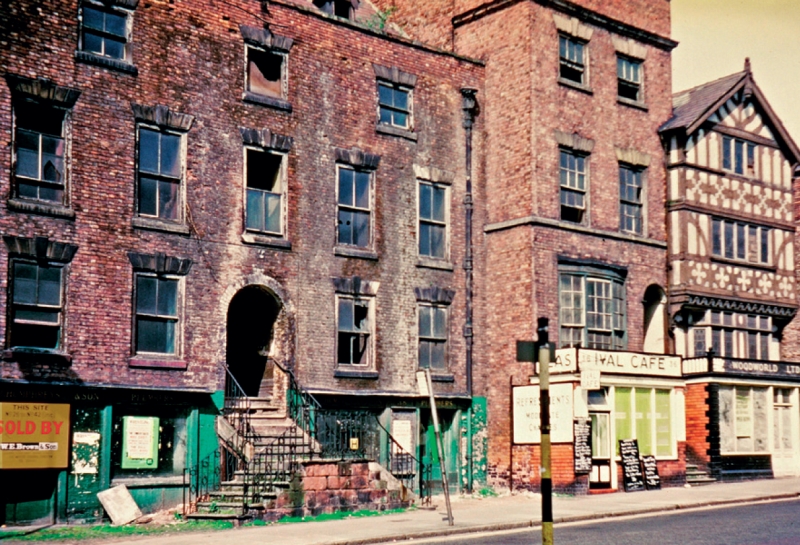 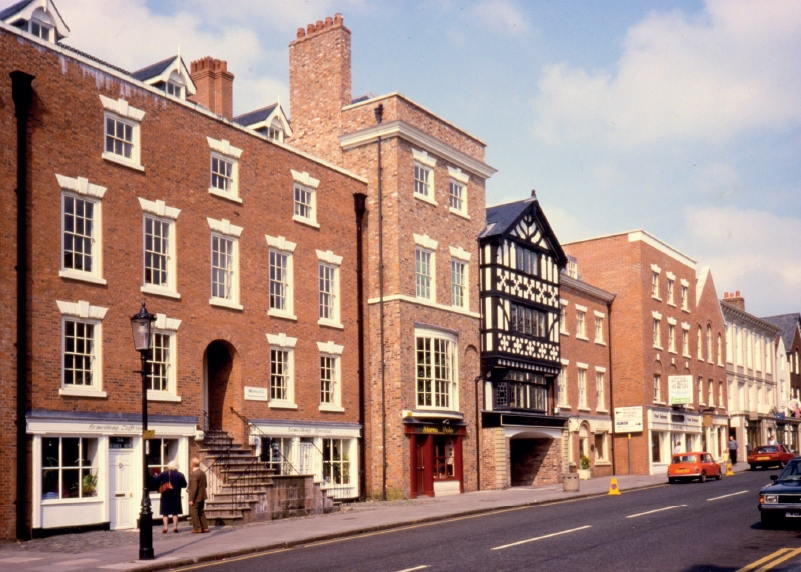 Lower Bridge Street after conservation (right, Image: Donald Insall Associates.) and in 1968 (left), as illustrated in Preservation and Progress: the story of Chester since 1960 by Stephen Langtree (editor), Peter de Figueiredo and Cyril Morris, published by Chester Civic Trust.

A major principle of the survey was always to consider the whole in relation to the part. With this in mind, the trading and commercial success of this and neighbouring settlements were set into perspective, both as they existed and might be expected to develop. Traffic movement similarly was studied in its relation to current and changing routes, first nationally, then regionally and then locally within the city. Throughout the exercise, the team was assiduous in testing out and benefiting from local people’s knowledge and opinion. Before any area and its buildings were surveyed in detail by perhaps alarming observers, good notice was given and the project explained by an advance secretarial scout. Public meetings were held, recorded and minuted, at which some very pertinent ideas were advanced and acted on.

The city council caught the positive and action spirit of the exercise. Encouraged too by the possibilities of central government support, it announced the launch of a formal conservation programme. Since nothing is achieved without resources, the council decided to give it positive support with an allocation from the rates, establishing a new and possibly unique Conservation Fund. From this and for selected schemes, building-owner citizens might in addition then qualify for further assistance from any government source, such as the town schemes subsequently set up by English Heritage.

In administering the fund, and to avoid the crowding of applications at an annual date, a helpful provision was also made for carry-over between adjoining financial years. In the event the result proved to be a substantial success in encouraging private owners to invest in repairing and improving rundown properties.

The conservation consultants were reappointed and made a recommendation – acted on by a responsibly minded city council – to appoint a contact person between public and planners. He was to become the forerunner of an entire new profession – the conservation officer (1). He was given a particular hearing in considering any public financial investment and assistance. Together with him, the consultants ran a regular weekly surgery as a source of ready information and public help. In addition, a series of regular progress meetings, chaired by Cyril Morris, the city’s director of technical services, was set up to give impetus and direction.

‘Areas of special identity’ were next defined for individual study; and as the programme developed, a declining and problematical area named as Bridgegate was identified for continuing and more detailed action and remedy. A model was made of it, better enabling the periscope-examinations of the effects of any development proposals.

Perhaps above all and uniquely as the programme developed, the city authorities most observantly and cannily accepted the principle of actually purchasing key buildings – some on corner sites – whose uncertain future had in the past condemned them to neglect and misuse. Public money could then be, and was, invested in refurbishing them, returning them to the market for resale and reuse. Since conservation is undoubtedly catching, their neighbours too found themselves re-encouraged to benefit.

As the programme developed and grew, progress was reported in published reviews, describing and sharing the latest developments and ideas as a focus for local public opinion, encouragement and involvement. In a disused and centrally-situated church adjoining Chester’s famous Rows, a heritage centre was set up, showing continuous multi-projection displays of the city’s development and conservation opportunities.

A government-sponsored film entitled ‘The Conservation Game’, produced by the Department of the Environment, featured on television to celebrate European Architectural Heritage Year, and four special postage stamps were designed and issued. The very active Chester Civic Trust ran meetings and lectures, and took the initiative in reinstating the city’s High Cross, long banished elsewhere, at the previously traffic-jammed central crossing, while shopping streets were progressively part-closed and given pedestrian priority.

Widely visited, Chester’s conservation programme has received well-deserved national and international awards, including the European Prize for the Conservation of Historic Monuments (1981), and culminating in 1983 and 1989 with the Europa Nostra Medal of Honour.

Today we still have much to learn from Chester’s energetic and pioneering example.

This article originally appeared in IHBC's Context 148, March 2017. It was written by Sir Donald Insall, a consultant to Donald Insall Associates, who founded the practice in 1958, and was chairman from 1958 to 1998.

Retrieved from "https://www.designingbuildings.co.uk/wiki/Chester,_conservation_as_positive_action"
Create an article