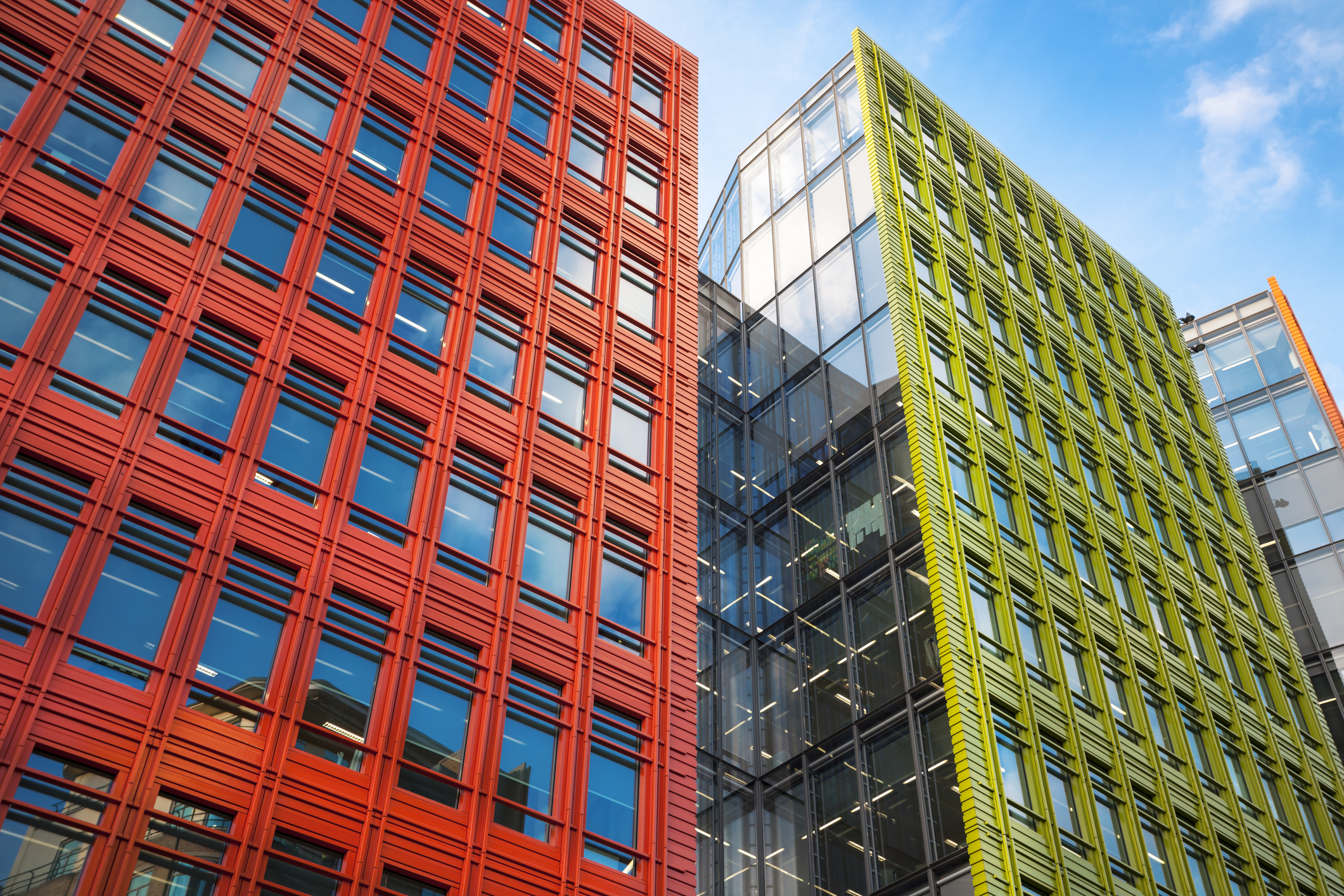 Current means for making concrete at scale do not provide satisfactory feedstock solutions for optimal systemic/life cycle health of this major building material.

Portland cement, a primary binding element in concrete, constitutes 10-15% of a typical concrete mix. In the U.S., 80.4 million tons of cement were produced in 2015, and the average carbon intensity for cement production in the U.S. is estimated at 1 ton CO2 / 1 ton cement. Therefore, though it represents only up to 15% of concrete, cement is responsible for 96% of its CO2 emissions.

As a result, for many years now, builders have been replacing cement content in concrete with supplementary cementitious materials (SCMs), industrial by-products like fly ash and ground granulated blast furnace slag, with the intent to reduce the carbon impact of the mix, but also to improve performance of concrete.

While fly ash and slag perform well in concrete, they pose environmental and supply challenges. Slag is a by-product waste from iron smelting used to make steel. Fly ash is a byproduct waste from coal fired electrical power generation. For those seeking to reduce the use of fossil fuels and associated impacts, purchase of fossil fuel by-products like fly ash can pose a conflict, particularly because power plants would otherwise need to pay to landfill this material. There are also concerns about the varying levels of arsenic, cadmium, chromium, mercury, lead, and other potentially toxic contaminants in fly ash.

There have been shortages of domestic slag and resulting price increases due to closure of a number of active U.S. blast furnaces in recent years, so much of the slag available is needing to be transported long distances to point of use in concrete. Similarly, many coal-fired power plants have closed or switched over to natural gas, reducing the amount of domestic fly ash by-product available and often increasing impacts from longer distribution chains.

Meanwhile, amidst the shortages noted above, the U.S. municipal solid waste (MSW) stream contains 11.8-million tons of glass, according to the U.S. Environmental Protection Agency (EPA). About 28%, or 3.3-million tons, of the glass was recovered for recycling, with the remaining 8.5-million tons sent to landfills due to insufficient cost-effective end uses for the glass collected. Many municipalities are even cancelling glass recycling altogether due to lack of effective end uses for recycled glass. Productive, efficient end uses for glass are much needed.

[edit] The idea and impact

Recognising the synergy in the need for: 1. more, and better SCMs in concrete, and 2. optimal end uses for recycled glass, Durst began to explore the potential for 'urban mining' of regional recycled glass to supply a much-needed supplementary cementitious material for optimised concrete mixes.

Container glass, plate glass, and E-glass comprise over 90% of the glass produced annually in the United States. About six million tons of the glass available for recycling is flint green and amber container glass, bottles collected via curbside pick-up and central drop-offs. This stream is typically sorted at material recovery facilities to isolate the glass based on colour, for sale to bottle manufacturers.

However, about one-third of the glass is finer than 3/8”, which is not economical to optically colour separately. Since it is not necessary to colour separate glass to use as a pozzolan, given it all turns white when ground to proper particle size, this ~1-2 million tons of glass can be readily sourced for cleaning and grinding into use as a pozzolan in concrete. The ongoing total amount will depend largely on consumer glass recycling rates in larger urban communities.

Plate glass is clear or tinted float glass from building glazing and car windshields. Approximately 1.5-2 million tons in the form of window trim, defective factory windshields, and post-consumer windshields and building window glass can be recycled. The major current markets for recycled plate glass are glass spheres used for traffic paint and also for rheology improvement, and it is estimated that 400,000-500,000 tons would be available for the glass pozzolan market. This glass can be processed to 99.9% purity, as it does not need to be separated from urban waste stream contaminants.

Lastly, E-Glass is recovered from the manufacture of fibreglass reinforcements at the factory. It is processed from undrawn fibre waste, and grinds into a pure white powder without any fibre remnants. There are approximately 200,000 tons currently available.

Some combination of the above glass sources is most often regionally available with good potential for minimised transportation radii between generation, sorting, processing, and reuse locations. Also, glass is very dependably uniform in chemistry and contains no heavy metals, which are important considerations for the health, safety and performance of the concrete in which it is used.

In 2014, The Durst life cycle established Building Product Ecosystems (BPE) as a public/private partnership with City University of New York, The New School, Vidaris Energy and Environmental, and Healthy Building Network, to make systemic improvements to the health of concrete and other high volume building materials.

The primary mechanism for BPE progress has been pragmatic monthly working groups, including one for Glass in Concrete. These working groups were established in May 2014, and continue today, through the establishment of Building Product Ecosystems (BPE) as an independent LLC in early 2016, based on a collaborative consulting model.

In and around these meetings, ongoing dialogues are held among building officials, project team engineers, glass pozzolan makers, and concrete batch plants to best determine what additional laboratory and field testing is needed for approval of this new technology.

Forward-thinking pilot projects spearheaded by Durst at Halletts Point, Queens; by NYC Department of Design and Construction in NYC sidewalks; and by Google in Mountain View campus development are being implemented, within the context of active construction to readily vet jobsite logistics.

Thus far, we understand that glass pozzolan has highly uniform chemistry, is free of heavy metals. It produces a higher albedo concrete that is lighter in colour, aiding in suppression of urban heat island warming. It also contributes to effective, consistent strength gain (very similar to fly ash) with favourable low permeability and reduced water demand. Glass pozzolan has also demonstrated ability to mitigate alkali silica reaction. Pours on jobsites have indicated good workability, with no problematic challenges to date.

While glass pozzolan concrete performance and workability are being piloted, the same is true for supply chain and material sourcing logistics. Recycled glass sources are being vetted for volumes, cleanliness, particle sizing and consistency. Processing progress is underway to work with existing or build new equipment that can effectively clean and grind to a consistently clean final product with proper uniform sizing, ready for use. Planning for batch plant silo space allocation to glass pozzolan is also in the works.

To establish quality controls and streamline careful implementation at scale, new ASTM standards are also being iteratively written and balloted within proper committees. This process can take good time, but efforts are being undertaken to expedite progress via frequent meeting and proactive outreach to concerned constituents. Education is also underway with various structural engineering communities and concrete trade life cycles, to ensure the necessary implementable, pragmatic information is widely available.

Through a highly collaborative, transparent approach to innovation that is careful but proactive in exploring possibilities for building better buildings and infrastructure it has been possible to learn a great deal and make good progress in a short time.

Systemic improvements that fully consider cradle to cradle impacts and synergies across sectors will be increasingly possible working together in this fashion.

Retrieved from "https://www.designingbuildings.co.uk/wiki/Urban_mining_to_reinvent_concrete"
Create an article