For many years the UK has been freewheeling from the industrial revolution and its historic maritime power. The Victorian empire funded and constructed vital infrastructure and the meridian through Greenwich allowed the City of London to trade with East and West in the same working day. This, and a stable democracy allowed UK service industries to become world class and a major contributor to GDP.

However, having only a single tunnel to the great land mass of Europe puts the UK on the side lines in terms of road and rail transportation and could, in the long term, reduce the dominance of the service industries.

Air traffic does not differentiate between islands or continents and it is essential that the UK invests in this form of international travel and communication if it is to hold its position in the world.

However, politicians recognise that any decision to expand airports is going to lose votes and so it has been deliberately delayed until the UK Airports Commission chaired by Howard Davies produces its final report and recommendations in 2015, after the next general election. The vested interests both in the ownership of airports and airlines have every financial incentive to preserve the status quo by expanding existing facilities at Heathrow, Gatwick and Stansted. Their shareholders, like the politicians have their focus on short term returns.

Air travel particularly in the East is expanding at an ever increasing rate. The majority of hub (passenger international transfer facilities) airports have been built inland, in close proximity to capital cities, or started their life for military use. In the early days of aviation with light aircraft and a relatively small number of passengers little thought was given to noise pollution and the safety of residents under flight paths. Currently however, all the major airports in Europe are operating on a restricted 17-hour basis to avoid night noise nuisance and are operating at full capacity.

There is, therefore, a limited once-in-a-lifetime opportunity for a European country to develop a 24-hour operating hub airport with the capacity for handling 150m passengers and over a million flight movements a year. Four runways are necessary to accomplish this. Whichever European nation decides to do this first will dominate its potential competitors, linking with Beijing, Dubai and New Mexico which have already put such plans into action. The investment case is economically viable for only one such airport in Europe.

Although the Airport Commission 2013 interim report failed to shortlist the Thames Estuary proposal it did not rule it out, and asked for further details by posing 96 questions.

At present, Heathrow is considered to be the UK's hub Airport, although landing charges are the second highest in the world. BA have moved all its international operations out of Gatwick and invested heavily in Terminal 5. Heathrow operates on a restricted 17 hour day on two runways. Its 480,000 air traffic movements per annum require 98.5% utilisation on two runways which results in chaos if any incident causes operations to cease. A third runway operating at 98.5% utilisation might extend air traffic annual movements to 740,000. However, it would increase the number of people affected by over 55DB noise levels in London by 30%. In addition, it falls short of matching the 1,200,000 air traffic movements planned for Thames Estuary based on 85% utilisation.

Despite this, if the December 2013 interim report by the Howard Davis Commission holds the clues to the final draft, the Commission is likely to recommend a third runway at Heathrow, a second runway and terminal at Gatwick and some expansion to Stansted. In other words a compromise will be recommended that is a short-term fix which increases the level of noise pollution and reduces the safety of residents across the south of England.

All three of these airports have limited potential and the UK will not meet the criteria of a world class hub. In such a scenario the UK is in danger of losing its place in the air travel business and suffer a substantial blow to its current competitive edge in City trading and its associated services. While reaction to such a compromise will be popular with the airport and airline lobbyists, much of the country’s population is going to oppose such airport expansion, not least the 5 million people under the Heathrow flight path. 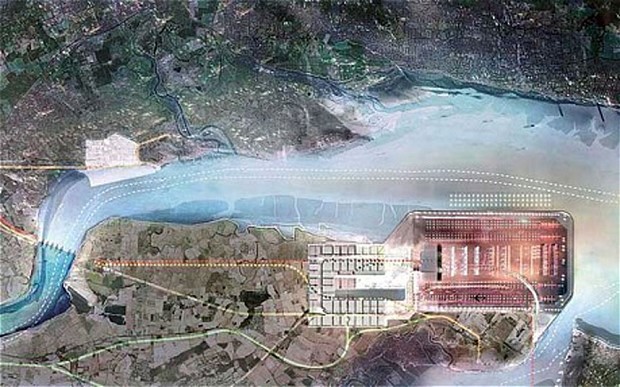 [Image source: The Telegraph, 'Boris Island' airport plans to be ruled out by Heathrow report. 16 December 2013.]

The Foster/Halcrow masterplan proposes a new hub airport in the Thames estuary. The scheme involves take off and landing over the sea on four runways served by two linked terminals allowing a 24 hour operation and future proofing expansion capacity. The proposal comprises a 8.7 km long, 4.2 km wide platform at a height of +7 m odn.

The platform is to be built partly on existing land and partly on reclaimed land in the Thames estuary. The site is 65 km east of London and 15 km from existing strategic high speed road and rail connecting links. Development can be phased initially with three runways to accommodate 110m passengers and 192 aircraft stands by 2025 and 150m passengers and 256 stands in 2050 using four runways.

Rather than disturbing millions of UK residents the airport plan involves compensation and re-location of 3,000 homes and brings thousands of construction and operation jobs to one of the most socially deprived regions in the South of England.

The new airport would require a road and rail link system across 15 km (9.3 miles) of largely uninhabited land. The rail system would link to Hoo junction and Ebbsfleet to maximise choices of travel on the rail network. This includes linking by HS1 and HS2 to the Midlands and North and to Crossrail.

The journey to St Pancras Station would take 26 minutes and Waterloo Station 40 minutes. The link to H1 would attract international air passenger traffic via Eurotunnel. A short motorway link would connect to the M2 and then M25.

[edit] The main objections to the Thames estuary development

Paragraph 6.35 of the Airports Commission interim report in Dec 2013 suggested that, "The overall costs of an Isle of Grain airport would be extremely high. The Commission’s independent assessment suggests that they could total as much as £82-112 billion by 2030, including surface access costs and allowances for risk and optimism bias". However Boris Johnson said this was "...far in excess of the costs experienced in many other countries that have completed similar projects, and is contrary to independent assessments of experts and private financiers”.

The cost includes land acquisition and transference costs from Heathrow. Set against this are higher revenues through a substantial increase in business and tourist passenger traffic as well as increased air freight movements using slack time night slots. The Channel Tunnel would provide additional revenue not currently attracted by Heathrow.

The closure of Heathrow and its sale for commercial and much needed brownfield residential development would generate a further return on capital. A major new urban centre to the west of London could accommodate 190,000 residents and 90,000 jobs with some of the best transport links into central London. The indirect GDP value to the UK economy as a whole is inestimable.

The second phase, expanding to a fourth runway and associated facilities planned to be opened in 2050 requires a further £13bn. Econometric modelling by Oxford Economics has attempted to put numbers to the increased revenue potential that show a ten year payback on the initial investment.

Another way to look at it is by considering the long-term cost to the country if the UK withers on the vine by not taking this opportunity.

The airport platform would reclaim 18 sq. kms of wet marshland, reducing it by 38%. As far as general airport activity is concerned birds have consistently shown resilience and grown used to such activity up to 75 db noise levels which will only be experienced on the platform itself.

In Europe there is now a wealth of successful experience of large-scale habitat compensation schemes where coastal agricultural land has been turned into marsh wetlands and there are several ongoing schemes:

The proposed location is not a major flight path for birds. Modern technology allows air traffic controllers to manage this risk and avoid occurrences, which pose a risk to all airports. Between 1998 and 2002, Heathrow recorded 268 birdstrikes and Gatwick 201.

Most of the wading birds stay grounded foraging for food. Brent geese, plovers and shelducks are the main varieties of species found on the Thames Estuary and Marshes, the Medway Estuary and Marshes and the Benfleet and Southend Marshes. A 13km zone clear of the airport is the area to be monitored and clear of bird flocks in the sky.

The platform, at 7 m above sea level, allows for the highest tide surges and wave patterns, it is also high enough to achieve drainage falls to cope with exceptional storm water. The platform edges would be protected by a shallow gradient of rocks to obviate storm spray.

Modern cockpit technology has done much to combat the problem of poor flight visibility levels. Records taken of the area in 2013 show that over a period equating to 15 days in the year, visibility was below 1,000 m, mainly between the hours of 4am to 6am. Poorer visibility under 200 m amounted to two days. 2010 proved the worst year on record and might have affected runway utilisation for 2% of operating hours. This is comfortably covered by the planned schedule of 85% utilisation.

The tanks and plant have a limited shelf life and need to be replaced by 2025 and so could be relocated elsewhere if necessary.

This ship packed with unexploded ordinance has being lying on the ocean bed in the middle of a shipping lane for over fifty years. The hull is deteriorating and sooner or later the problem has to be addressed. It lies 4.8 km to the east of the proposed platform and given today’s technology it should not be used as an excuse to prevent development in the location proposed.

There is an overwhelming case for a long-term solution to the country’s aviation strategy if politicians are bold enough. However, vested interests and caution are pointing to a fudged short-term solution and a missed once-in-a-lifetime opportunity.

Our Victorian ancestors were more entrepreneurial. We know what they would have done in the circumstances.

NB On 5 June 2017, Chris Grayling MP, Secretary of State for Transport made a statement to parliament setting out final proposals for an Airports National Policy Statement (NPS) signalling a commitment to the expansion of Heathrow Airport with the creation of a new north-west runway. For more information see: Heathrow Airport expansion.

One important point being, if one of our competitors is going to do it we should take the impetuous and do it first.