This article originally appeared as a BSRIA blog post, 'Indoor Air Quality a health and wealth issue for us all' written by Peter Dyment, Air Quality and Energy Consultant – Camfil Ltd and published in January 2014.

Indoor air quality (IAQ) is a slightly vague concept to most people. When asked they tend to adopt the Goldilocks principle. Not too hot, not too cold, not too damp, not too dry. This reflects the fact that for many generations now we have had the means to control our home and work environment with comparatively little discomfort and little attention being required.

However, the golden age of low-cost energy and apparently limitless resources seems to be coming to an end. Sustainability is the order of the day. We are all waking up to the real value of energy and the environmental cost involved when linked to our population growth. One cost is the realisation that in cities and near busy roads in the UK there is no longer such a thing as clean fresh air.

We all breathe air to live and if it is polluted or carries airborne diseases we can fall ill as a result. Airborne hazards such as carbon monoxide or longer-term indoor threats like radon release are sometimes a problem but the toxic fine combustion particles mainly from traffic emissions and some power stations are the major health risk to the public at large.

If we can't control the weather and have trouble on a national level controlling air pollution then we can at least try to control indoor air quality. Ventilation is needed in buildings to replenish used oxygen from the air and displace the carbon dioxide we exhale.

The British and European standard that gives us the indoor air design parameters is the rather long titled BS EN 15251:2007 Indoor environmental input parameters for design and assessment of energy performance of buildings addressing indoor air quality, thermal environment, lighting and acoustics. This also adds the parameters of light and sound levels which can enhance or blight an inside environment.

There has been concern expressed that in the urgent quest for energy savings in large building HVAC systems engineers have been turning off or turning down plant to save energy at the expense of poor building Indoor air quality.

Effective air filtration was shown to be the easiest measure to implement and gave the best reduction of incoming pollution with minimum effort.

Anybody can now access information on air pollution levels in their locality. There is a national monitoring network run by DEFRA and the local authorities. The Kings College website even allows Londoners to enter their post code and directly get a map of historic readings on their doorstep. 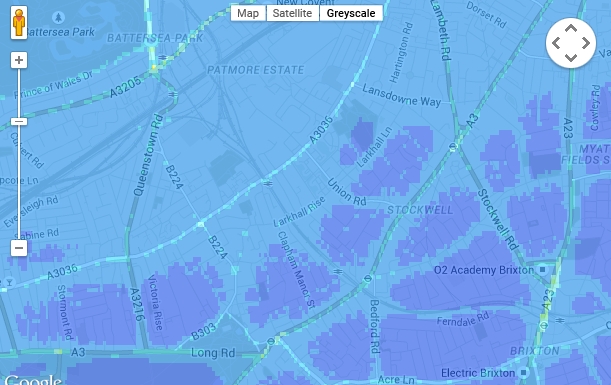 The 2013 study by Rob Beelen and his team on PM2.5, published in The Lancet, estimates that for every increase of 5 microgrammes per cubic metre (5 µg/m3) in annual exposure to fine-particle air pollution (PM2·5), the risk of dying from natural causes rises by 7%. A simple calculation indicates a routine increase in the mortality rate in central London of over 20% as a result of high levels of PM2.5 mainly from traffic emissions.

Natural causes of death in this instance can be respiratory and cardio vascular disease and recent analysis of data by the Campaign for Clean Air in London has highlighted that air pollution is one of the exposure categories causing all the top four male death categories and four of the top five female death categories in London i.e. ischaemic heart diseases; malignant neoplasm of trachea, bronchus and lung; chronic lower respiratory diseases; and cerebrovascular diseases.

It can be seen that the evidence is now compelling and action is now required both at a national level and on a personal level to ensure the air we all breathe is clean and healthy. Some measures such as effective air filtration and air-sealed buildings can mitigate exposure to this air pollution in the short term.

NB In February 2016, the Royal Colleges of Physicians and of Paediatrics and Child Health suggested in their report Every breath we take: the lifelong impact of air pollution that air pollution in the UK is '...contributing to 40,000 early deaths a year in the UK'. See BSRIA responds to UK Air Pollution Report for more information.

In February 2016, the Royal College of Physicians published 'Every breath we take: the lifelong impact of air pollution' in which they claimed that each year in the UK, around 40,000 deaths are attributable to exposure to outdoor air pollution. It also highlighted indoor air quality problems resulting from kitchen products, faulty boilers, open fires, fly sprays and air fresheners.