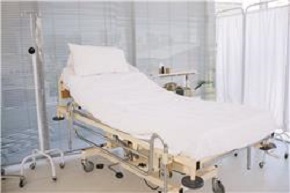 BSRIA has collaborated with the Department of Health in the publication of the guidance 'HBN4 Isolation facilities for infectious patients in acute settings'. The standard refers to BSRIA’s forthcoming technical standard 'BTS 03: Air permeability of isolation rooms'.

The methodology detailed within the standard enables isolation facilities’ air permeability levels to be validated as well as design air flow-rates between adjacent rooms, pressure stabilisers and doors to be verified.

In the case of negative isolation rooms, protecting the patient from a secondary infection should be considered too. Some designs include a positively pressurised ventilated lobby (PPVL) and a neutral room. The PPVL design can be used for both immunocompromised and infectious patients.

In addition to the use of the isolation suite and the pressure differentials, designs include (or should include): ventilation rates (air change rate ACR), flows from one room to another and air flow rates through components such as doors, door grilles or pressure stabilisers. International guidance on the design of isolation rooms varies from one country to another and there are large differences in the recommended ACR, pressure differentials, internal design of the room, etc. There is very little information about air permeability requirements; only the UK has some recommendations.

Achieving low levels of air permeability is essential; not only does the integrity of the walls offer protection during normal operation, but also in the event of fan failure, which can cause the room to operate at different pressurisation levels, walls become the first point of defence against airborne infection.

The limit recommended by BSRIA is 2.5 m3/h/m2 at 50 Pa, or lower. This is based on BSRIA's testing experience, although much lower levels (1 m3/h/m2 at 50 Pa) have been obtained in isolation room mock-ups built and tested in their laboratories. BSRIA’s work on isolation rooms has demonstrated than an air permeability level of more than 2.5 m3/h/m2 at 50 Pa can be equivalent to having a leaky closed door at 10 Pa, where approximately 60 l/s of contaminated air can travel to areas where personal protective equipment (PPE) against airborne infection is not worn (e.g. hospital corridor). Ultimately, it will be the infection control team’s decision whether this is an acceptable risk or not.

In addition to protecting against airborne infection, a low air permeability level assists during the commissioning of the rooms. During commissioning, it is frequent to find problems with the room not achieving the desired pressure. This leads to further problems such as pressure stabilisers not opening. A room with a low air permeability level will achieve the design pressurisation levels with the design supply flow-rate.

The BSRIA standard is used to quantify the air leakage of the overall isolation suite and the rooms that form it. The standard also offers a methodology to validate design flow-rate through pressure stabilisers, doors and door grilles. The testing methodology is based on ATTMA standards for air permeability testing. The number of tests required is specific to each isolation suite and two testing examples are described in HBN4. Carrying out the air permeability tests takes approximately one day.

In conclusion, testing and achieving low air permeability levels in an isolation room will help the rooms achieve the design pressurisation levels and flow-rate levels during the commissioning process and reduce the risk of infection between the room and adjacent areas during normal operation and in the event of fan failure.

This article was originally published here in February 2018 by BSRIA. It was written by Blanca Beato Arribas, Asset Performance Team Leader, BSRIA Test.

Retrieved from "https://www.designingbuildings.co.uk/wiki/Air_permeability_in_isolation_rooms"
Create an article