Isolation rooms for the prevention of airborne transmitted diseases have traditionally been designed depending on the risk of infection and the hazard category of the pathogen. Most designs use pressure relationships to minimise transmission between those inside and outside the room. Inside the room, a well-mixed dilution ventilation used to rapidly exhaust pathogens and avoid areas of higher contaminant concentration that may expose a person, such as a healthcare worker or a visitor.

Two designs of isolation room were tested by BSRIA on behalf of the Department of Health of England and the Department of Health, Social Services and Public Safety of Northern Ireland. The first consisted of a positively pressurised ventilated lobby (PPVL) and neutral pressure patient’s room and en suite (Figure 1a), with an in-room ventilation rate of 10 ACH.

The second room operated with the same pressure and flow regimes but was designed to provide intensive care, therefore the heat load from the hospital equipment was much higher and it did not have an en suite. These PPVL rooms effectively create protection from infections originating in the room (equivalent to a negative pressure isolation room) and from infections originating in the corridor (equivalent to a positive pressure type).

BSRIA studied the ventilation and protection levels for staff within and outside an isolation room. Anemometry, smoke, particle and gas tracer tests were used to investigate air mixing and the implications pressure differentials have in the effectiveness of an isolation room.

Further tests carried out at the University of Leeds studied the influence of room layout (see Figure 2) and the risk of exposure when staff were very close to the patient and also compared the behaviour of tracer gas to an aerosolised bacteria (Bacillus subtilis).

Studies were carried out through full-scale experiments in a PPVL mock-up room, a real hospital intensive care unit (ICU) isolation room and a bioaerosol facility at the University of Leeds. People simulators or DIN-Men (See Figure 3) were used to simulate the heat load from staff and patient. Flow visualisation using smoke from a generator and smoke pencil was an important diagnostic technique to characterise air flow patterns.

Room air movement surveys provided air speed and temperature data in the isolation room, to investigate thermal comfort issues. A vertical array of anemometers was used on a grid of points on the floor. This data was then used to plot 3D plots of the temperatures and speed within the isolation room and as input data for computational fluid dynamics (CFD) modelling, especially when investigating the pressure stabiliser.

Nitrous oxide (N2O) and Carbon Dioxide (CO2) tracer gases were used to simulate airborne infection and to quantify and characterise the patterns of air movement produced within the isolation room. In the gas tracer tests (denoted as GTT) a known flow rate of gas was released from different points in the room (bed, sink, lobby, corridor) and the concentrations were measured around and outside the room when steady state had been reached. Most of the tests were done with the door closed, but the room was also challenged by leaving the door open, repetitively opening and closing of doors and simulations of fan failure.

For both gas tracer and bacteriological experiments, the sampling points were located around the bed at the same distances from the source (0.5, 1.0 and 2.0 m). Two DIN men were used to simulate the heat loads from a nurse and patient. Six tubes were located at 1.45 m (breathing height) around the bed, and an extra tube was connected to the extract. Sample locations are marked with crosses in Figure 2. Aerosolised bacteria was released from the “mouth” of the DIN man-patient.

[Figure 2 Bed positions (a) and (b) for tracer gas and bacteriological tests in the University of Leeds bioaerosol chamber.]

[Figure 3 Picture of the University of Leeds room during gas tracer tests (above) and bacteriological tests (below).] 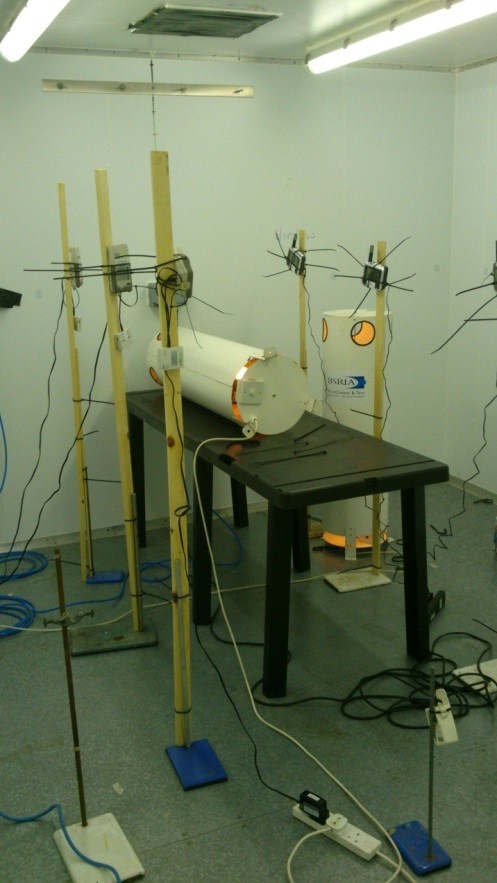 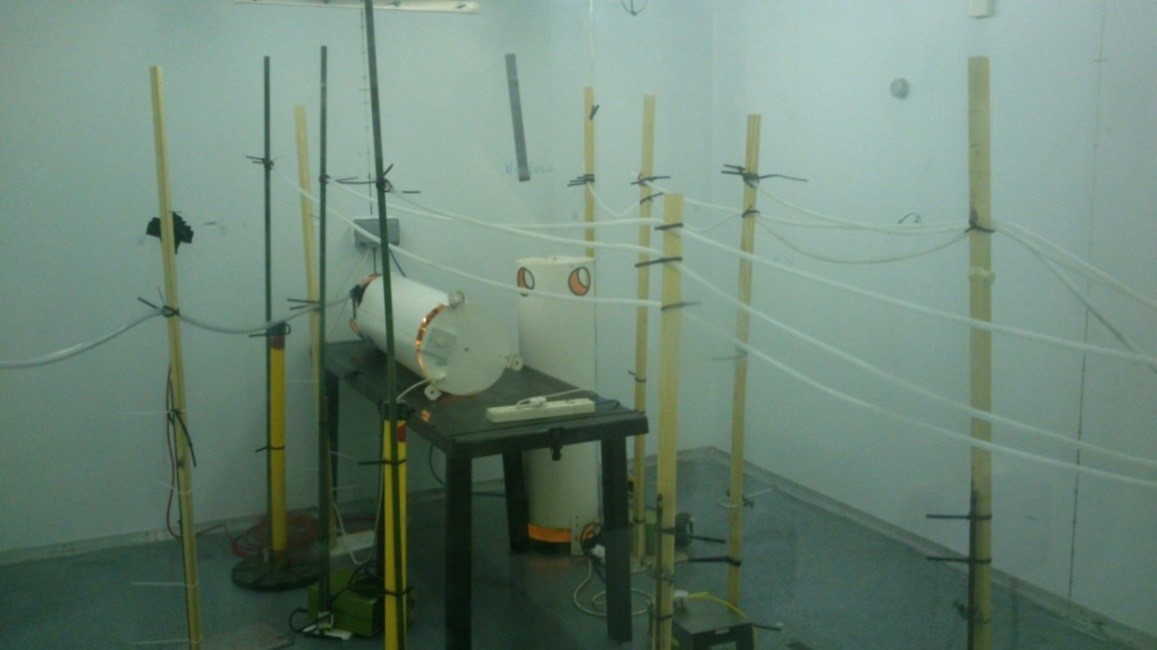 The investigations provided evidence to validate the PPVL isolation facility.

Results in the PPVL mock-up and real hospital ICU room showed that the rooms were fundamentally well mixed and showed rapid recovery from perturbations and simulated fan failure. Testing the same design under positive and negative pressure configurations showed that within the isolation room, the direction and magnitude of pressure gradients had no bearing on the conditions. GTTs also showed that there was no direct relation between the protection levels in the room and the pressure difference with its adjacent areas.

The quality and quantity of internal flow patterns determine the effectiveness of the dilution ventilation. In both designs, typical N2O levels in the extract represented a dilution of 10^3 relative to the source. Values measured in the rooms were normalised against the extract concentration and results show that concentration levels are within the same range in the same room under different pressure regimes. The concentration outside the room was under the minimum detectable concentration of the instruments used, which indicates that the protection levels were at least 10^5.

Bacteriological results and GTT results from the University of Leeds study were comparable, and as expected the concentration was higher near the release point with the bed in position 1 (See Figure 2). The effects of the ventilation design, particularly the fresh air supply location can be seen in position 2, which showed a lower concentration, in both bacteriological and CO2 experiments.

This article was originally published by BSRIA as Design of isolation rooms for infection control in June 2015.

Retrieved from "https://www.designingbuildings.co.uk/wiki/Design_of_isolation_rooms_for_infection_control"
Create an article