Ramboll discusses the redevelopment of the King's Cross neighbourhood in London, and how digitisation is contributing significantly to how they design, engineer and construct in new and different ways. 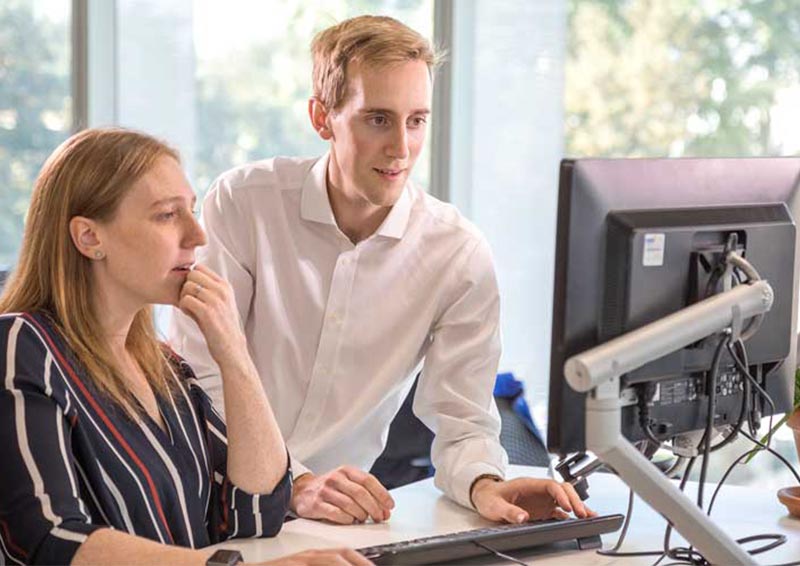 "We cannot continue to engineer as we have done for the past 100 or 200 years," says Alex Lawrence, Head of Building Structures at Ramboll in the UK. "Technology is advancing."

The construction industry famously lags far behind other main industries in terms of technology adoption and increases in productivity. Ramboll, the Danish engineering consulting firm with offices around the world, sees digitalisation as key to overcoming historic shortcomings industry-wide. "We have much more data to play with, and it allows us to design, engineer and construct in a different way, in ways that we have not thought of yet," Lawrence adds.

Ramboll's recent redevelopment of the Kings Cross neighbourhood in London and a residential complex in North London exemplify the materialisation of these advances. For both projects, project engineers relied heavily on the digital tools provided by Bluebeam's software solutions Bluebeam Revu and Bluebeam Studio, and Lawrence believes these tools and other digital advances will be invaluable to successfully navigating the next 100 years of engineering challenges.

Andrew Mather, Principal Structural Engineer at Ramboll in the UK, sees Revu and Studio as critical to the level of collaboration that has become ubiquitous for projects involving engineers, builders and owners from around the world. "Using digital design tools means that we can coordinate much faster in a much more accurate way and then achieve much higher levels of productivity," he explains.

Among Ramboll's projects is Dalston Works, a 10-story, 121-unit apartment complex that will be the world's largest cross-laminated timber (CLT) project ever built. Necessitated by poor soil conditions and continued underground development, the CLT-built apartment will be significantly lighter than it would have had it been designed with concrete, and it will save 2,400 metric tons of carbon compared to a concrete frame.

However, the building came with specific challenges, as Mather explains: "The cross-laminated timber panels were fabricated in Austria weeks before they were actually installed on-site. All the openings, all the doors, all the windows needed to be accurate on everyone's drawings and in the fabrication model. What Revu enabled us to do was to overlay information from different sources and ensure that there were no errors. In coordination with other 3D models, we were then able to ensure that the design team was fully aligned before it went into fabrication."

Without digital tools, that kind of close coordination would have taken considerably longer, and would have required extensive use of paper drawings as well as face-to-face meetings. Both would have added to the build time, possibly caused scheduling delays, and increased the possibility for error. Instead, Revu allowed all changes to be made digitally and tracked, so each party knew exactly who had made a change, and when. Then, individuals could comment on that change – for instance, marking something 'Approved' with a stamp, or requesting more information or further revisions.

At Kings Cross, a redevelopment zone which saw Ramboll working on 15 different sites, coordination and planning ahead were absolutely critical. Revu allowed all parties involved to anticipate the challenges that lay ahead, in a familiar file format—PDF—that everyone could understand.

"We have had huge benefit from 3D modeling and coordinating in a 3D environment. Revu has been an accessible platform for everybody to understand that coordination and anticipate challenges that could happen on-site," says Ruth Johnson, a Principal Structural Engineer who worked on the project. Using the overlay and compare functions in Revu allowed the engineering team to tackle issues before they were subject to time pressures.

One of the projects at Kings Cross involved a concrete building and managing the information surrounding the building's reinforcement. Johnson says that being able to use Revu on-site allowed her to make changes while consulting with the building team in real time, and then send those changes back to the office or insert them into the master documents.

"Revu has been invaluable for me to be able to quickly understand what was designed, what implication that might have and then communicate that to all the people that need to be involved in implementing that change. That has been hugely valuable," she adds.

It's an accepted industry maxim that engineers never design the same thing twice, but that doesn't mean it wouldn't be useful to have an easily accessible archive of past projects. "By using digital design methods," says Mather, "we are able to bring some of our knowledge from previous projects and some of the actual detailed design understanding to projects in the early stages to make informed decisions and mitigate risks."

This eliminates complications at later stages, where changes can be costly and eat up valuable time. At Kings Cross, that meant that engineers on separate projects could communicate through their work, sharing documents, experience and wisdom gained from past jobs. For instance, solutions that address certain soil conditions or local safety regulations can easily be adapted from one project to another to fit the new set of specifications.

More broadly, Ramboll takes advantage of the Tool Chest feature in Revu to build a working institutional memory. Through the company server, each Ramboll Revu user has access to the same set of digital drawing tools, symbols and security features, allowing engineers to grab and go and ensuring an output of high-quality sketches.

At Dalston Works, building services engineers were able to use the Tool Chest to markup the engineering document to show where mechanical pipes would be installed. "Its ability to be customised to different users and how they use it is one of Revu's key features", Mather says.

Today's clients are expecting projects of higher quality than ever before, while demanding them within a shorter turnaround and for the same price. That means engineering firms that aim to thrive in the 21st century will have to embrace technology that increases productivity and efficiency, without sacrificing the careful oversight that helps ensure safety and mitigate risk.

Lawrence has strong feelings about where the construction industry needs to go. "If you look at data that goes back for the last 10 years, the construction industry really does lag behind in terms of productivity growth compared to the rest of the UK." Digital design allows engineers to realise the value and productivity, but also the structural form and elegance they—and the project owners—wish to create.

"The construction industry can be a dangerous place," says Johnson. "Revu, as a platform, was key for communicating risk. A key part of on-site health and safety management is making sure everybody understands any residual risk involved. Revu and its powers to very quickly edit information you are given meant I could markup and highlight risks very, very clearly."

As has been heavily reported, the construction industry is in the midst of a crisis: There's a massive skills shortage, and there simply aren't enough good candidates to fill jobs. One way to retain valuable workers and attract new talent is by making the work more enjoyable. As Mather sees it, going digital is a tactic companies can use to overcome the skills shortage.

"With tools such as Revu, the admin work can be greatly reduced such that we can spend more time on the more innovative aspects and driving value in projects. It is through examples such as Dalston Works, with it being a world first, that we can have the most fun on projects." And who doesn't want a job that's more fun and less boring? When run-of-the-mill tasks are taken off an engineer's plate, they can focus on what really matters. The benefits of this are far-reaching: higher workplace satisfaction, greater efficiency and a building that people are proud to say they worked on.

When the discussion turns to digitalisation and automation, many often worry that's code for machines taking the place of humans on the jobsite. But that's not how Ramboll sees it. "The future of construction most definitely involves human input and being able to combine the creativity of the human mind, but it also requires the power and the aid of the digital design tools," Mather upholds.

By allowing for more collaboration through Studio, and by taking advantage of tools such as Batch Link and automatic measurements, much of the rote computational and repetitive work is removed from the engineering process. Engineers can focus on engineering and can be assured that the automated measurements Revu is producing are accurate. Not everyone who starts employment at Ramboll will be an experienced Revu user so the software's vast customization options and usability at any skill level are a huge asset for the company.

Lawrence understands the need to empower engineers to do their best work. "We invest heavily in our own technological development," she says. "We have a big suite of digital design tools that we use and develop in-house. However, we also like to partner with external companies and use their software that is readily available. Bluebeam is a key example of that."

As the construction industry confronts slim margins, the skills gap and clients expecting more in less time and at the same cost, companies will have to undergo fundamental changes in the coming years in order to survive and thrive. Ramboll has chosen to embrace this moment as the perfect time to reinvest in technology and in their employees. So much of engineering is now about computer coding and parametric design, rather than pen and paper. By combining human creativity with the power of digital software, "we can create the best products in a much quicker way," Mather says.

Lawrence calls this moment "the third industrial revolution." Facilitating coordination between parties, harnessing the power of data and ease of use are all factors that have inspired Ramboll to rely so heavily on Revu and Studio. "It's very simple, it is very easy to use, it has a simple user interface, and it can be used by everyone in the construction chain, from consultants all the way through to subcontractors on-site," says Lawrence.

Digital design is the mindset of the future. If Kings Cross and Dalston Works are any indication, Ramboll is at the forefront of an exciting, and digital, new era in construction.

This is a sponsored case study provided by Bluebeam. Views expressed do not reflect those of ICE.

This article was originally published here by ICE on 16 May 2018. It was written by George Kalathil.

Retrieved from "https://www.designingbuildings.co.uk/wiki/Digital_21st_century_-_Ramboll"
Create an article