Timber is now acknowledged as a material used to build ‘healthier hospitals’ (TRADA 2017) due to its environmental benefits and therapeutic qualities.

This study aimed to undertake research into lightweight, structural timber elements with varied lattice infills for low-rise construction, particularly for hospices and palliative care facilities, where uplifting spaces are essential for therapy, treatment and end-of-life care. Three full-scale column prototypes consisting of diamond-, triangular- and circular-lattice infills were fabricated and tested to determine whether the geometrical arrangement of the internal lattice structure affected the compressive strength of the column. The columns created are part of a modular construction system for the portal frame that would be exposed in the kitchen/dining area and the staffroom to the chapel in Maggie’s Windermere.

The study was highly important to assess whether the columns could satisfy the structural requirements needed to support the cross-laminated timber (CLT) roof system. Results found that all columns performed well beyond the minimum structural requirements to support a roof load of 2kN/m2 which means each column can be considered safe for use in construction. Findings concluded that the porosity volume (cellular voids) had a significant impact on the compressive performance – the column with the circular lattice proving to be the highest performing column failing at 31.46kN (3.16 tonnes), due to the increased surface area of material. Nevertheless, the diamond lattice infill column was an efficient lightweight alternative.

Due to the bespoke nature of timber lattice structures, there are limited research publications associated with cellular loadbearing elements in construction. Maggie’s Manchester designed by Foster + Partners is a pioneering case study for the implementation of Laminated Veneer Lumber (LVL) timber lattice beams used as a modular component to form the lightweight portal frame structure.

The design encouraged the author to research into other shapes. Compression tests commenced on all three columns until each column reached complete failure, with the minimum roof load threshold of 2kN/m2 considered. Each timber lattice column was positioned horizontally on a large ‘I’ beam testing rig. 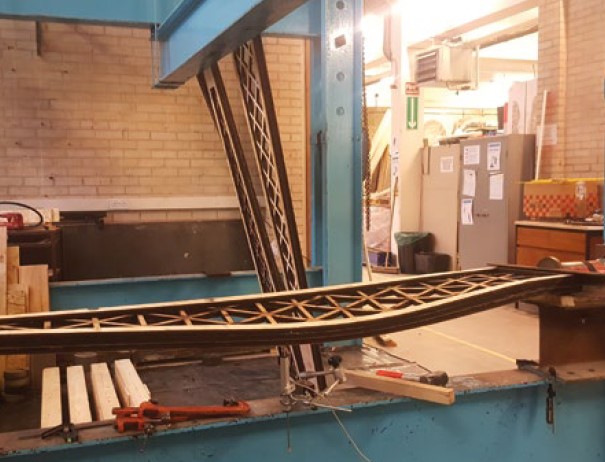 The wide cantilevered tip of the column was secured into the loading jack connected to the hydraulically controlled cell which applied compressive load. The loading cell controlled the rate of load with two linear transducers used to measure displacement. The transducers were positioned underneath the column to measure its flexural bending behaviour as compressive load was applied while a transducer located on the loading cell assessed how each column performed under stress, observing for evidence of delamination and deflection in the columns.

The transducers provided graphical information on the flexural behaviour and compressive performance of each column. The typical behaviour of all columns was to gradually deflect in response to compressive load.

The lattice columns were unexpectedly flexible as they showed signs of torsional strength where the column started to twist before rupturing into complete failure. However, the test exposed the performance materials when undertaking material analyses; the modes of failure were determined by delamination as the buckling force led the wood veneer to split which then transpired to the adhesive failing and causing the layers to separate, leading to material failure of the WBP plywood. All prototypes were fabricated using three standard-sized sheets (1,220mm x 2,440mm) of water boil-proof plywood; the columns were designed to fit on standard ‘off-the-shelf’ sheets supplied by manufacturers in the UK. Using off-the-shelf products meant that making the columns did not require any bespoke manufacture. The selection of water boil-proof plywood – an economical timber composite – was selected due to its cross-laminated properties. However, the key focus of the test was to assess the correlation between the lattice geometry and compressive strength as opposed to examining the quality of material. Plywood would not be appropriate for palliative care facilities.

The project embraced CAD programmes and construction technologies throughout to aid the fabrication process. The lattice column profiles were drafted as a two-dimensional drawing using AutoCAD software during the preliminary stage to aid the laser cutting manufacturing process of the 1:1 (full-scale) prototypes. These were then input into Sketch-Up (three-dimensional modelling software) to gain an understanding of the column volumes forming the portal frame system. The use of CAD was an instrumental factor towards preparing for fabrication.

The aim was to maximise the use of CAD to design prefabricated elements accurately to allow a faster and more efficient building construction process. Each lattice column consisted of three components that were bonded together with adhesive.

Using a mechtronic laser, the specialist system read the two-dimensional AutoCAD drawing generated to cut the column profiles rapidly and precisely to the desired dimensions. Had the fabricated components been created manually, the fabrication time would have been compromised, with the inevitable inconsistencies exposed in the detailed geometrically-arranged lattice cores which would have affected the validity of the test.

Utilising CAD is the optimal design method to achieve prototypes to the precise measurements desired using CNC machinery, which is recommended to achieve a professional finish instead of laser technology to avoid charring the finished product.

The idea behind developing a truss design with cellular voids derived from first, the design concept of bringing strength and lightness to uplift the centre users, second, from an interest in revamping familiar traditional construction methods/systems with unique, lighter and more efficient structural elements. Architectural technology was involved in investigating and understanding the behaviour of materials during testing in order to integrate the trusses safely into the design. Simple shapes needed simple solutions in order to solve a design challenge. The trusses were used in conjunction with detailing to create the spaces that satisfied the regulations.

“The project embraced inclusive design and building performance for end users and the functional design solutions to create prototypes that were manufactured, assembled and tested. In particular, the laboratory testing of the timber lattice columns was conducted to determine the optimum shape of the lattice infills. An extremely innovative study embracing the spectrum of architectural technology with a particular emphasis on the importance of structural elements not only as the primary function but optimisation including use.”

This article was written by Kirsten Adjei-Attah, Coventry University. It was kindly provided by the Chartered Institute of Architectural Technologists (CIAT) and previously appeared in its AT Journal (Autumn 2019 Issue 131). It can be accessed HERE.

Other articles by CIAT on Designing Buildings Wiki can be accessed HERE.

Retrieved from "https://www.designingbuildings.co.uk/wiki/Compressive_strength_of_timber_lattice_columns_for_low-rise_construction"
Create an article