Like systems of measurement, there have been many different paper size standards at different times and in different places.

Today there is one widespread metric international ISO standard for paper sizes. Standard paper sizes like ISO A4 are widely used all over the world. The ISO standard paper sizes are used for writing paper, stationery, cards, and some printed documents. The standards also have related sizes for envelopes. In North America, a local standard is used that is still based on imperial measurements.

The international A-series of paper sizes is now universally accepted as the standard used for all drawings, printed sheets and written materials. The A-series and B-series formats were designated ISO 216 in 1975, and are based on the German DIN (German Institute for Standardisation) 476 standard for paper sizes, which uses an aspect ratio of 1:√2.

[edit] History and adoption of the A-series.

The advantages of basing a paper size on an aspect ratio of √2 was first noted in 1786 by the German scientist and philosopher Georg Christoph Lichtenberg. During the First World War (1917), while working as a meteorologist on the Western front, Dr Walter Porstmann (German mathematician and engineer) published a work on standards which turned Lichtenberg's idea into a proper system of different paper sizes. 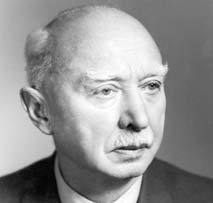 (Note: The acronym, 'DIN,' is often incorrectly described as Deutsche Industrienorm ("German Industry Standard"). This is largely due to the historic origin of the DIN as "NADI". Indeed, NADI published their standards as DI-Norm (Deutsche Industrienorm). For example, the first published standard was 'DI-Norm 1' (relating to tapered pins) in 1918. Many people still mistakenly associate DIN with the old DI-Norm naming convention.)

On 18th August 1922 Porstmann's system new DIN standard (DIN 476) was launched, with the A-series and B-series replacing a vast variety of other paper formats. Even today the paper sizes are called "DIN A4" in everyday use in Germany and Austria. The term Lichtenberg ratio has recently been proposed for this paper aspect ratio.

The Lichtenberg Ratio (1: 1.4142) is occasionally confused with the Golden Ratio, which is 1: 1.618. While aesthetically pleasing properties have been attributed to both, the Lichtenberg Ratio has the advantage of preserving the aspect ratio when cutting a page into two. The Golden Ratio, on the other hand, preserves the aspect ratio when cutting a maximal square from the paper, a property is not particularly useful for office applications. The Golden Ratio was a very fashionable topic in antique and renaissance arts literature and it has a close connection to the Fibonacci sequence in mathematics. Many examples of the Golden ratio can be found in art and architecture.

The DIN 476 standard spread quickly to other countries.

By 1975 so many countries were using the German system that it was established as an ISO standard (ISO 216) by the International Organisation for Standardisation, as well as the official document format for the United Nations.

In 1977, a large German car manufacturer performed a study of the paper formats found in their incoming international mail and concluded that out of 148 examined countries, 88 were already using the A series formats. Today the standard has been adopted by all countries in the world except the United States and Canada. In Mexico, Costa Rica, Colombia, Venezuela, Chile and the Philippines the US letter format is still in common use, despite their official adoption of the ISO standard.

[edit] Sizes in the A-series

The dimensions of this rectangle of paper (A0) is 1189 × 841 mm and by progressively halving the larger dimension, a reducing series of rectangles is produced, in which the proportions of the original rectangle remains relativity unchanged (at approximately 1:1.4142), and in which the area of each rectangle is half that of its predecessor in the series. 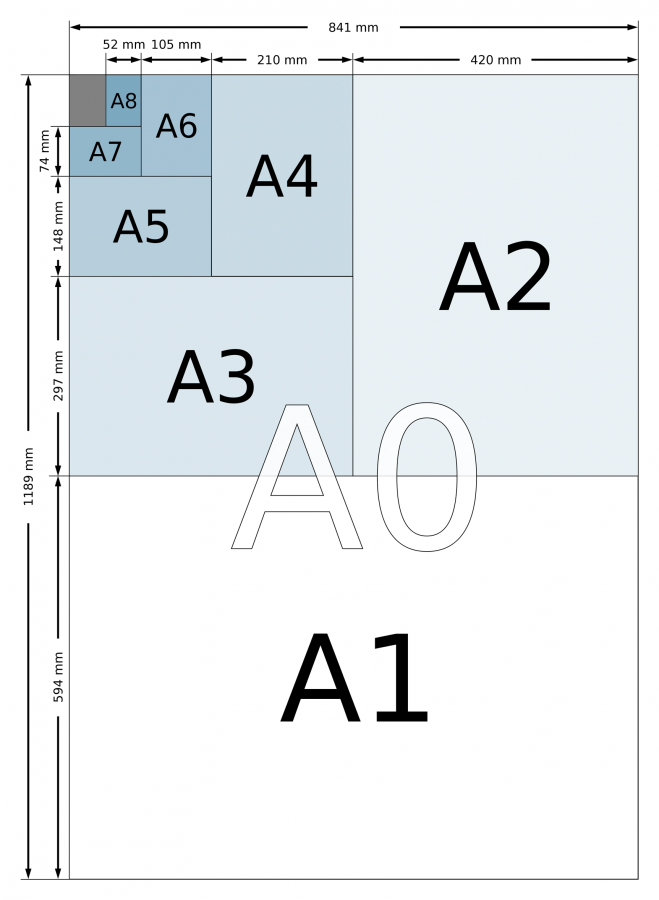 This system (as with the B-series and C-series) allows scaling without compromising the aspect ratio from one size to another – as provided by office photocopiers, e.g. enlarging A4 to A3 or reducing A3 to A4. Similarly, two sheets of A4 can be scaled down to fit exactly one A4 sheet without any cut-offs or margins.

The A formats are trimmed sizes and therefore exact; stubs of tear-off books, index tabs, etc. are always additional to the A dimensions. Printers purchase their paper in sizes allowing for the following tolerances of the trimmed sizes.

Recommended methods of folding the larger A-sized prints are shown below. 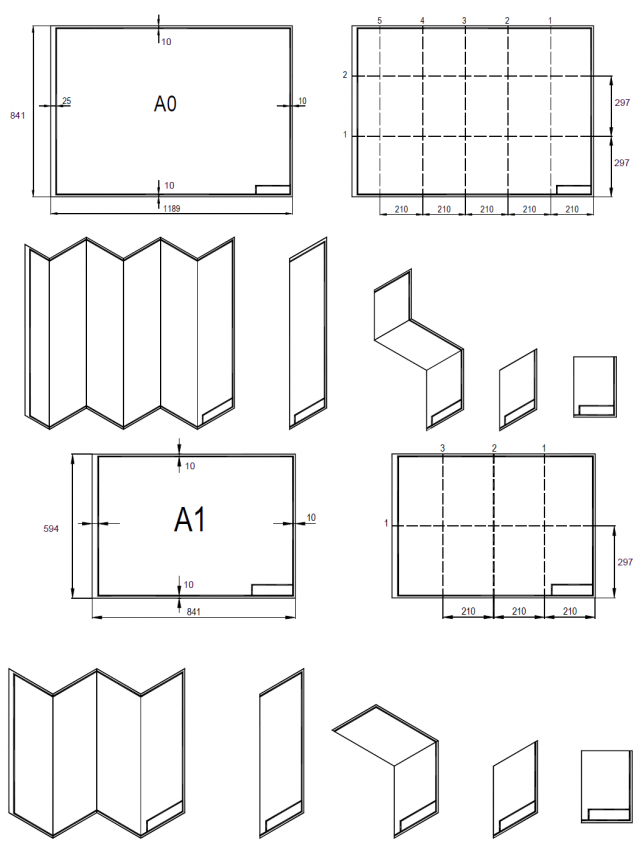 Weights for the A-series are easy to calculate. A standard A4 sheet made from 80 g/m2 paper will weigh 5 g (as it is one 16th of an A0 page, measuring 1 m2), allowing one to easily compute the weight—and associated postage rate—by counting the number of sheets used.

In the original German standard and specification of DIN 476 for the A and B sizes there are two other sizes that differ to their international successor:

DIN 476 provides an extension to formats larger than A0, denoted by a prefix factor. In particular, it lists the two formats 2A0, which is twice the area of A0, and 4A0, which is four times A0:

The less common B Series of paper sizes were introduced to cover desirable sheet proportions that were not included by the prominent A Series. As with the A series, the lengths of the B series have the ratio 1:√2. 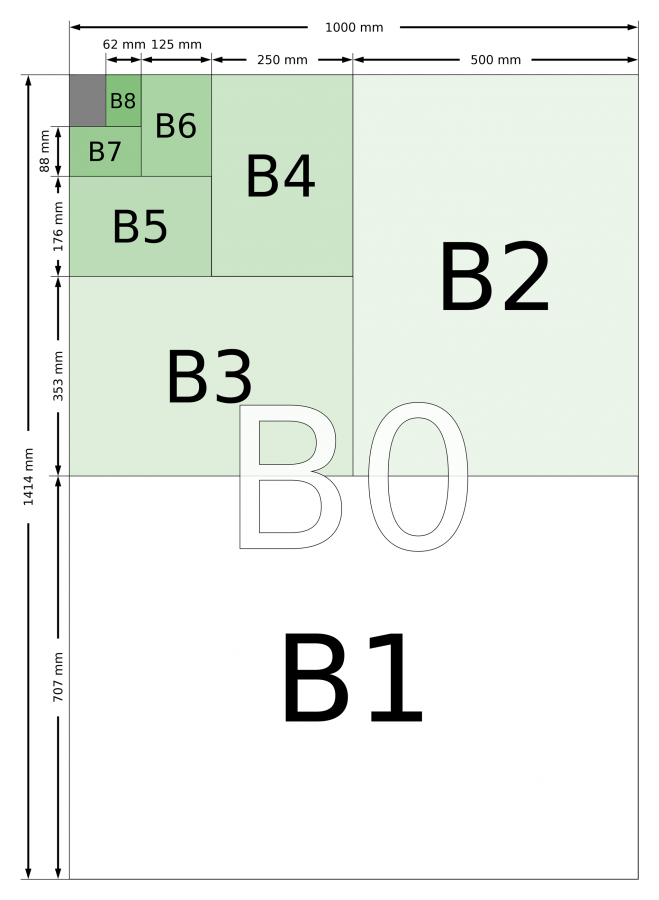 The area of B size sheets are the geometric mean of successive A-series sheets. For instance, the area of the B1 sheet (0.707 m²) is in between A0 (1 m²) and A1 (0.5 m²). The B Series is used for passports, envelopes and posters. B5 has become a conventional size for many books. 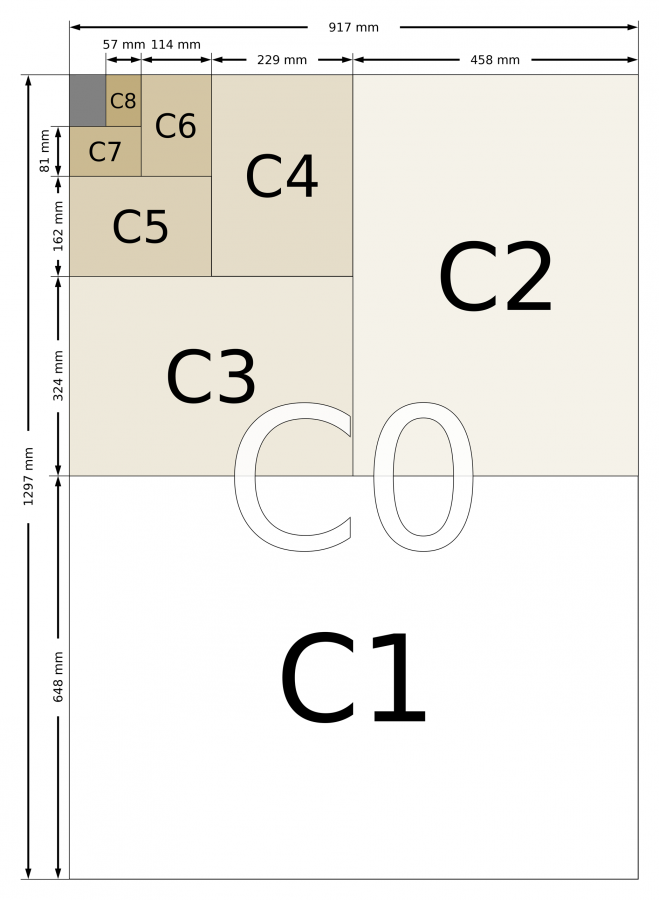 For instance, a C4 envelope can hold a flat A4 sheet; a C5 can house a flat A5 sheet and so on, and C4 paper fits inside a B4 envelope, as well. The DL (Dimension Lengthwise) envelope was created to hold a concertina folded sheet of A4, or a standard sized compliments slip. 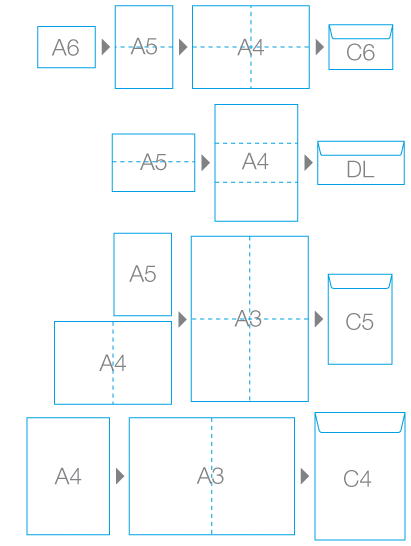 Computer Aided Design (CAD) uses these paper sizes too, with the addition on larger drawings of a gripping margin for the printer or plotter.

So after drawing with a 0.35 mm pen on A3 paper and reducing it to A4, you can continue with the 0.25 mm pen. (ISO 9175-1). Other sizes of pens are available, however, to keep the same factor when working between different size sheets, the standard sizes of pens (m ISO) should be used.

The large differential between A0 and A1 has led to the introduction in some offices of a non-standard size sheet (referred to by magazine publishing as a “bastard size”) to reduce the gap, but the use of non-standard intermediate sizes is not desirable. These non-standard sizes have to be cut from paper of a larger size, and their non-standard proportion lead to difficulties in folding, storage and photographic reproduction.

Using non-standard sheets should always be avoided, and if an intermediate sizes are needed between A0 and A1 then the B1 size should be used instead. A0 can be incredibly cumbersome at times, both in the drawing office and on site, and on the whole it would seem to be preferable to set the A1 sheets as the upper limit for working drawings in all but the most exceptional circumstances, e.g. presentations, displays, etc. The site plan for even the largest of projects can usually be illustrated at the appropriate scale on an A1 sheet.

Apart from this upper limitation it is clearly sensible to restrict as far as possible the number of different sized drawings on any one project. An early appraisal of the size of the job and of the appropriate scale for the general arrangement planes will probably establish the format for the complete set of such drawings; normally it is not difficult to contrive that the assemblies and the ranges of component drawings should also be drawn on sheets of that size. The majority of the drawings in the average set therefore will appear in either A1 or A2 format, depending upon the size of the project.

The nature of sub-component drawings and schedules however, tends to make a smaller format more suitable, and there will always be a number of small details which it would be pointless to draw in one corner of an A1 sheet and which it would be confusing to attempt to collect together on a single sheet. The ‘miscellaneous details’ approach should never be used as it will lead to confusion between designer and builder.

Where the format for the other drawings is A2 it is probably worth wasting a little paper for the sake of obtaining a manageable set of consistent size. Where the general size is A1 however, a smaller sheet become necessary and whether this should be A4 or A3 is a matter for some debate.

[edit] Pros and cons of using A4 over A3

The advantages of the A4 format are:

The disadvantages of the A4 format are:

The choice is not easy, but on the whole most people would favour A3 as the smallest sheet of a set, if only for the pragmatic reason that you can, at a pinch, hang them landscape in a vertifile; that you can bind them into a specification or a bill of quantities and fold them double; that you can copy them in two halves on a photocopier and tape the two halves together; and that wasting paper is, in the last resort, cheaper than redrawing a detail which in the end would not quite go on the sheet.

(Note: There is a separate article on North American paper sizes on this Wiki)

Old drawings will frequently be found in the sizes common prior to the changeover to metric. These sizes are given in the table below.

( * The sizes marked with an asterisk are still in use in the United States.)

Drawing boards are currently manufactured to fit A-size paper, while vertical and horizontal filing cabinets and chests have internal dimensions approximately corresponding to the board sizes listed in the table below. Boards, cabinets and chests designed for pre-metric paper sizes are still in use.

Retrieved from "https://www.designingbuildings.co.uk/wiki/Paper_Sizes"
Create an article