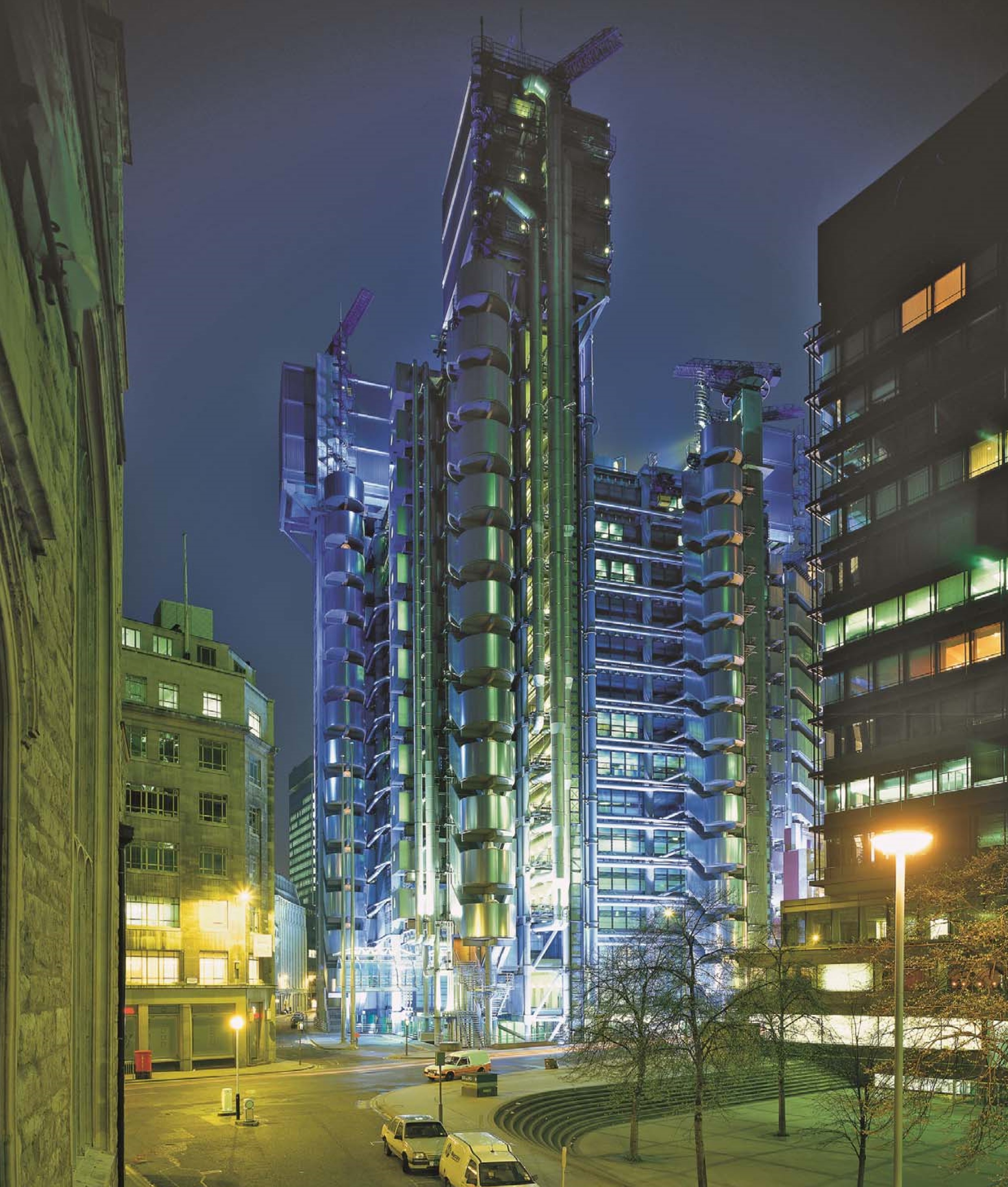 Lloyd’s of London, designed by Richard Rogers, is one of the most iconic buildings in London and a leading example of the ‘high-tech’ architectural style that combines both industrial and futuristic aesthetics. Historic England described it as being ‘universally recognised as one of the key buildings of the modern epoch.’

Situated at 1 Lime Street in the City of London, the Lloyd’s Building, home to insurance company Lloyd’s of London, was officially opened in 1986 after a construction period of 8 years. It cost approximately £75,000,000 to build.

Lloyd’s of London had occupied a nearby site on Leadenhall Street since 1928, moving to Lime Street in 1958 as a means of expanding with the market. Towards the end of the 1970s there was a need to expand further and so the decision was taken to purchase the current site.

At this time, Norman Foster and Richard Rogers were celebrated figures of British architecture, and had stated their intentions to re-energise the Modern Movement with what became known as ‘high tech’ due to its abundance of steel and glass. Public money was in short supply for the kind of flagship building projects they had in mind, so increasingly they looked to the private sector.

One of the pioneering examples of the high tech style was the Centre Pompidou in Paris, which had been designed by Richard Rogers and Renzo Piano. This building was unique in that the services, such as staircases, lifts, drainage and water pipes, were on external display as opposed to being concealed and taking up space inside the building.

When Lloyd’s commissioned Richard Rogers to design their new building, the brief was to create something that would be flexible and hence facilitate their changing needs. They also wanted a building that would provide for its needs well into the next century. It was also imperative that they could continue their operations unhindered during the rebuilding operation, which involved the demolition of the existing 1928 building. The competition for a new building was won on the basis not of an architectural proposal but of a strategy for the future of this key City institution.

Richard Rogers Partnership (RRP, now Rogers Stirk Harbour + Partners RSHP) proposed a building in which the dealing room could expand or contract according to the needs of the market, by means of a series of galleries around a central space. To maximise space, services were banished to the perimeter. As the architectural form of the building evolved, particular attention was paid to its impact on the surrounding area, especially the listed 19th century Leadenhall Market. As a result, Lloyd’s became a complex grouping of towers, almost Gothic in feeling – an effect enhanced by the height of the external plant-room towers.

The building consists of three towers, each with their own service tower, which surround a central 60-metre high atrium that houses the main Underwriting Room and is naturally lit by a barrel-vaulted glass roof that took its inspiration from Joseph Paxman’s Crystal Palace. The building features 12 glass lifts that were the first of their kind in the UK.

As with the Centre Pompidou, the services were located externally, freeing up the interior of the building so that it could remain flexible, each floor capable of being altered by the addition or removal of partitions. This style was dubbed ‘bowellism’, based on the idea that the greatest amount of free floor space should be maintained.

Criss-crossing the atrium are a series of escalators intended to create a sense of the circulation between the floors. The cranes were left on top of the building, much the same as for old cathedrals that were intended to be modified and built to an ever grander scale.

Whilst initially provoking controversy due to its striking contrast with the surrounding area, Lloyd’s is today seen as one of the great architectural achievements of the 1980s, one of the buildings which confirmed the Rogers' position in the front rank of international architects. In 2011, it became the youngest building ever to receive Grade I listed status.

It has emerged as one of the greatest modern British buildings, one which balances technical efficiency with architectural expressiveness to produce an effect that is highly-romantic and judged a very positive addition to the London skyline.

In July 2013, it was sold to the Chinese company Ping An Insurance for a reported £260 million.

It is normally closed to the public, but does open occasionally for tours, most commonly during the annual Open House London event. 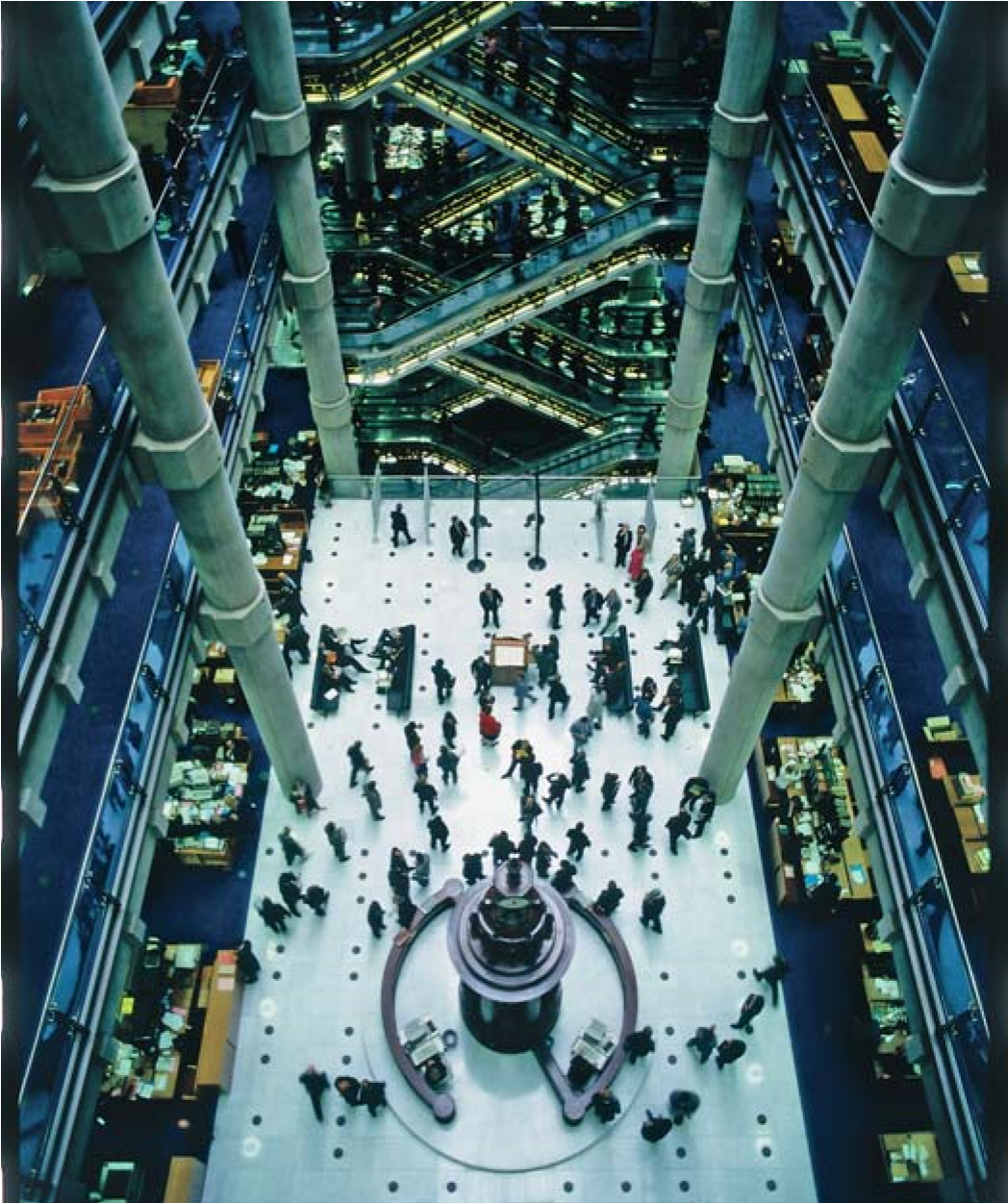 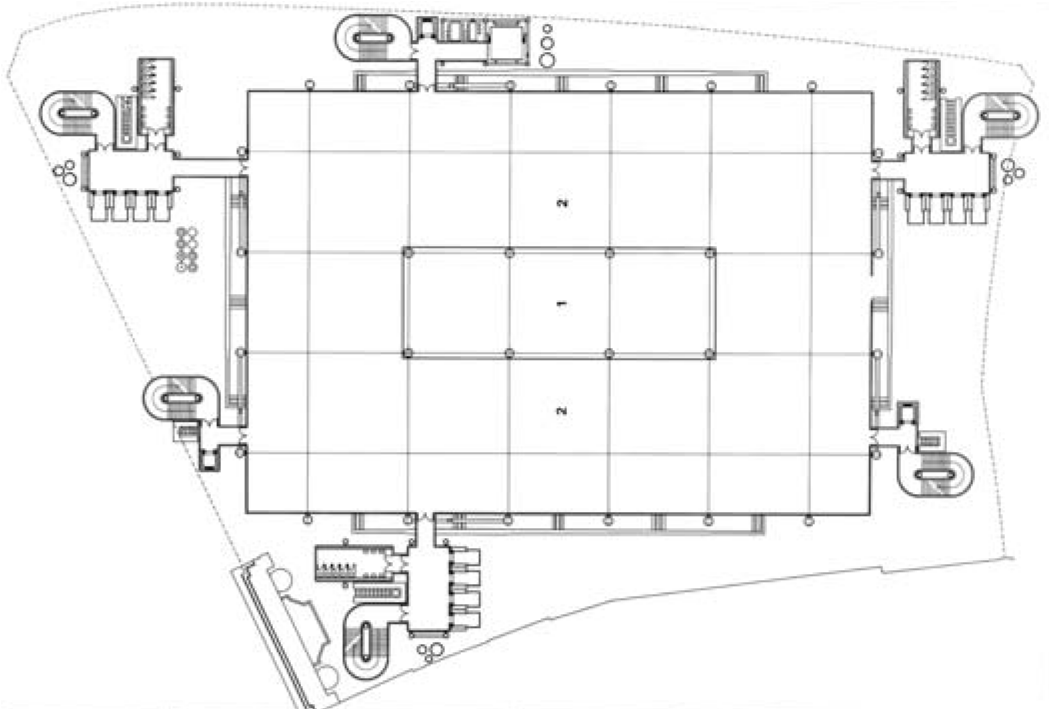 Retrieved from "https://www.designingbuildings.co.uk/wiki/Lloyd%27s_of_London"
Create an article