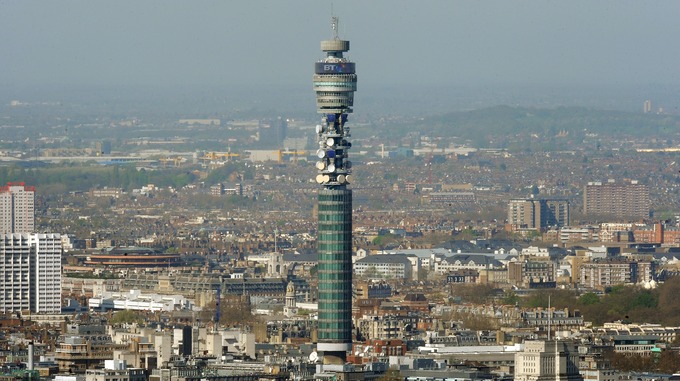 The BT Tower, formerly known as the Post Office Tower and British Telecom Tower, is a modernist communications tower located in Fitzrovia, London. At 177 m (581 ft), it was the tallest building in the UK when it was completed in 1964, a title it held until the construction of the NatWest Tower in 1980.

It was awarded Grade II listed status in 2003, and with its recognisable cylindrical design, it remains one of the most prominent and iconic landmarks of London.

Built in response to the need for modern telecommunications capabilities, the tower was commissioned by the General Post Office (GPO) and designed by the architects of the Ministry of Public Building and Works led by G.R. Yeats to be the first purpose-built tower to transmit high frequency radio waves. The height was necessary in order that signals could successfully pass over the Chiltern hills on the northern rim of the London basin.

The tower was also well-known for its revolving restaurant on the 34th floor, the only one of its kind in London, although this was closed in 1980.

Today, the tower serves as a functioning telecommunications centre, relaying broadcast, internet and telephone communications around the world. However, it remains closed to the public, with the exception of occasional charity or corporate events.

The tower was commissioned and to become an integral feature in the UK’s modern microwave telecommunications network at the height of the Cold War. Having considered the buildings that survived the Hiroshima and Nagasaki nuclear attacks, planners envisaged that the cylindrical design would be capable of withstanding a similar exchange. The shape also gave the tower good stability under wind loading important for the positioning of its communications aerials.

The tower, built by principal building contractors Peter Lind & Co., is made from 13,000-tonnes of concrete, steel and glass. The foundations are sunk through 53 m of clay, with a concrete raft 27 sq. m, reinforced with six layers of steel cable beneath a reinforced concrete pyramid.

The floors are split as follows:

Two high speed lifts travel vertically through the building at 6 m/s and distinguish the tower as being the only building in the country that Parliamentary legislation has ruled can be evacuated by lift in the event of emergency.

Work began in 1961 and was officially opened by the then-Prime Minister Harold Wilson in October 1965. It cost an estimated £2.5 million to build. 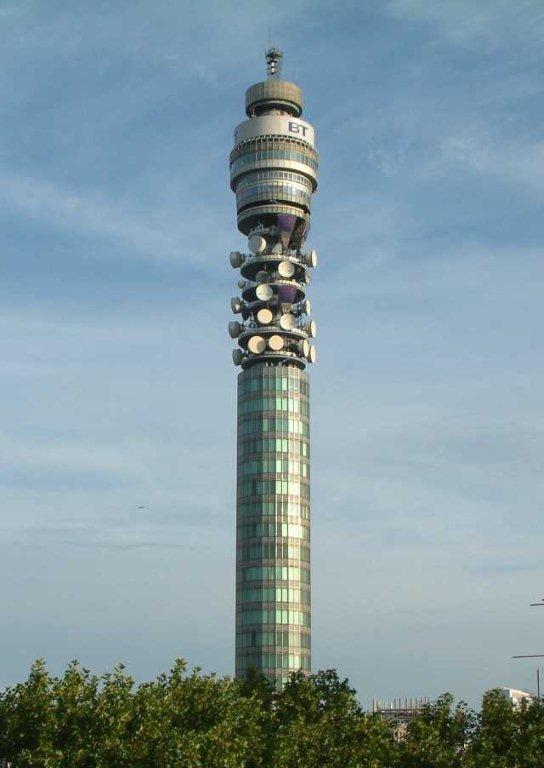 Throughout the 1960s, the ‘Top of the Tower’ restaurant was a major attraction, with 1.5 million visitors in its first year.

A bomb attributed to the Provisional IRA was exploded on the 31st floor in October 1971, which claimed no lives but resulted in two years-worth of repair work. BT took the decision that public access was too much of a risk and the restaurant was finally closed in 1980.

With then-Prime Minister Margaret Thatcher’s privatisation of the GPO in 1984, the tower was renamed the British Telecom Tower. In 1992, the company’s re-branding meant that it became known as the BT Tower.

Despite appearing in numerous TV, literary and film works, the tower was technically considered a ‘secret’ and was not included on any official maps. In 1993, its existence was ‘confirmed’ in Parliament.

In 2009, BT announced that the restaurant would be reopening, although these plans were abandoned shortly after.

Retrieved from "https://www.designingbuildings.co.uk/wiki/BT_Tower"
Create an article