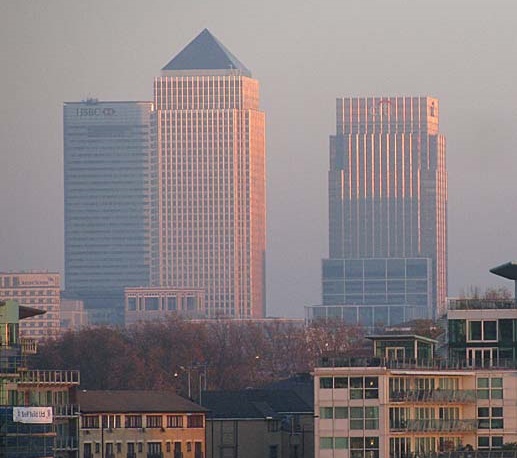 One Canada Square, commonly referred to as Canary Wharf Tower, is a skyscraper located in the London’s Docklands area known as Canary Wharf. With a height of 235 m (770 ft), it is currently (2018) the second tallest building in the United Kingdom. It is predominantly used for offices, although there are a number of retail units on the lower ground floor.

Designed by Cesar Pelli, Adamson Associates and Frederick Gibberd Coombes in the postmodern style, the building takes the form of an obelisk; a tower that is square in plan and topped with a pyramid.

Construction began in 1988, and upon completion in 1991 it was the tallest building in Europe and remained the UK’s tallest building for 20 years, helping to transform the previously derelict Isle of Dogs into a successful financial district.

The developers originally intended to clad the 50-storey tower in stone, but this was later changed to low density aluminium, before settling on stainless steel with a linen finish. It was the first skyscraper to have been constructed with stainless steel. In total, approximately 27,500 tonnes of British steel were used.

The core of the building includes a tuned mass damper – a steel pendulum – that sways to offset movements caused by strong winds.

The stainless steel pyramidal roof, measuring 30 sq. m at its base, encloses maintenance plant and other facilities for water supply, as well as a warning beacon for aircraft travelling to and from the nearby London City Airport.

The building is regularly used on TV and for films, making it one of the most recognisable buildings in the UK.

Retrieved from "https://www.designingbuildings.co.uk/wiki/One_Canada_Square"
Create an article