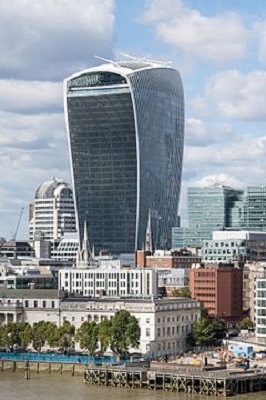 20 Fenchurch Street is a 160 m (525 ft) tall commercial skyscraper in the City of London, designed by Rafael Vinoly. It was nicknamed 'the Walkie-Talkie' because of its distinctive shape, designed to maximise floor space at the higher levels.

The 37-storey tower was constructed on a site outside the designated 'cluster' of City of London high-rises. The City's chief planner gave permissions based on the inclusion of a 'Babylonian sky garden' which would provide a new public piazza for visitors to view the Square Mile.

It gained notoriety for producing powerful downdraughts and hit the headlines during the summer of 2013, when its south-facing concave facade focused sunlight down onto the streets below, where it damaged parked vehicles. A permanent non-reflective awning had to be installed to cover the glass.

Not only was the exterior derided, but the public 'Sky garden' on the top levels was described as having been “designed with all the finesse of a departure lounge”. It was the unanimous winner of the 2015 Carbuncle Cup, with one voter claiming their new life goal was to see the building demolished.

In July 2017, the building was sold to a Hong Kong manufacturing company Lee Kum Kee for £1.3billion - a record price for a single building in the UK. This represents a profit of 167% on the development cost.

Retrieved from "https://www.designingbuildings.co.uk/wiki/20_Fenchurch_Street"
Create an article