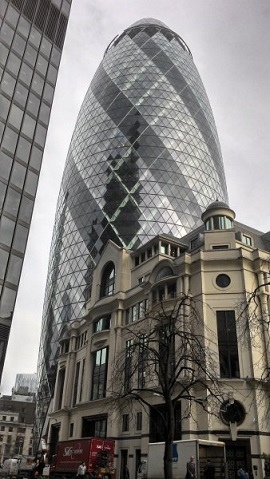 30 St. Mary Axe, widely known as ‘The Gherkin’, is a commercial office building in the heart of the City of London. Since its completion in December 2003, it has become one of the UK’s most distinctive buildings and a symbol of 21st century London.

The building was designed by the architect Norman Foster and Arup Group and was constructed by Skanska.

In 1992, the Provisional IRA exploded a bomb close to the Baltic Exchange which previously stood on the site. The bomb caused substantial damage to the building façade, and despite the intentions of conservation groups such as English Heritage (now Heritage England), the decision was taken to dismantle the building to make way for a new development.

In 1996, Trafalgar House submitted their plans for a Millennium Tower skyscraper, which was abandoned due to concerns about the proposed height of 386 metres being out-of-scale with the City of London at the time.

The design has a circular plan, that widens in profile as it rises and then tapers towards the top, giving it the distinctive ‘gherkin’ shape. However, despite the building’s curved glass shape, the only piece of curved glass is the cap at the very top.

The shape of the building reduces the need for reinforcement to stiffen the structure and resist wind loads. Diagonal braces at the perimeter mean the floor space inside the building is free from columns.

Norman Foster’s design was inspired by ideas developed in the 1970s by Buckminster Fuller for a Climatroffice, a concept for a building to have a free-form glass skin in which a microclimate could be sustained.

The building was completed in December 2003 and opened on 28 April 2004, winning that year’s RIBA Stirling Prize in an unprecedented unanimous decision.

The building went on sale in September 2006 for £600 million. In 2007, IVG Immobilien AG and UK investment firm Evans Randall purchased the building for £630 million.

With several commercial tenants, the building is only intermittently opened to the public. The top level dome (40th floor) houses a bar for tenants and their guests, and there is a restaurant on the 39th floor and private dining rooms on the 38th.