Clarity of architectural language is the key to this development, where the function of all constituent elements is celebrated, revealing the secrets of their manufacture and operation.

Lloyd’s Register is an old-established City institution, its Fenchurch Street headquarters the centre of a worldwide operation. The growth of the business during the 1980s led Lloyd’s Register to commission Richard Rogers Partnership (RRP, now Rogers Stirk Harbour + Partners, RSH+P) to prepare proposals for redeveloping its City site. Set within a conservation area, access to the headquarters is through a landscaped churchyard. The site is surrounded by existing buildings, including 71 Fenchurch Street constructed for Lloyd’s Register in 1901.

This Grade II listed building has been incorporated into the new headquarters and extensively restored. The new building comprises fourteen stories of office space and two basements. The floorplates taper in response to the awkward geometry of the site, creating a fan-shaped grid composed of vaults formed around two atria spaces.

This design allows daylight penetration and provides thermal buffers between the offices and the exterior. The building steps up from six to fourteen levels within the centre of the site. Service cores are expressed as towers – two primary circulation cores face the churchyard, while secondary cores to the rear house toilets, goods lifts, staircases, and the main services risers. Highly transparent glazing offers instant legibility – people using the fully glazed wall-climber lifts and stairs animate the building’s exterior.

The glazed façade is designed to maximise daylight while limiting solar heat gain in summer and heat losses in winter. In addition to double glazing, the east and west facades feature panels of motorised louvres. Activated by photo-cells mounted at roof level, when the louvres are angled at 45 degrees the facade system reduces solar heat gain by 90 per cent. Chilled beams incorporating sprinklers, lighting and a PA system cool the air in the office space. The building’s energy efficiency means a reduction of carbon-dioxide emissions by 33 per cent and costs by 40 per cent when compared with a conventionally air conditioned building. 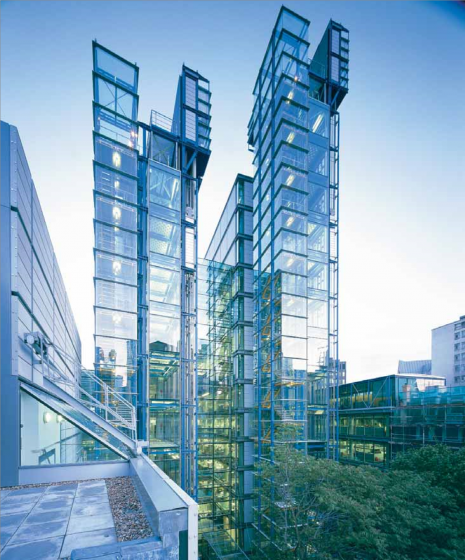 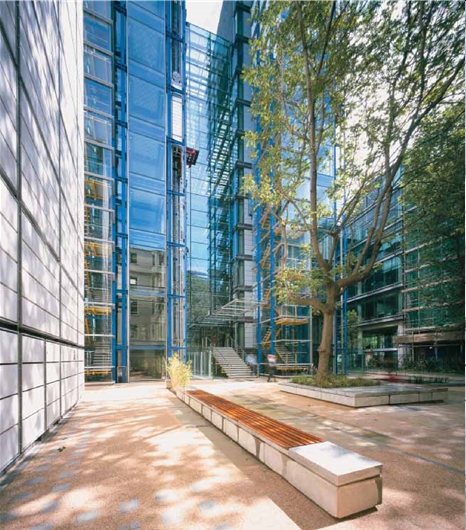 Retrieved from "https://www.designingbuildings.co.uk/wiki/Lloyd%27s_Register"
Create an article