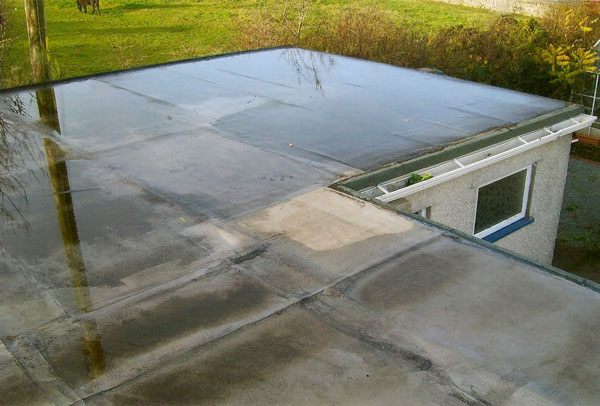 Flat roofs were widely adopted in the UK after the Second World War. They were seen as a cheaper alternative to traditional pitched roofs, but whilst their capital cost can be lower, they can be prone to defects.

Whilst they are described as ‘flat’ almost all flat roofs are actually laid to a fall to ensure that rainwater can run off to the lower side. Typically they are designed to have a minimum fall of 1:40, which given on-site inaccuracies should result in a minimum fall of at least 1:80 in the finished construction.

The majority of flat roof problems relate to moisture, either from rainwater or condensation. In nearly every case of flat roof failure, the effect will be seen on the ceiling under the roof, but this does not mean that the fault is directly above the leak. By their very nature, flat roofs encourage water to spread across their surface seeking a weak point.

Common causes of failure include:

A concrete slab flat roof is normally made up of a structural layer finished with a smooth screed onto which a water proof layer such as a membrane is laid. The roof should incorporate insulation and usually a vapour control layer to protect from interstitial condensation.

It should also be remembered that there is a lot of water present in the concrete-making process. If insufficient drying time is allowed then any residual moisture may cause problems. Leaks can also occur in cold weather as a result of condensation, or due to rainwater penetration.

Timber flat roof construction usually consists of structural joists topped with a decking of plywood or a similar sheet material. As with concrete flat roofs, a timber construction will be finished with a waterproof covering such as a membrane, or a sheet material such as lead. Insulation will be incorporated within the roof build up, together with a vapour control layer to protect from interstitial condensation.

Timber boards can shrink and warp causing damage to the waterproof layer above.

Water penetration and condensation problems are similar those found in to concrete roofs, although construction water will not be an issue as generally no wet trades are involved.

However, shrinkage problems can occur as the building itself dries out, and timber can absorb moisture and then deteriorate. Even treated timbers and decking can deteriorate if subject to moisture, which can cause rot and encourage mould growth. Any remedial work must address the issue of timber rot, either of the roof decking or of the structural timbers. Given the extent of the problem, timbers may have to be replaced, and remaining timbers treated, and the waterproof covering repaired.

If insulation has become wet, this may need to be replaced.

These roof coverings are generally designed to be laid flat and are prone to weakness where they are bent; for example, at skirtings, parapets and verges, and at joints or seams.

Cracking of asphalt can be surface cracking or it can penetrate through the whole surface and expose the supporting layers. Surface cracking may be caused by shrinkage of the asphalt. If the cracks penetrate the surface it suggests movement or even failure of the structural elements of the roof.

If properly laid, roofing felt should last for 20 years, but being a bituminous-based product it will suffer from long term exposure to sunlight. Ponding of water on the surface can also encourage a breakdown of the material especially at the edge of any pond.

Problems can occur if felt layers are not properly laid and bonded. Joints can negate the fall of the roof and encourage ponding. If water penetrates defective joints then adhesion between layers can deteriorate.

Problems can occur which are caused by the decking below the felt. Boards may have moved or warped, or interstitial condensation may build up between the gaps in the boards.

Defects are often caused by poor detailing at junctions, poor workmanship, and interstitial condensation. Lead is subjected to a wide temperature range and expands and contracts with changes in the weather, such as exposure to solar radiation. This can cause buckling and eventually cracking.

Problems can occur if lead is laid in sheets that are too big, or if the wrong thickness (code) of lead is used, or if junctions are not properly designed to cope with expansion. Where lead is welded, this may also cause failures.

While lead can withstand years of exposure to rainwater, condensation is distilled water which dissolves lead. This problem occurs in particular where lead has been laid over a ‘warm roof’ and forms on the underside of the sheet lead.

Zinc is a cheaper alternative to lead, and is both lighter and thinner but not as durable.

It is susceptible to deterioration where it has been bent, but is more stable when subject to temperature change. Zinc becomes brittle with age, especially when exposed to a polluted atmosphere. This can make joints and seams susceptible to damage.

Copper is often selected as a roof covering for its appearance rather than for its longevity. It is susceptible to acid attack, such as acidic discharge from flues, bird droppings, etc.

We have also written extensively on the methods to survey flat roofs.