An inverted roof, also referred to as a ‘protected membrane’ or ‘upside down’ roof, is where the waterproofing layer is beneath the thermal insulation layer instead of above it. This means that the temperature within the roof void is closer to that of the building’s interior, without a vapour control layer being required as with a warm roof.

BRE investigated a large building with an inverted roof that was suffering from persistent leaks, with water dripping from the underside of the roof and on to suspended ceiling tiles. When the insulation was removed from the worst-affected area, a large number of water-filled ‘blisters’ were found in the waterproof membrane.

The blisters ranged in size from 50 mm to 1 m and further investigations revealed that they were present across the entire building. 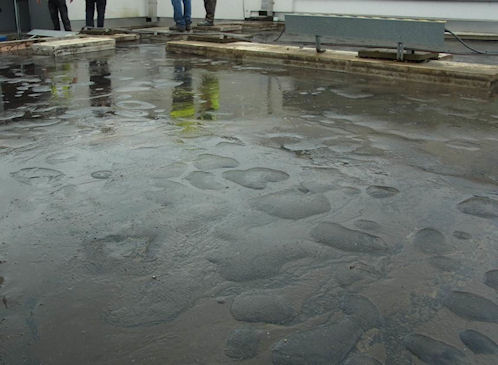 The building owners assumed that the blisters had formed because of pinholes and small tears in the membrane, and indeed many such defects were present. However, the majority of the blisters did not contain any defects and there appeared to be no path for water to enter them.

Following an investigation, BRE concluded that water that had been trapped in the roof build-up during construction had condensed between the top of the concrete screed and the underside of the membrane.

The epoxy primer that had been applied to the top of the concrete screed appeared to be acting like a one-way valve, allowing water vapour to pass upwards, but not allowing it to be absorbed back into the screed once it had condensed. This caused the blisters to be ‘pumped up’ with water each time a sudden downpour followed a spell of fine weather. 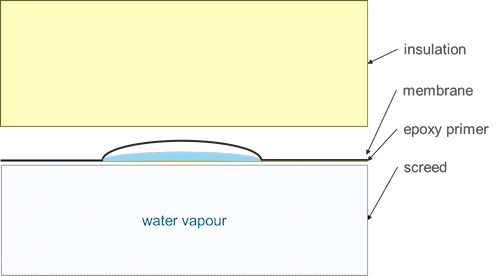 [Figure 2 – Sketch of condensation within a vapour-filled blister]

It is stressed that this was an unusual occurrence and not one that is normally associated with inverted roofs. Unfortunately the scope of the investigation did not allow BRE to fully investigate the circumstances that had allowed the blisters to form. But the most likely cause was a deficiency in the bond between the liquid-applied waterproof membrane and the primed surface of the concrete screed.

This article was originally published here by BRE.

Retrieved from "https://www.designingbuildings.co.uk/wiki/Inverted_roof_defect_-_case_study"
Create an article