Although we can increase energy supply from wind and solar power, the policy makers cannot command the sun to shine or the wind to blow when we need the energy and the result of this is that by relying solely on the elements we are likely to have a mismatch on the supply and demand profile. The growth in the renewable generated share of the energy mix suggests we could experience more unpredictable and intermittent power generation. This has the potential to create instability in the grid, affecting the power quality, peak demand not being met and anything in excess being dumped.

The issue of matching generation to the demand curve isn’t a problem unique to the use of condition critical renewable technologies, it is also relevant to generation through existing power stations. The peak period for demand is between 4pm and 8pm as people arrive home from work and prepare their evening meal, the first 2 hours of that period are the most critical as they overlap with the end of the working day.

Demand response with smart meters and electric vehicles can help to shift the load. However, it will involve a change in consumer behaviour. Such changes need a stimulus; this could result from the installation of smart meters, however, the deployment of smart meters in Europe and the US, and in particular in the UK, is behind the original schedule.

Storing up the excess energy from peak generation periods for later use would appear to be the most straight forward answer to this problem and is referenced in the UK Government’s Electricity Market Reform paper as a part solution, however there are many different kinds of energy storage technologies. 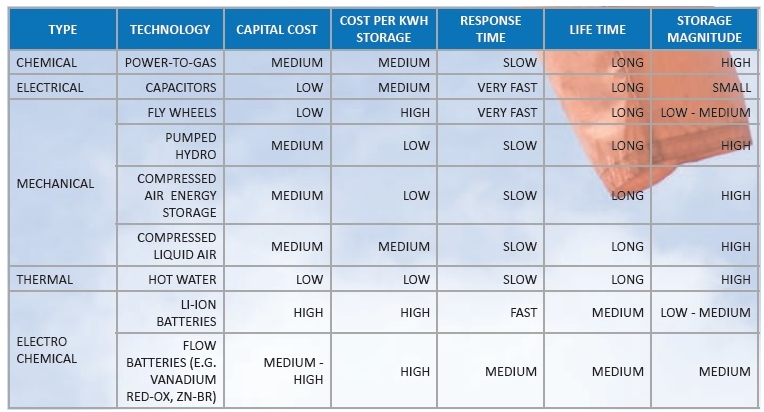 Image: Comparison of cost and performance of energy storage technologies.

Choosing between technologies will depend on storage capacity and power discharge time (response time) from a performance perspective. From the investor’s perspective, it will probably be determined by the cost of storage and the return on investment (ROI). For grid scale energy storage, pumped hydro is so far the most common in bulk storage in both the US and Europe. For other newer technologies such as batteries, we still lack a positive business case to support the investment. This is not just because of the initial high cost of new technologies, the current market framework cannot give a true value of energy and storage. This leads to a lack of interest from investors.

The European Commission (EC) recognises that energy storage is needed for a larger uptake of renewables and a super grid cannot go without energy storage. What we need from the EC are standards and regulation, and the most important thing – a feasible business model for the energy industry.

The world’s largest Li-ion batteries with 32 MW storage capacities were installed next to an onshore wind farm in West Virginia, United States to provide fast-response frequency regulation of the grid.

A 6 MW Li-ion battery will be installed in eastern England. This project received £20 million from Ofgem’s Low Carbon Network Fund. Once it is complete, it will become the largest battery storage system in Europe.

In the UK, we are also looking at the potential of using liquefied air as the storage medium. A 350 kW pilot plant hosted by Scottish and Southern Energy (SSE) has been in operation since April 2010. The working principal of this storage method is to compress and cool down the air to liquid form for storage. The merits of this method are:

Another storage technology which will also have high potential is Power-to-gas (P2G). P2G converts excess renewable generation into renewable power, fuel or heat via an electrolysis process. Electrolysis produces hydrogen or synthetic natural gas which can be directly injected into the gas pipeline, distributed on site as fuel, or further processed to produce methane and heat. This storage method is suitable for countries like Germany and the UK which have extensive use of gas in both industry and homes.

[edit] Could the future be the past?

Sometimes we may be too focused on new technologies and overlook conventional ones. We have already been using thermal storage for a number of years. Night storage heaters are a simple and cost effective way to store energy. A study conducted by Glen Dimplex and SSE to assess the potential for smart electric storage system (SETS) showed that by applying advanced electronic command and control capabilities, SETS can have a 20% efficiency gain compared to the current night storage heater.

SETS has the potential to provide 55GW controllable demand if all night storage heaters in the EU- 27 are replaced, compared to the current storage capacity of 51GW.

Scientists and engineers are working very hard on various storage technologies. What seems to be missing is a clear direction from policy makers to establish the right framework which allows investors to see the true ROI. Then we can get closer to our aspiration of a low carbon network, with confidence in the security of supply.

Retrieved from "https://www.designingbuildings.co.uk/wiki/Energy_storage_for_buildings"
Create an article