Best gym architecture in the world

Designing Buildings Wiki have highlighted some of the best examples of gym and fitness centre architecture in the world.

Have we missed a great example? Let us know in the comments section at the bottom of the page. 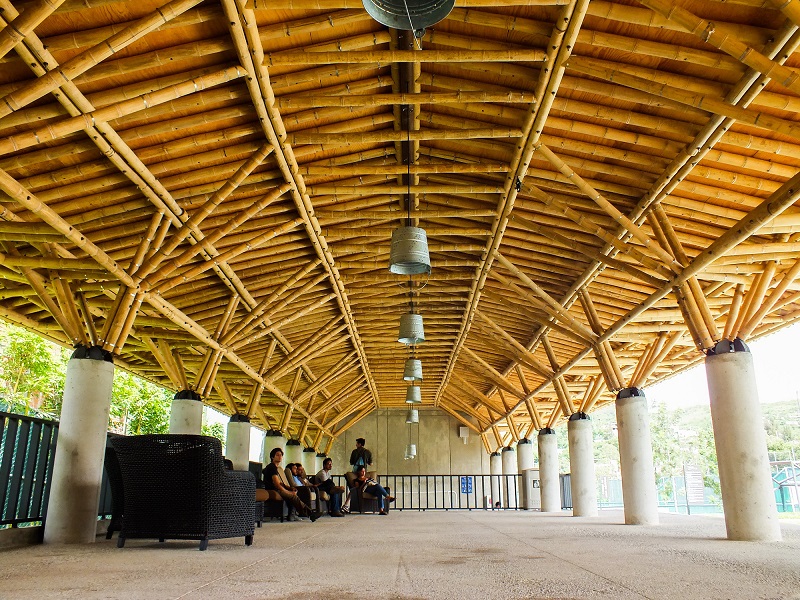 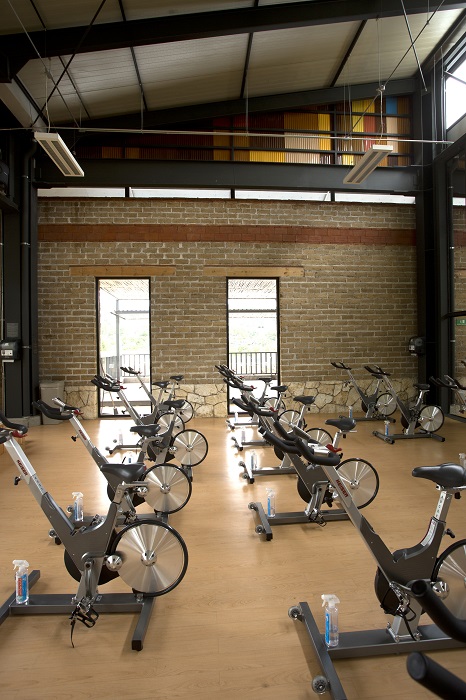 A towering bamboo roof was built between two buildings, covering a central courtyard. The roof was erected on concrete pillars fixed to the bamboo by metal connectors covered with plywood, cardboard asphalt and handmade yellow tiles.

The building uses passive design strategies such as natural ventilation through a horizontal opening that stretches along the top of the adobe walls, and is equipped with systems for capturing rainwater and energy. 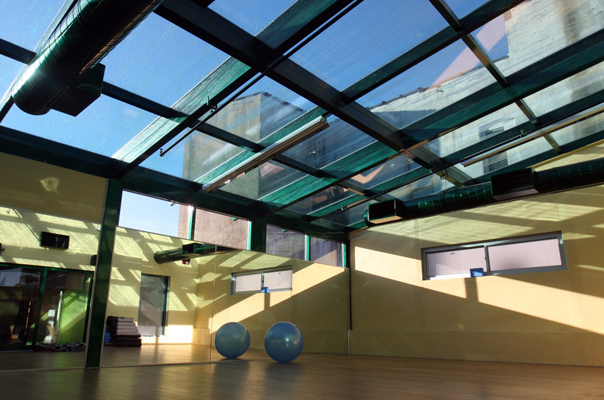 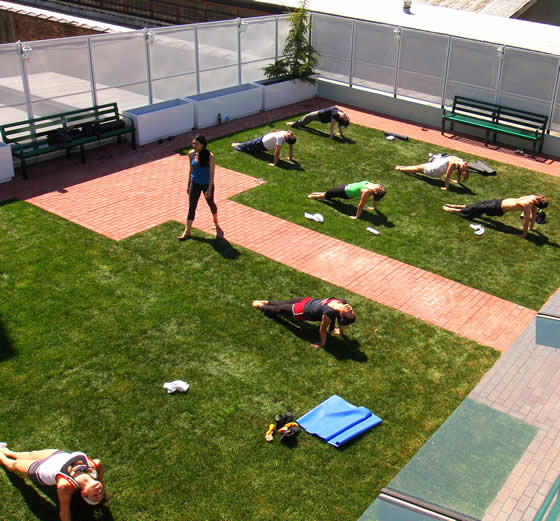 Promoted as the first eco-friendly fitness centre, the gym is fitted with bamboo floors, while the workout area has flooring made from recycled rubber.

The outdoor rooftop area is a 2,000 sq. ft space covered with turf, making it a 'living roof'. This helps cool the gym and encourages pollution to settle. It also reduces storm water run-off. 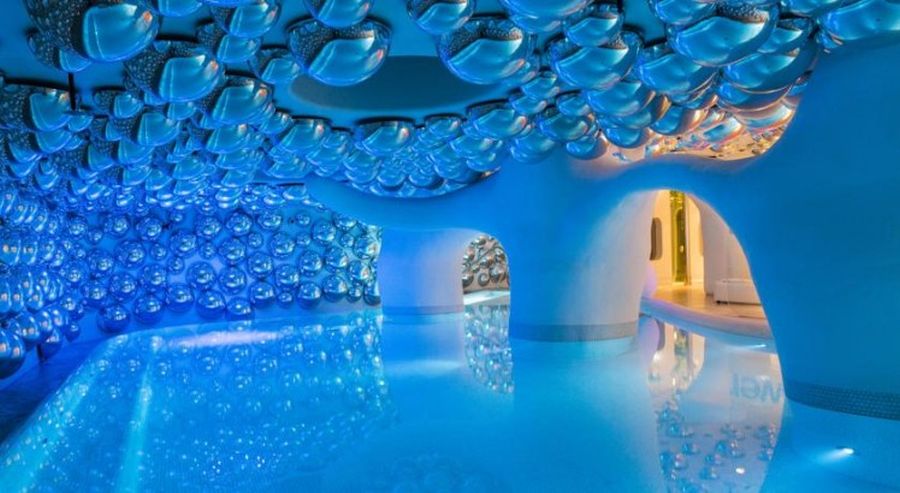 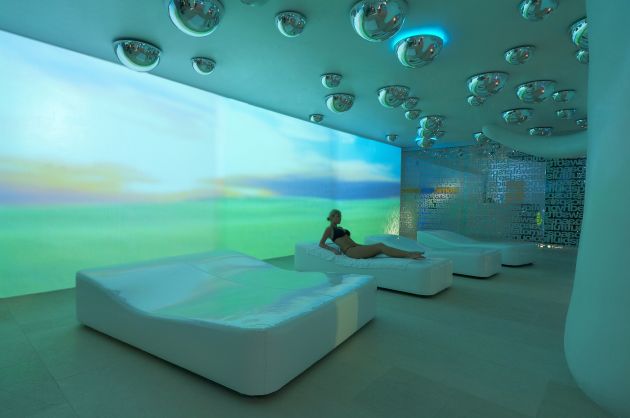 Tree-like structures made of expanded polypropylene appear to support the cave-like ceiling above the pool. Surfaces are studded with hundreds of 'mirror bubbles' coated with macroscopic plastic chromium, that reflects the blue tones of the pool.

Designed to create a sense of harmony, a 15m screen covers one entire wall and provides a relaxing mix of images and sounds. 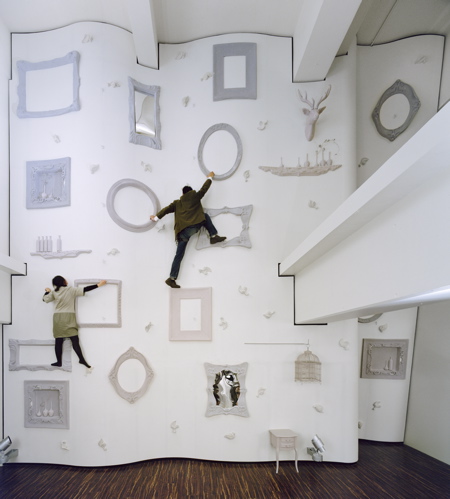 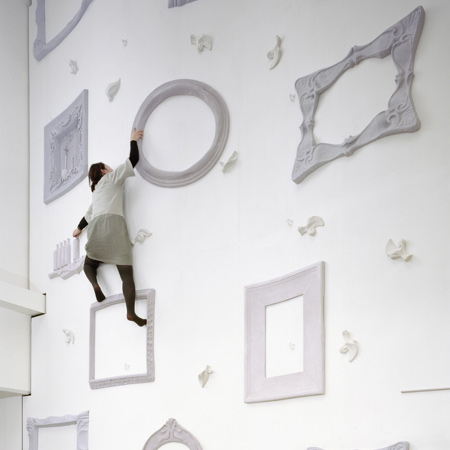 Nendo, the designers of this rock climbing wall in Tokyo's fashion district, decided to break with convention and use interior decorating items like mirrors, bird cages, picture frames, flower vases, and animal heads, as footholds and handholds.

The idea was to combine a rugged outdoor activity with the sophistication and elegance of the fashion district, to inspire newcomers to give the sport a try. 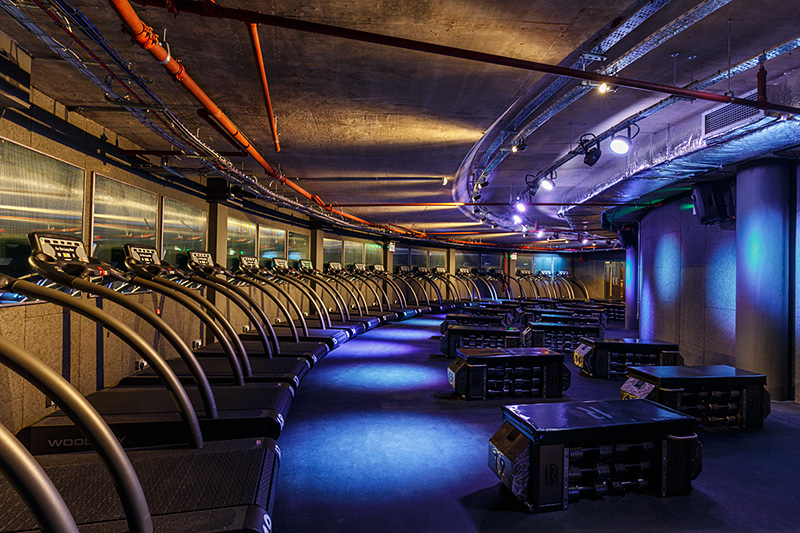 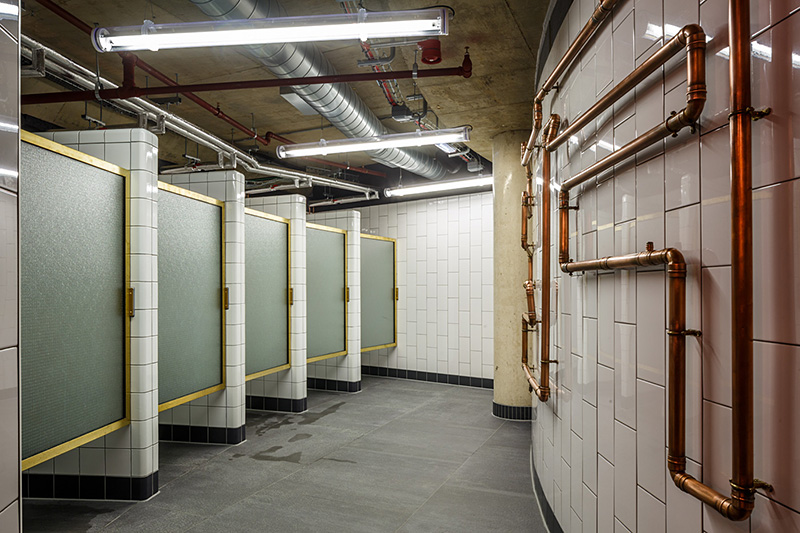 Part of the extensive redevelopment of London's Broadgate, the design firm Studio C102 oversaw the transformation of the existing plant room and storage space into a contemporary gym with a unique industrial aesthetic.

The interiors of the 750 sq.m gym are 'artfully disheveled', with unevenly textured floors achieved by pouring concrete on different days. The ethos behind the design was to use modest materials in novel ways. The sleek and stylised design includes decoratively arranged pipework, open ceilings, and lockers arranged like Tetris blocks. The lockers are faced in unsealed copper sheets that will naturally age and gain a unique patina 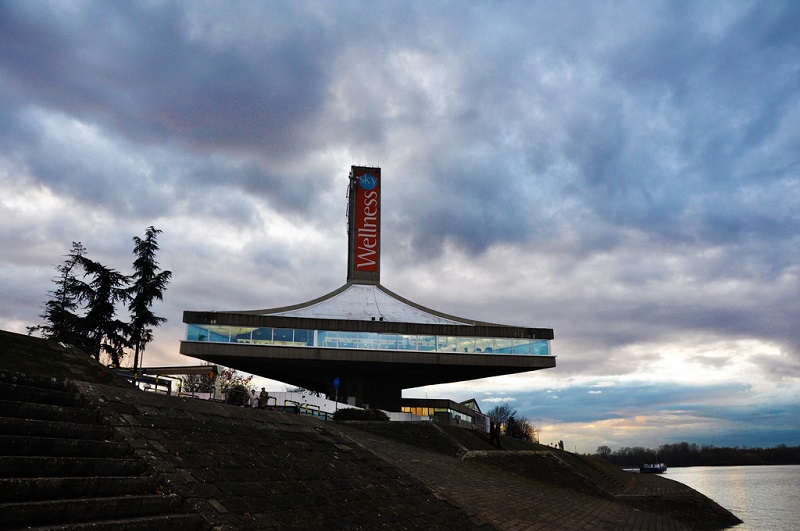 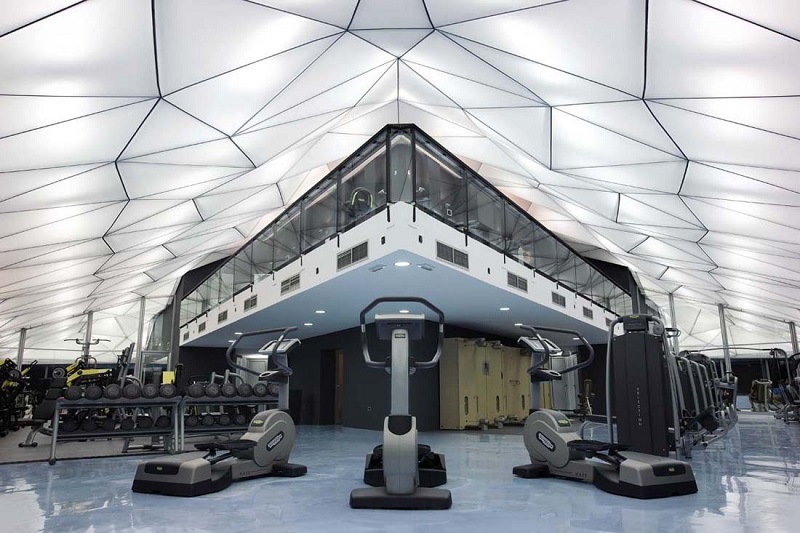 Nicknamed the 'Danube flower', this building was built in 1973 under the approval of the then-President Tito. It was a favourite haunt of celebrities until it fell into decline in the 1990s. Only recently has it been redeveloped and relaunched as a high-performance fitness centre.

The redesign is based on a sequence of sub-division and geometric transformations applied to the original grid. The main volume of the building, which is triangular in plan, is supported only in the centre. The overhangs, approximately 12 m in length, give the building a sense of hovering above the ground.

390 triangular backlit panels are suspended from the original roof, while a continuous glass facade separates the concrete floor from the ceiling. 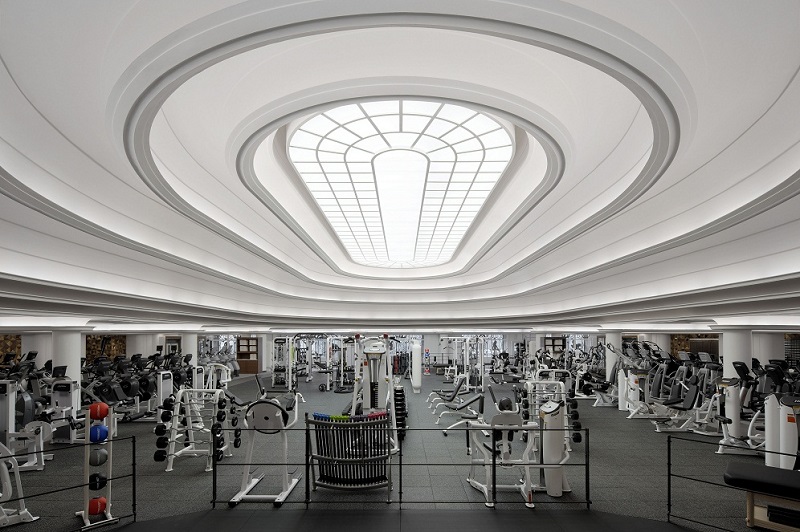 Equinox's flagship London gym is housed in the historic Art Deco Derry & Toms building at the foot of the Royal Parks, and has been a cultural fixture and luxury haven for residents of West London since opening in 2012. It was converted from the Rainbow Room restaurant, the famous 1970's hangout of Mick Jagger, David Bowie and Marianne Faithfull.

The central architectural feature of this visually-stunning space is an illuminated elliptical dome with glazed panels in the central section. 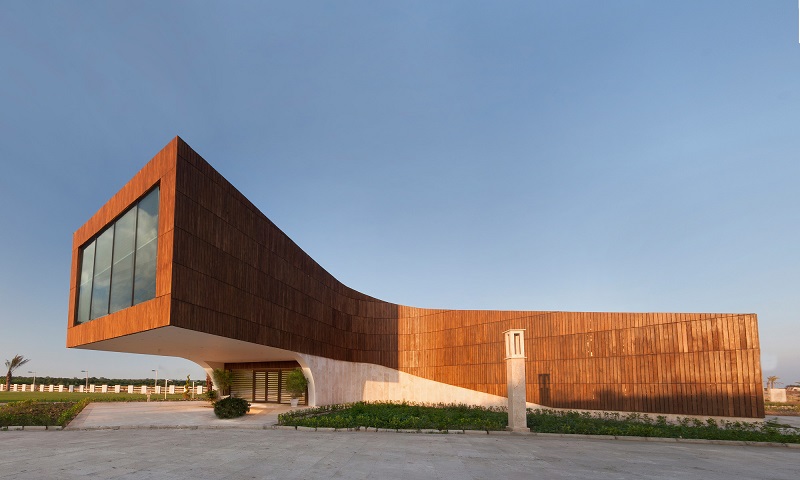 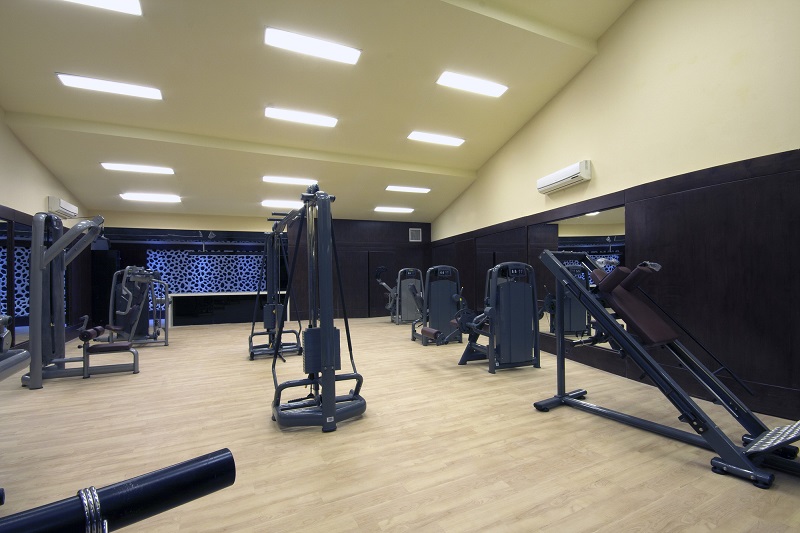 The concept behind this design was to create a dynamic mass that is an integral part of the surrounding landscape.

The structural mass rises from the ground and points upward towards the sky. Above the arched entrance, a 9m cantilever extends out and away from the building's curving mass. The building uses timber for the facade, and makes use of natural light with a full-length window that frames the sky. 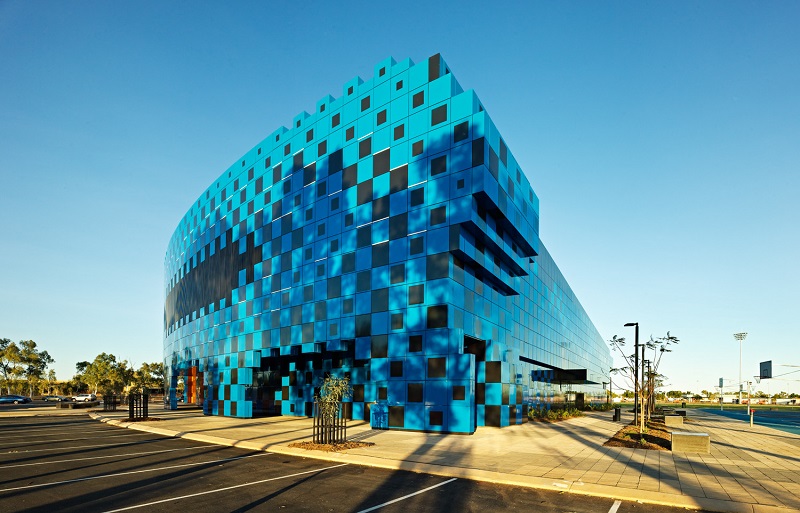 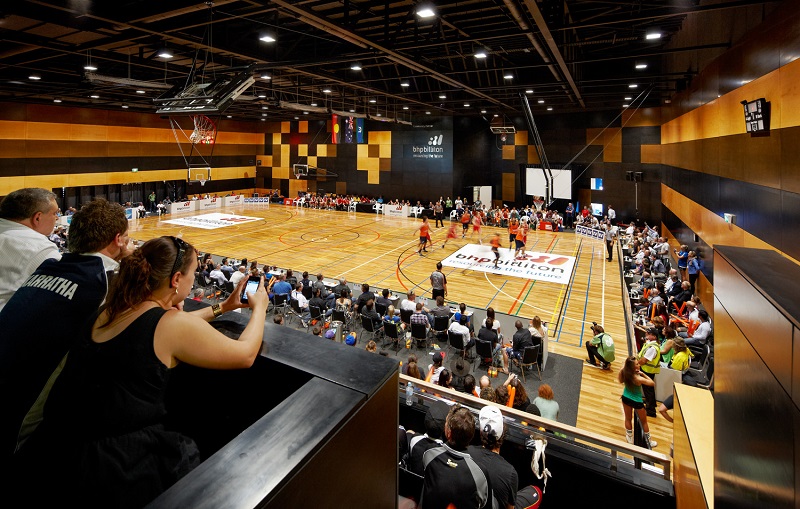 The design for this fitness centre was described by its architect Sophie Cleland as a 'cyclonic pattern ... creating a shimmering, rippling effect on an otherwise flat landscape.'

Using a 'half-tone' pixelated technique, the building represents a mirage. The entrance creates a clear visual image from a distances but appears highly-agitated on closer inspection.

Retrieved from "https://www.designingbuildings.co.uk/wiki/Best_gym_architecture_in_the_world"
Create an article