This article originally appeared in The Institute of Historic Building Conservation’s Context 144. It was written by Aimée Felton, an associate at Donald Insall Associates Architects and was published in May 2016.

You can see the original article on the IHBC website. 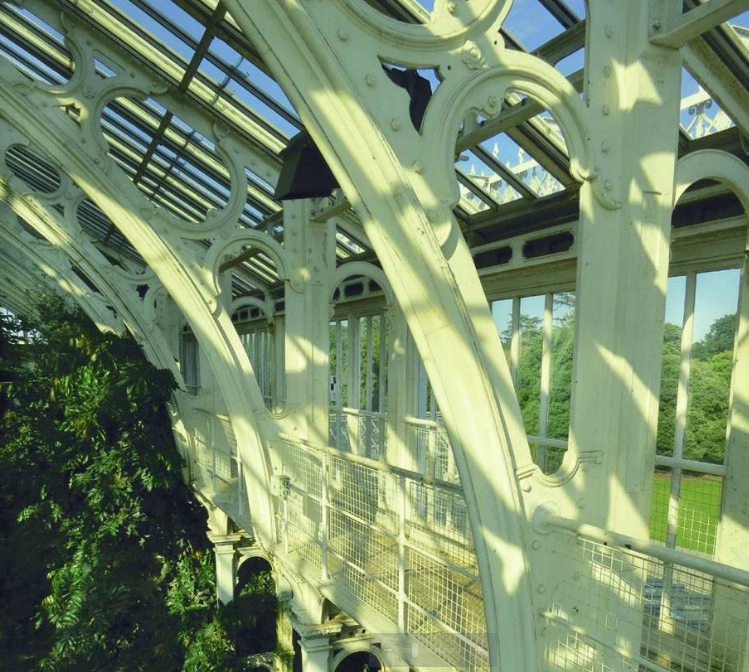 Lying at the heart of London’s Kew Gardens, in spring 2016 the Temperate House is shrouded in a plastic, scaffold cloche, mimicking many of the plants within the botanical gardens, the metamorphic transformation of winter to spring. Yet the Temperate House has at least one more winter of transformation ahead, to complete the £36 million restoration project for the client Royal Botanic Gardens Kew, prior to the formal re-opening in May 2018. Substantial funding support from the Heritage Lottery Fund of £15 million, a DEFRA donation of £10 million, and a range of private trusts, donors and contributions from the visiting public are allowing for an expansion of Kew’s education programme, and public engagement and participation activities.

The 30-month construction period is half-way through, with a handover back to Kew programmed for April 2017. The Temperate House will then remain closed for a further 12 months as it is re-landscaped, replanted and fitted with new visitor interpretation.

The Temperate House, one of the major architectural features of the Royal Botanic Gardens, exemplifies the Victorian approach to collections and glasshouses. Designed by Decimus Burton in 1859, its central block and octagons were complete by 1863, followed in 1897 and 1899 by the north and south blocks. Twice the size of the monumental Palm House at 4,880 square metres and extending to 19 metres in height, the Temperate House is the world’s largest Victorian glasshouse. When first constructed it was the largest glasshouse in the world.

The site is alongside the 1840s avenue between the Palm House and Pagoda Vista. Immediately to the west of it is the later Evolution House, listed Grade II. The position of the glasshouse within the gardens has posed some logistical issues during the restoration process. These have been managed with a large enclosed compound providing amenities, café and changing facilities for the construction workers, and golf-buggy-escorted deliveries through the public areas. 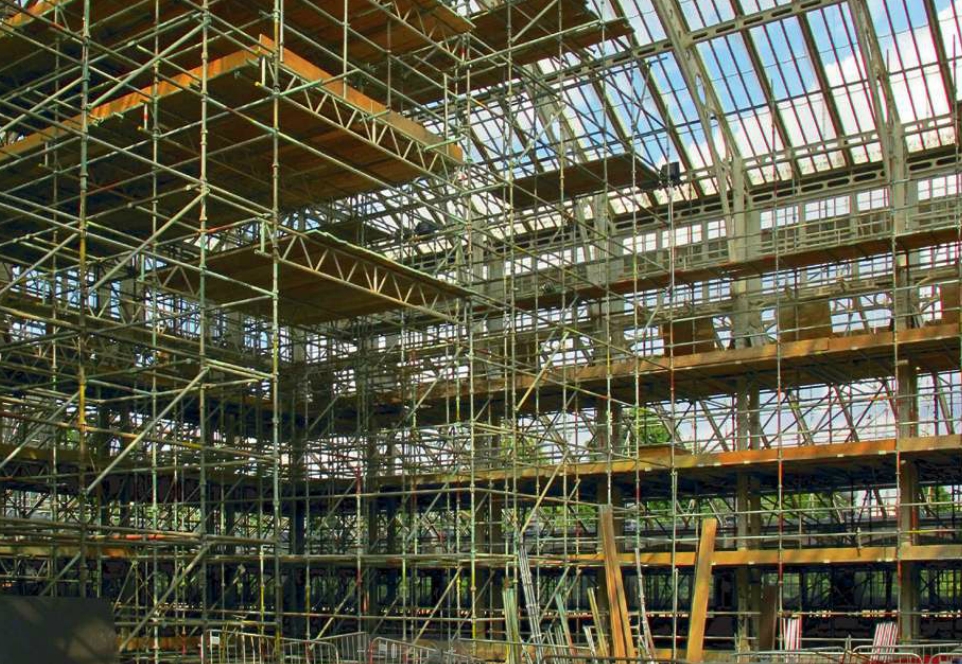 Last renovated in 1970 by Posford, Pavry and Partners and now by a team with Donald Insall Associates as conservation architects, the precinct is in need of a comprehensive restoration, reinvigoration of visitor interpretation and improved access. The building houses important historic living plant collections, including a number of plants of exceptional size and unique heritage value.

The Temperate House range of buildings has a number of longstanding defects, all related to inherent failures in the original construction detailing. As an architect, Decimus Burton was a leader in the innovative use of metalwork for large spanning structures and in the early use of cement. Study of the extensive archive records, including original drawings held at the National Archives, has helped inform the subsequent restoration.

The North and South Blocks both, unusually, incorporate wrought-iron posts and angled braces in their masonry piers, possibly to speed up construction, enabling the main structure to rise before the masonry was completed. This feature is coupled with the use of dense cementitious renders throughout the whole building. Together, these give rise to problems of entrapped moisture, iron corrosion and cracking of masonry.

Without complete dismantling and rebuilding of the structure, the solution proposed is the introduction of a new cathodic protection system, designed by Corrosion Engineering Solutions. It is hoped that the range of techniques proposed will suppress the corrosion of the metal structure and metal components within the masonry by providing the electrochemical condition to control the corrosion process. This will result in less cyclical differential movement and resultant cracking of the cement render.

This restoration, project-managed by Turner + Townsend, will strip the building down to reveal its original metal and masonry core, carry out repairs, and repaint with the latest high-technology, long-lasting and protective paints. The existing irrigation and ventilation systems are no longer functional and sustainable; effective solutions are being implemented to provide the very best conditions for the new collection of plants.

The existing piped and electrical services, largely more than 30 years old, are reaching the end of their lives. They no longer comply with contemporary codes of practice and the two Octagon Basements services areas were badly planned and arranged. Royal Botanic Gardens Kew was the first UNESCO world heritage site to receive the ISO14001 standard. As such the organisation believes that its operation should be undertaken with minimal adverse impact on both the local and global environments.

Environmental considerations are therefore at the heart of RBG’s corporate strategy. In line with this ambition Hoare Lea, consulting services engineers, have designed a new heating and servicing strategy for the building, utilising a new biomass boiler situated within the, back-of-house, Stable Yard Energy Centre to provide sustainable energy for the heating of the glasshouse.

The original glazed roofs of the Temperate House included hand-operated timber sash frames. According to site notes from the 1970s, these were beyond repair and were replaced with an aluminium glazing system.As part of the current restoration, the aluminium system is being overhauled and cleaned, fitted with improved glazing and connected to a new actuator opening mechanism to provide the fine control of ventilation required by the horticultural team. 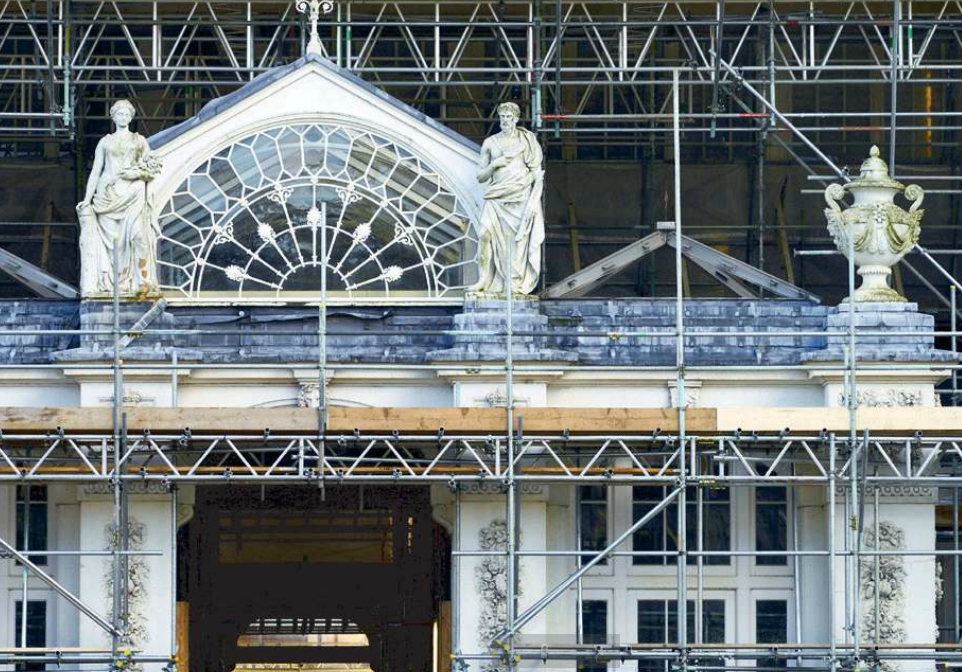 The existing sculpture within the Central Block, somewhat overshadowed by the planting, includes works by Cheere and Rysbrack. The careful restoration of these, and of the urns and decorative plasterwork on the building, is being undertaken by Taylor Pearce. In the case of the urns the aim is to restore structural integrity to the socles and replace missing finials. The sculpture will form an integral part of the new interpretation and visitor interaction proposals.

The present all-over, brilliant white, decorative scheme inside and out is significantly different from that of the original. Moreover, it covers architectural detail previously left unpainted, particularly the high-level sculptural terracotta figures on the east front. Research by Catherine Hassall revealed a total of up to 13 different paint layers in the older parts of the building.

Early schemes within the 1860s buildings exhibited stone-coloured walls and a pale blue and off-white decorative scheme on the structure (not untypical of decoration with a late-Regency influence). This changed to dark green schemes on the metalwork with the addition of the later North and South Blocks (which thus never received the blue scheme).The final design will be developed in coordination with both London Borough of Richmond and Historic England, in order to provide the best possible setting for the foliage and sculptures.

The project is not solely focused on the built fabric of the Temperate House. As part of the construction process and wider educational emphasis of the project, the main contractor, ISg, is offering six three-year heritage conservation apprenticeships and Kew is directly employing a further 10 focusing on horticulture.

The introduction of new landscaping to the precinct by Land Use Consultants, and the integration of ramps, will provide for the first time full level access throughout the whole Temperate House. Internal landscaped paths have been re-configured to correlate in plan more closely with the original Decimus Burton layout and encourage interaction between the public and the planting, and to help with maintenance access. New public toilets and baby-change facilities are being provided. These, coupled with a new servery kitchen and back-of-house kitchenette, changing facilities and staff breakout space, offer Kew the business opportunity for greater event and activity planning for the glasshouse.

The horticultural team has been working since 2013 to move the entire plant species collection from the Temperate House to the newly created Decant Nursery (previously the Munchbox),where it is being propagated. Very large plants have been lifted, potted and transported to the Decant Nursery spaces. Additionally, a new purpose-built Propagation House (which will be a permanent legacy of the project) is providing glasshouse nursery space for continued care of the main collections and space for growing the changing annual displays. The new internal landscaping will generate regional zones for the new plants. Following the successful propagation period there will be a mix of mature and young plants by 2018.

For the next year, the seven remaining trees within the scaffold are being protected and tended in their individual micro-climate cases. Work will continue around them, with the final paint layers being applied before re-glazing the structure beginning at the end of the year.

Retrieved from "https://www.designingbuildings.co.uk/wiki/Restoring_Kew%27s_Temperate_House"
Create an article