There can be no doubt that the driver for prosperity and large scale economic growth and a sustainable future will be industry. While there is a lot of exciting work being carried out in the service industry sector, especially IT and ITES, there is a large scope of improvement and growth in the design environment for the manufacturing industry.

At ANA (https://ana-design.com/), we have tried to use the opportunity provided by the Plasser (https://www.plasserindia.com/en/home/start.html) project, to design and implement a combination of technologies, which will make for a better working environment in the difficult climate (especially summer) of South Gujarat.

Similarly, a combination of in situ, and industrial technology has been used in the building development itself, to create a system of good quality, fast construction and optimise cost, keeping in view certain incremental changes we could achieve as well as the ability to contract firms to be able to stretch their existing capabilities and achieve the expected quality. 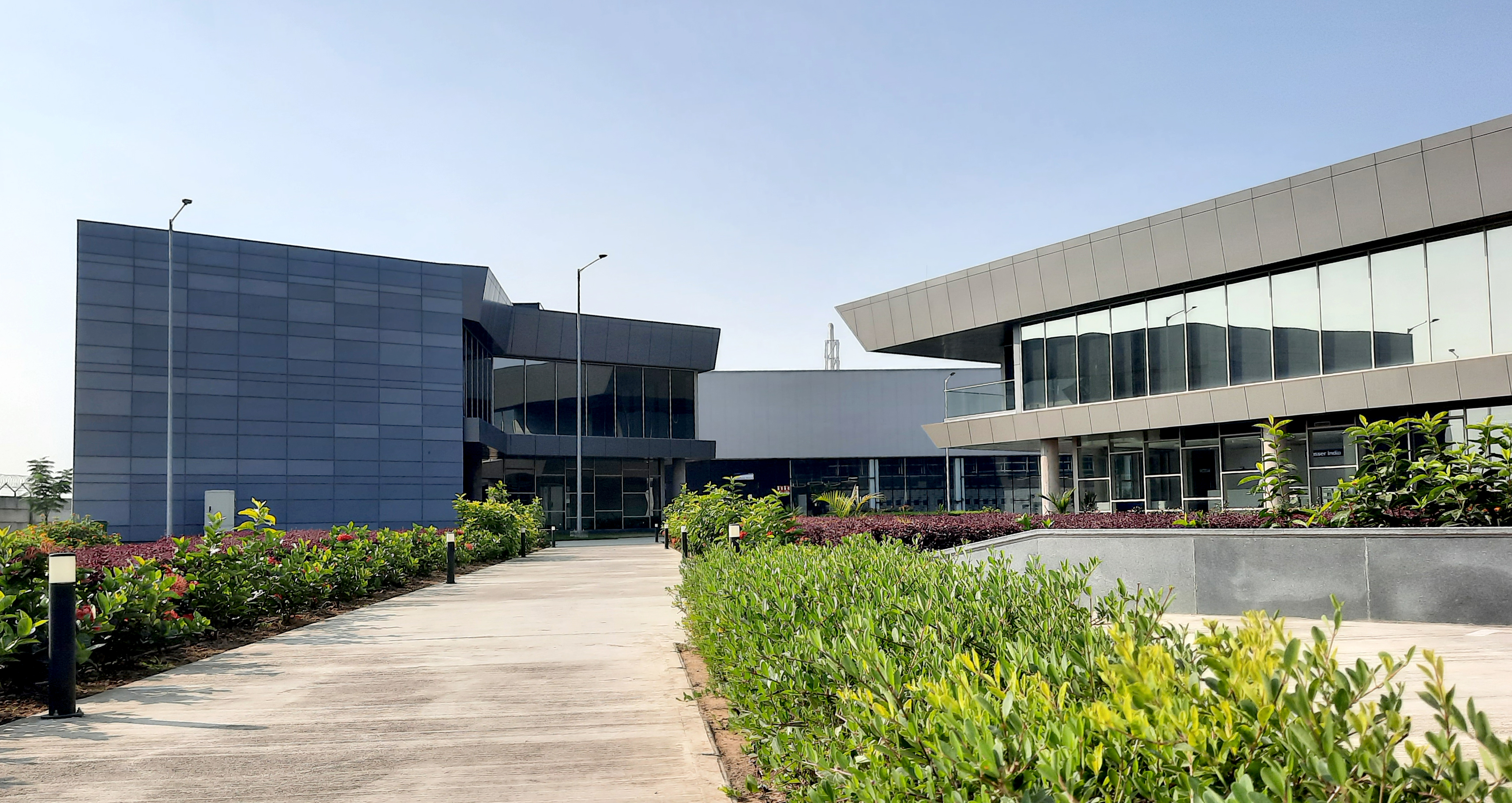 The site plan and process flow closely follow the production philosophy and assembly sequence from Plasser. The sizing of grids and spans was made keeping in mind the production needs movement of goods and the most optimum design against the gantry cranes needed by Plasser for the production.

All services entering into the building and needed for production as well as facilities have been located sequentially near to the centre of the density of their usage, thereby optimising the design of the carrying services, as well as long term transmission loses in the cables and pipes.

The two most important interventions have been in the design of the thermal mass at the base of the building and the comfort conditions achieved thereby using a combination of conventional cooling methods as well as radiant floors and geothermal air tunnels. A radiant floor cooling system is designed to utilise a secondary circuit of the return water from the main chiller system to cool the floors using PEX pipes embedded in the floor. 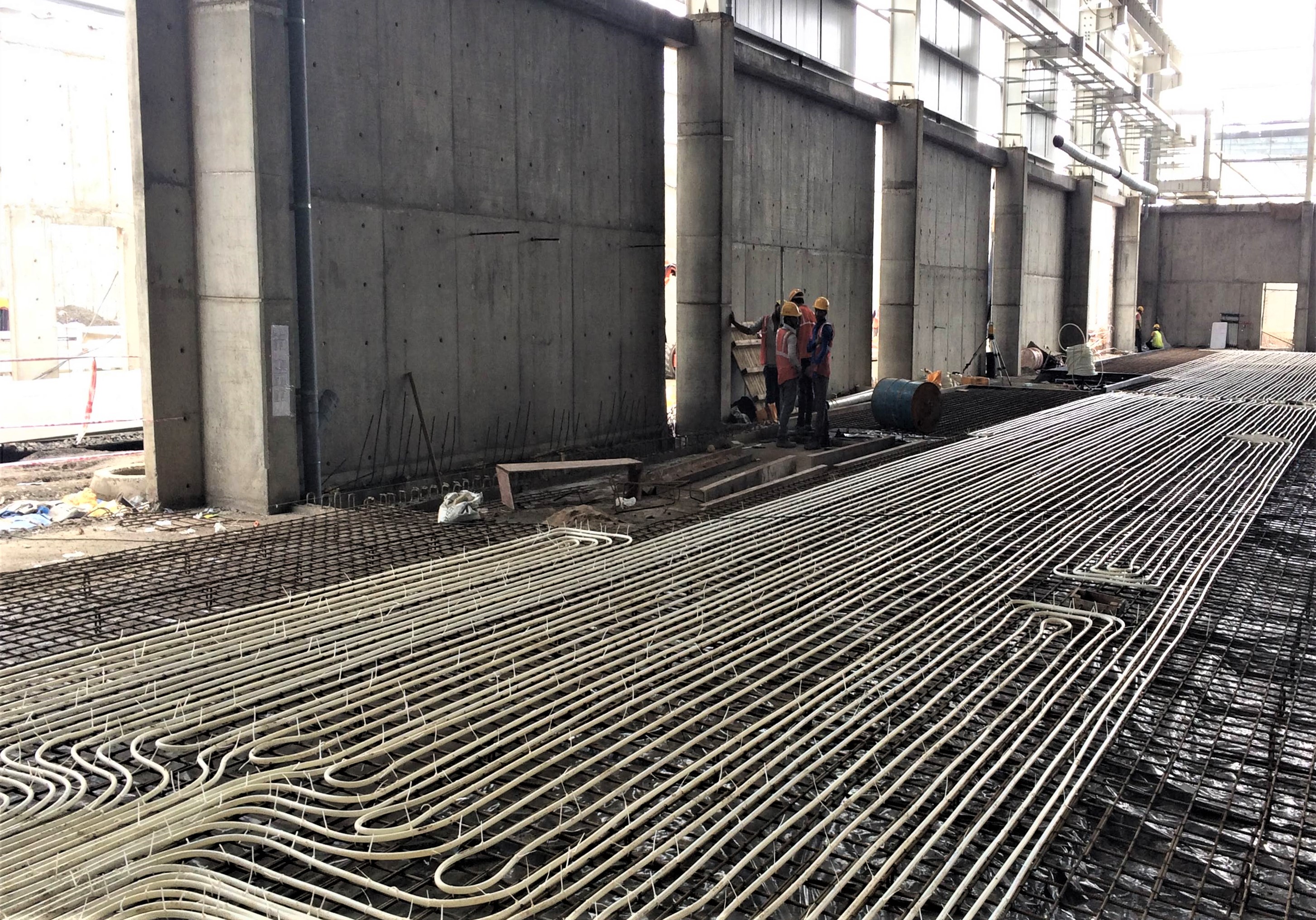 The use of radiant floors and ceilings allowed for substantial reduction in ductwork required to cool the building thereby reduction in material and cost; provided a healthier indoor environment as there is no re-circulation of air in the system thus reducing the thermal energy needs of building occupants; reduced energy consumption as much as 50% of traditional cooling methods. 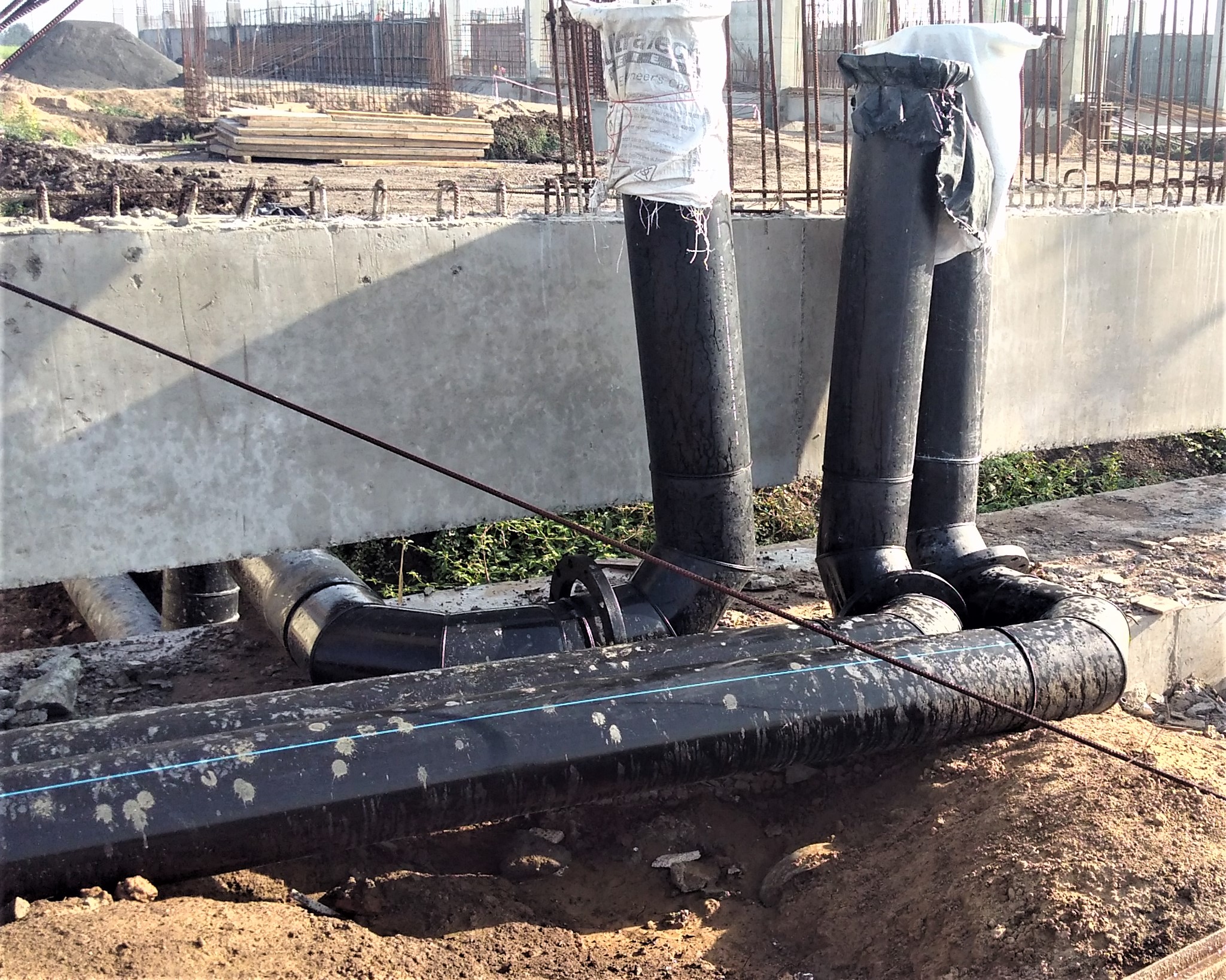 Similarly, geothermal earth tubes were laid within the foundation pits as HDPE pipes for using geothermal energy to allow input air to be cooled prior to passing through Air Handling Units. This passive technology enabled transfer of ground source energy to cool ventilation air which allowed for a reduction of 10 degrees Celsius thus reducing the building operational costs and proving to be 90% more efficient than traditional systems.

We introduced a solar PV power plant to utilize clean energy for the comfort conditioning system to ensure that the capital cost of the comfort system becomes a capex without impacting opex over the long term. This was critical since every rupee spent on opex, higher than competition would hurt the financial prospects of product pricing in the long term.

The solar plant on the roof will provide the necessary energy during most of the year (except monsoon period) for the running of the comfort conditioning systems.

The large thermal mass will prevent major thermal shifts in the building. Once equilibrium is achieved after the initial pull-down, the building will utilise very minimal energy to keep the occupants comfortable, using a combination of conventional airflow through large AHU’s, radiant floor cooling, radiant ceiling panels ( in the office area) and air forced through geothermal tubes. 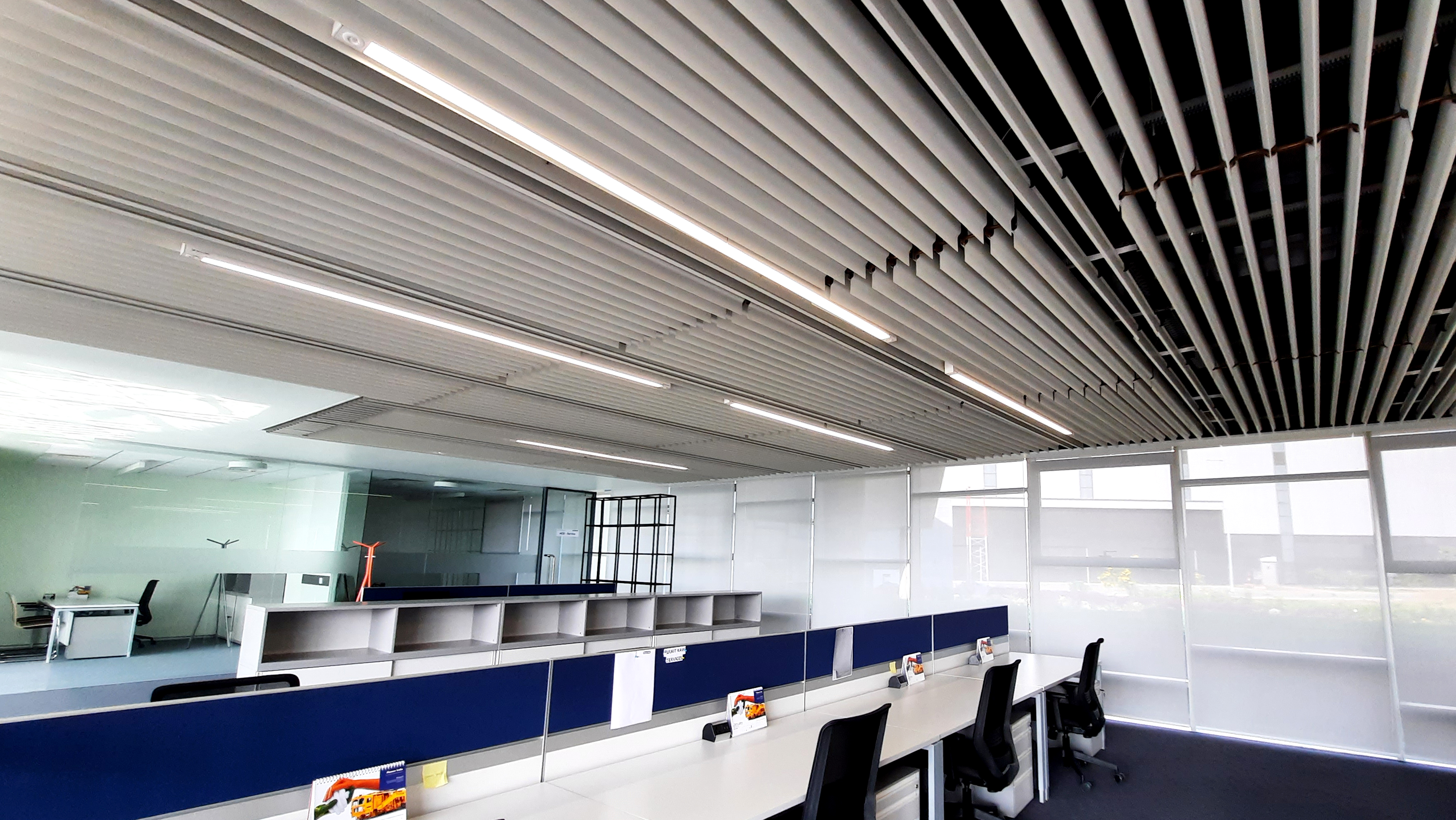 Another notable feature of the building is the use of PoE for the smart lighting solution. Where the plant area lighting utilises optical sensors to switch on and off, the number of light fittings required for pre-set lux levels, the office lighting goes several steps further.

The sensors embedded in the PoE lighting fixtures allow its occupants to control thermal comfort as well as lighting, using an intelligent interface between the lighting fixture and the air conditioning of the building.

Each occupant of the building will be able to control his or her personal space in the building using a smartphone interface. Once a particular area is not occupied, the intelligent system will /lower all unnecessary lighting and air-conditioning. This will allow the building to save energy and optimise performance without dependence on human behaviour. 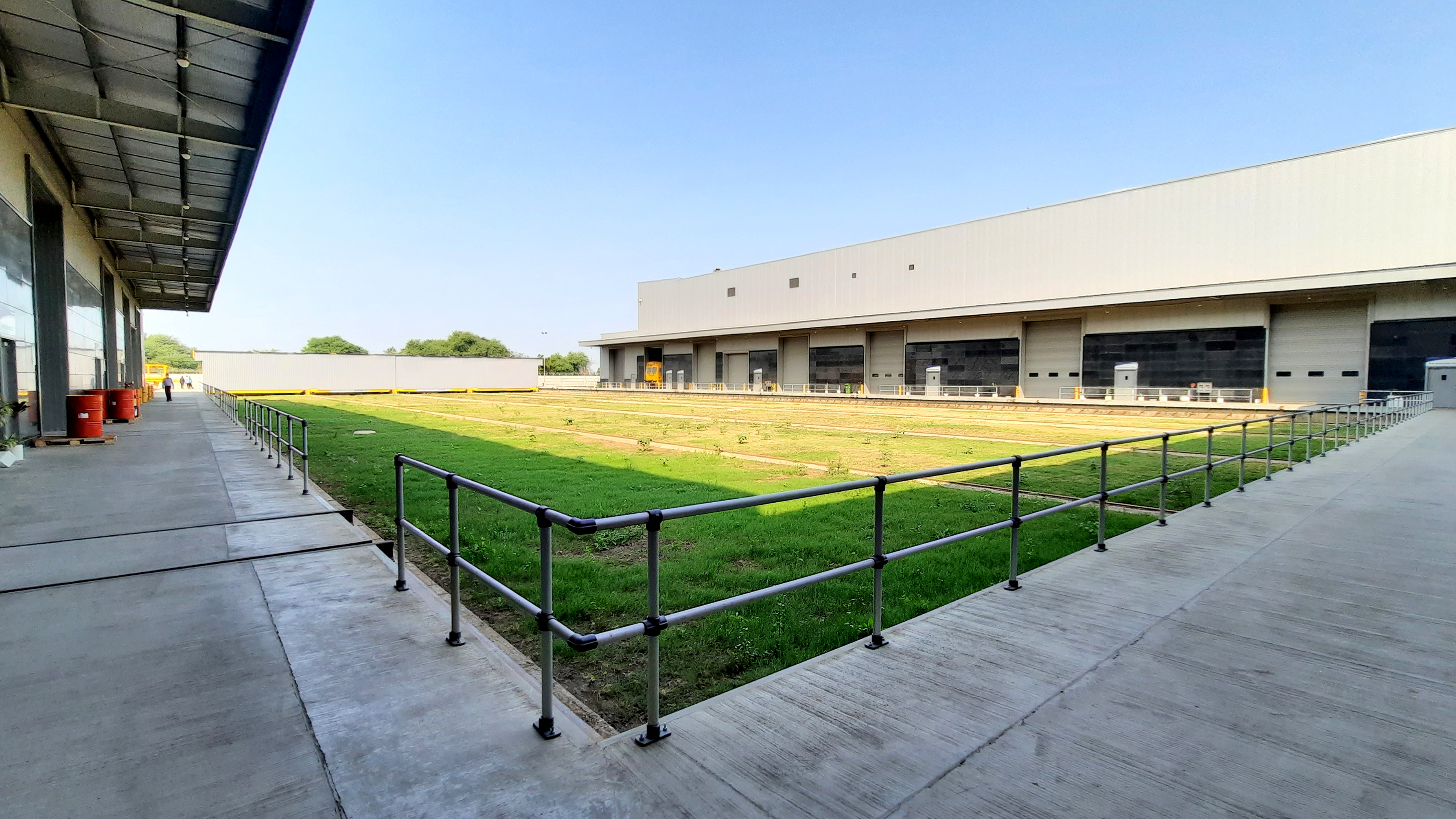 The rainwater management system is also planned to ensure zero run-offs from the site. The entire site is graded to channel water into large holding pits, which are in turn connected to recharge wells. Typically, the capacity of the recharge wells slows down as monsoon progresses, owing to the saturation of subsoil conditions. 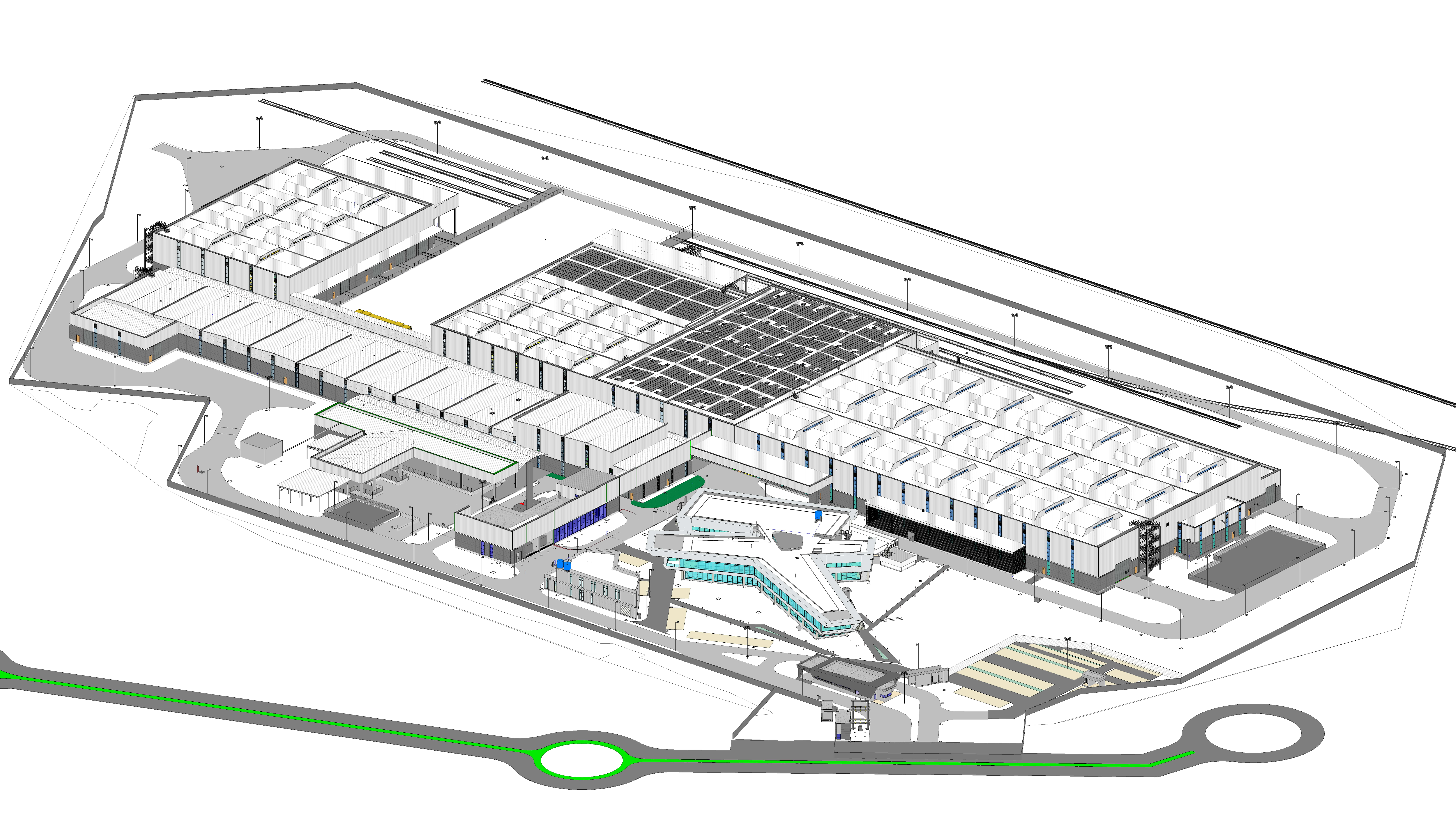 ANA (https://ana-design.com/) was able to optimise and interconnect all the systems using the power of BIM through Revit and Navis-Works. This powerful software system allowed different specialities of the design and engineering teams to function as one.

We were able to accommodate constantly evolving requirements from the client as their faith in the business and the ability of the project team grew. Multiple facilities and faculties in the project were added to cater to better and bigger machines.

ANA (https://ana-design.com/) was able to keep the project cost within the stipulated budget and build generally in line, due to the large scale database, easy visual interface and ability to adapt provided by the design software used.

Retrieved from "https://www.designingbuildings.co.uk/wiki/New_Plasser_India_Railway_Equipment_Manufacturing_Industry_-_A_Case_Study"
Create an article