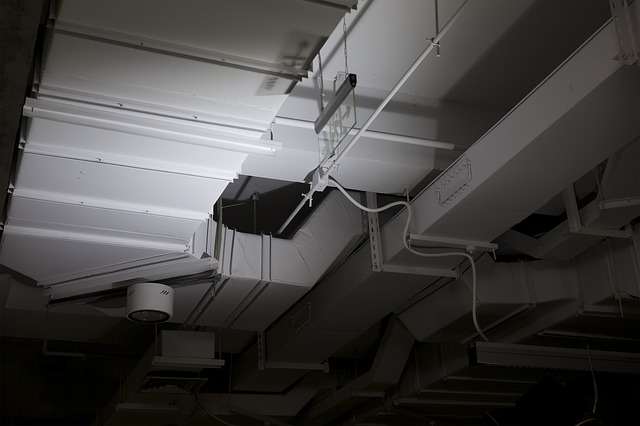 Ductwork, ducts, or ducting, are conduits, or tubes, that typically form part of a ventilation system, used to convey air throughout a building. An example of a simple elementary duct is a fireplace chimney, used to convey smoke to the outside. Hard pipes used to transfer water or gas are not classed as ductwork.

Duct design involves planning (laying out), sizing, optimising, and detailing. Ductwork should be among the first items to be considered when designing a new building because of its importance in the overall utility of the building, and the need to integrate complex duct routes with other elements of the overall design. This can be particularly difficult where structural elements pass through building services spaces, such as the downstands of beams, or where ducts have to pass through other elements of the building.

Ducts can be fabricated from a range of materials:

Ductwork layouts may be very complex, involving a number of supply and return ducts, that branch to all parts of a building. Typically Heating Ventilation and Air Conditioning (HVAC) ducting will run through voids above a suspended ceiling, supplying and extracting air from the occupied spaces below through diffuser grilles. Air may be drawn or blown through the ducts by fans or by air handling units.

Duct sizes are calculated based on the relationship between air volume, size, air velocity and resistance. The requirements for the provision of air within buildings is set out in Part F of the building regulations, Ventilation.

Other components that can be incorporated in ducting systems include:

Before approval, ductwork should be tested to confirm it is adequately sealed.

NB The Scottish Building Standards, Part I. Technical Handbook – Domestic, Appendix A Defined Terms, defines a duct as: ‘…the structure, trunking, or casing, with any apertures, enclosing a passage, other than a flue, used solely for conveying air, gases, or refuse.’

The 2018 International Residential Code (IRC), published by the International Code Council (ICC) defines a duct system as: ‘A continuous passageway for the transmission of air that, in addition to ducts, includes duct fittings, dampers, plenums, fans and accessory air-handling equipment and appliances.’

Air duct cleaning units produce commotion which can be problematic, and this can be aggravated where ventilation work goes between acoustically separate spaces. For this situation, acoustic attenuators may be incorporated into the air taking care of unit or ventilation work.