A cavity wall is a wall formed by an inner skin and an outer skin of masonry (sometimes referred to as ‘leaves’ or ‘wythes’ if they are a single unit wide), connected by ties, but separated by a cavity. The masonry is formed by units such as brick, stone or block. Very generally, if the external walls of a building are less than 30 cm thick, then they are unlikely to include a cavity.

Cavity walls existed in Greek and Roman times, but only developed as a component of more recent construction in the 18th and 19th centuries. Even during this time, they were very rare, and generally involved two skins of masonry bonded by headers spanning across the cavity. The use of metal ties to connect the two skins only emerged in the second half of the 19th century and then became more common towards the beginning of the 20th century.

In the UK, most new, external masonry walls have been cavity walls since the 1920s. 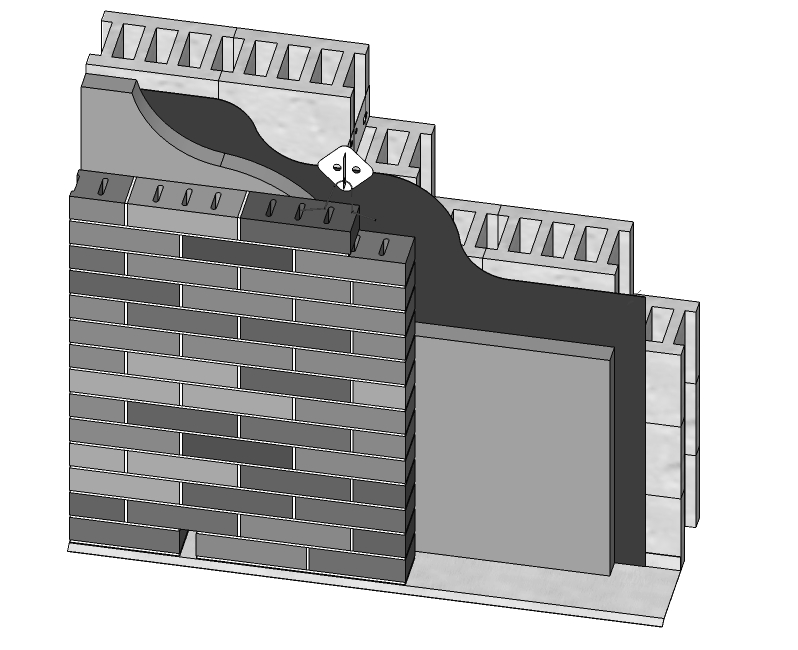 Cavity trays are included where there are penetrations across the cavity, such as: 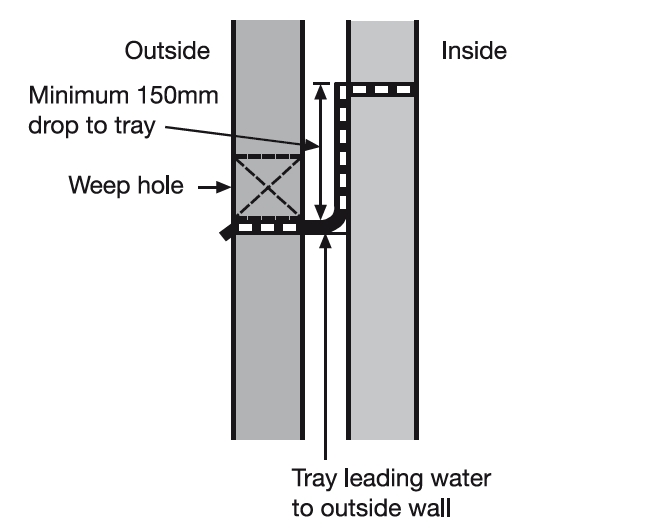 Cavities are ventilated to ensure that any accumulating moisture is able to evaporate and vent to the outside.

Cavities can also provide a space for the installation of thermal insulation, and as the requirement to reduce the passage of heat between the inside and outside of buildings has increased, so the width of cavities has also tended to increase.

This means that older buildings tend to transfer more heat between the inside and outside and so can be colder in the winter, hotter in the summer, can suffer condensation, can be expensive to run, are high emitters of carbon and may not provide very good levels of thermal comfort.

Typically the U-values (a measure thermal conductance) of walls are:

The approved documents to the building regulations set limiting fabric standards for the elements of buildings. These are area-weighted averages that those elements may not fall below, and generally, to comply with the building regulations, fabric performance will need to be significantly better than these limits. The limiting U-value for walls in new dwellings is 0.3 W/m2K and for buildings other than dwellings is 0.35 W/m2K. Where new thermal elements are constructed, such as in a new extension, they should be at least 0.28 W/m2K.

Insulation is generally fixed to the external face of the internal skin of the cavity wall. This allows the remainder of the cavity to be ventilated without significant heat loss. However, in some cases, particularly where insulation is retrofitted, the entire cavity is filled. Great care must be taken in this case to ensure that a path is not created for the penetration of moisture between the outside and inside.

The exact dimensions required to satisfy Part L of the building regulations will depend on the type of building and the thermal conductivity of the materials selected. Typically, with the correct selection of materials, a 102.5 mm external skin, 100 mm cavity (either filled or part-filled) and 100 mm internal skin, plastered on its internal face can be made to comply with part L.

Cavity walls that are not insulated can have insulation retrofitted by drilling small holes at regular intervals in the external skin and then ‘blowing’ or ‘injecting’ insulation into the cavity from the outside. Typically, water-repellent insulation is used such as expanded polystyrene (EPS) beads combined with a binding agent, or urea formaldehyde (UF) foam insulation. The drilled holes are then filled to match the existing finish. See Cavity wall insulation for more information.

To prevent this, Vapour Control Layers (VCL) or vapour barriers are positioned on the warm side of the cavity insulation, (i.e. between the insulation and the inner masonry skin), preventing the warm moist air from penetrating to a point where it might reach its dew point temperature.

Retrieved from "https://www.designingbuildings.co.uk/wiki/Cavity_wall"
Create an article