How to lay bricks 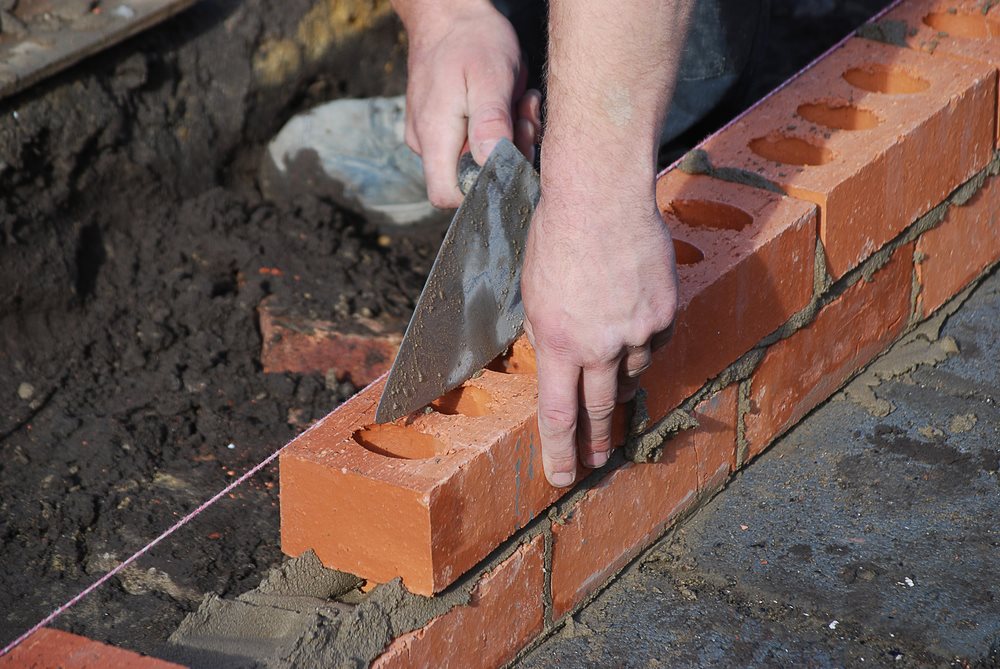 Before starting to lay bricks, it is necessary to calculate the number of bricks required. In the UK, standard bricks are 215 mm long × 102.5 mm wide × 65 mm high. With a standard mortar joint of 10 mm, a repeating unit of bricks laid in a stretcher bond will be 225 mm lengthwise and 75 mm in height.

Typically, the form of a basic structure might be plotted using string, level and tape measure. If there is not an existing slab, a footing may need to be poured and left to cure before bricks can be laid on top of it.

The bricks should be laid out at both ends of the structure, with a string line stretched between them to act as a guide when laying the first courses of bricks. It is also recommended that guideposts are used – timber boards driven into the ground at either end with markings to ensure the bricks are laid level.

A mortar bed is generally laid on top of the footing along the string line, using the trowel to make a V-shaped trough along the mortar as this enables the bricks to be tapped into position more easily. The first brick should be laid at one end and tapped slightly to ‘bed in’. The next brick should be ‘buttered up’ with mortar spread onto each end before being placed to abut the first brick. The trowel should be used to cut away excess mortar that is squeezed out from underneath or in between the bricks.

Bricks should always to laid with staggered vertical joints to avoid creating a line of weakness. To achieve staggered vertical joints, some bricks may have to be cut in half. A mark should be made on the brick where the cut is to be and, after placing on solid ground, a sharp blow made using a bolster chisel and lump hammer. Rough edges can then be chipped off.

If the bricks being used have an indentation (frog) rather than holes, they should be laid with the frog facing upwards, this ensures that the frog is completely filled with mortar. For more information see: Which way up should you lay a brick?

Once the first course of bricks has been laid, the level along the top should be checked with a spirit level, tapping each brick if necessary to make minor adjustments. The second course should be begun with a half-brick on both ends to avoid lining joints up with the course below if a full brick were to be used. At both ends, place a full brick next to the half-brick and continue as per the first course.

To remain level, the wall should be built up at both ends a course higher than the one being worked on. This will make it appear stepped at each end. The bottom courses are filled in from the ends inward, each end built up one course higher, and so on. It’s important to remember to alternate half-bricks with full bricks at the end of each row to ensure the joints do not line up.

Brick pillars can sometimes be added part-way along or at the end of a wall. Generally, this is a ‘mini-wall’ that extends out from the main wall to form a pillar. A brick should be placed side-on to the end of the wall at the point where the pillars are to start. The pillars should always be built at least a course higher, with the string line moved up as the next course is laid. The level should be checked after each course is completed.

Before the mortar sets it is important to fill in any holes, before striking (pointing) them to provide a neat and tidy finish. The brickwork can then be brushed with a soft hand brush to remove any excess mortar.

Retrieved from "https://www.designingbuildings.co.uk/wiki/How_to_lay_bricks"
Create an article