Note: In March 2016, this strategy was superceded by the Government Construction Strategy 2016 2020. 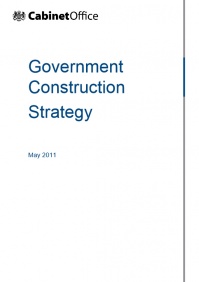 The intention of the strategy was to reduce the cost of public sector construction by up to 20% by the end of this parliament, and to stimulate growth in construction.

The strategy acknowledged that whilst public sector construction projects account for 40% of the £110bn per annum expenditure on construction in the UK, the government had not been very effective at exploiting this enormous purchase power. It set out measures by which the government could make better use of its power and at the same time, lead what it saw as much needed changes in the industry.

The strategy followed on from the Latham Report (Constructing the Team, 1994) and the Egan Report (Rethinking Construction, 1998), and made a similar, somewhat damning assessment of the industry, suggesting amongst many criticisms that:

The detailed proposals set out in the strategy included:

Six Task Groups were established for different areas of the strategy:

In July 2012, the government published Government Construction Strategy: One Year On Report and Action Plan Update:

In July 2013, the Government published: Construction 2025, Industrial Strategy: government and industry in partnership, setting out its long-term vision for ‘…how industry and Government will work together to put Britain at the forefront of global construction…’

Rather ambitiously, the report proposed:

In March 2016, however, the strategy was superceded by the Government Construction Strategy 2016 2020. This revealed that only £3.3 billion had been saved over the entire period of the first government construction strategy compared to the £8.8 billion a year that had been targeted. The Government Construction Strategy 2016 2020 set a much less ambitious target of £1.7 billion over the whole period 2016-2020.

The strategy was broadly welcomed, but there was some scepticism about whether the government would follow it through, and how the roll out of BIM would be implemented, along with some criticism that the increasing use of large, long-term contracts and framework agreements might act as a barrier to entry to new suppliers and so a barrier to innovation.

The size of the savings projected was also questioned given that the recession meant the industry was already at its least profitable and most productive since records began (ref Constructing Excellence and Glenigan: Industry performance report).

Despite a great number of reports about the construction industry, and numerous attempts to improve efficiency, the perception persists that the industry is wasteful and adversarial, it might be inferred therefore either that; under the circumstances the industry operates more effectively than it appears from the outside; expectations are unrealistic; or recommendations have been consistently poorly implemented.

Transforming Infrastructure Performance, published by the Infrastructure and Projects Authority (IPA) in December 2017 committed that the IPA would 'refresh' the Government Construction Strategy in 2018.

Retrieved from "https://www.designingbuildings.co.uk/wiki/Government_Construction_Strategy_2011_2015"
Create an article