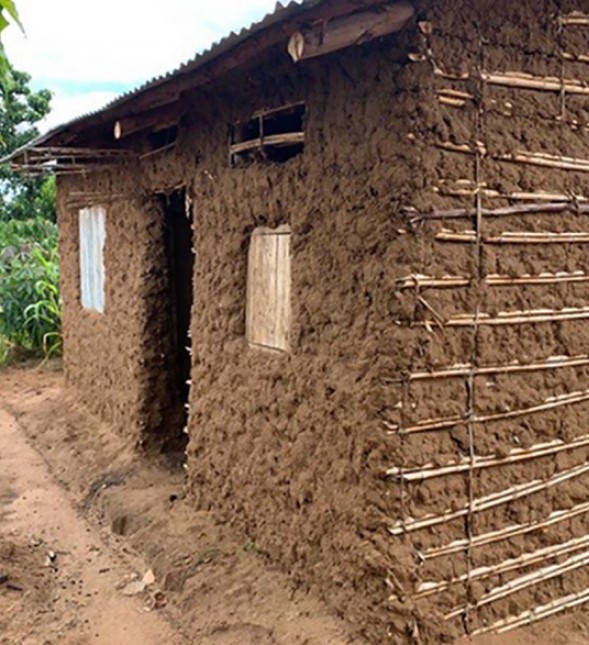 Mark Harry, MCIAT, shares his account of a trip where he stayed within the confines of Kishenyi Village, Western Uganda, which is 7km from DR Congo and close to Queen Elizabeth National Park.

It is traditional within the locality that when the son of a family is to get married a parcel of their parent’s plot is given to him. This is where he can build his own house for his family.

There are two main types of houses built within the village. The first built from bricks and the most common is built from timber with mud infill. Both types are single storey only.

The bricks are made on site. There is a local quarry where all the locals go to buy clay to make their bricks, pots, earthenware etc. When making bricks, it is common practice to add earth to the clay so that extra bricks are made and keep the cost to a minimum.

The earth where I stayed was quite sandy. A timber mould could make two bricks at a time. It was then emptied out onto the earth, and after a few hours it was carefully taken onto a stack to cure with protection from the rain on the top. Temperatures were a constant 24 degrees.

Brick built houses had a plastic dpc at floor level. There were a few brick houses that were finished with smooth render, plaster inside and tiled floor – very few, but they were there!

There was no water supply within the village, so all water was collected in Jerry cans at a local source.

Unless you had money, this was the main type of house built.

The person I had most dealings with was Gumi Onnissmus. He was in the middle of building his own house in a timber frame on his Mum’s land. It was typical to build as - and when - money came along. It can take quite a few years to finish off a house!

The size was 6m x 5m x 2.5m to eaves. The shell and roof had already been completed. It was made from a framework of straight branches (approximately 75mm dia at 600 mm centres) and infilled with sand/earth and clay.

There are horizontal bamboo canes every 24” (600mm) to support the earth/clay infill on both sides of all walls. The bamboo canes and timber framework are fixed and held together with banana fibres – no string. The roof set at 20 degrees is clad with steel corrugated sheets with eaves overhang about 30” (762mm). Eaves were about 2.5m high.

The roof structure was from branches in traditional rafter spacings with a few ceiling ties. A central timber strut came down on the centre wall. The walls are approximately 125mm wide.

Gumi’s house will have two bedrooms, a sitting room and a dining room.

Each room had a window, and above each there was an opening for vents to be installed. The vents were a fine metal insect mesh on the inside to stop mosquitoes entering with a vent to each gable.

To render the outside walls, Gumi mixed the earth/clay with some ash to give a better protection against the weather.

All the houses that I entered had an earth floor. The children sat and ate their food on a raffia mat while the grown-ups sat at the table.

There were no ceilings but exposed roof timbers. In addition, there was no water and no electricity. Lighting was a small oil filled lamp that gave a background light. After tea, which was about 21:00, the family would sing and the children dance.

There were no doors on the inside - just a curtain to each door opening. This was typical to all the houses that I visited.

Everyone within the village had a separate building for their kitchen. It was mostly built from bricks (but not always). Rocks were placed on the floor and a fire made from wood, sticks, branches etc. between the rocks. Saucepans went onto the rocks. Some kitchens used pieces of termite hills instead of rocks to hold their saucepans, because it remained a lot cooler due to the ventilation holes through the (fired) pieces. Kitchen sizes were approximately 1.2m wide x 2.4m long with a steel corrugated roof. Above the fireplace at approximately 1.7m high was a timber framework that was used to dry out banana leaves, banana fibres and anything that would be damp.

Outside the kitchen everyone had a two-tier timber framework (from branches) approximately 1.2m high and a shelf below x 1m x 1.5m. This was used to place the saucepans out to dry after washing them clean. It was also common to put down a few banana leaves first on the framework.

During my two weeks stay it rained quite frequently. I did not see (or smell) any damp in any house that I entered. Even though it rained, the sun came out; within an hour, all was dry again.

Retrieved from "https://www.designingbuildings.co.uk/wiki/Village_homes_in_Western_Uganda"
Create an article