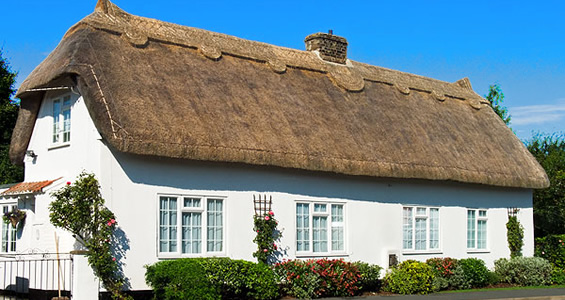 Thatch roofing is a traditional roofing method that involves using dry vegetation such as straw, water reed, rushes, sedge, and so on to create a roof covering.

Thatch is still used in some equatorial countries, such as in Fiji where palm leaves are used, Dominica with feathered palm leaf roots, and Kenya with sugar cane leaf roots. In developed countries, thatch roofing has started to become more popular again, as a conscious design choice because of its aesthetics and for its ecologically-friendly credentials as a sustainable material.

The material composition of thatch, with its natural voids and surface irregularities, provides excellent insulation when dry and compact. However, when degraded with an accumulation of moss and rainwater, the insulation properties are less reliable. Thatch can also be vulnerable to fire.

Thatched buildings were very common with indigenous peoples such as the Maya, Inca and Aztecs. Across Europe too, wild vegetation was used to cover shelters and primitive dwellings. Straw is believed to have been used as a roofing material in the Neolithic period when cereal agriculture began to develop.

In some parts of the UK, thatch was the only commonly-available roofing material until the late-1800s, when the commercial production of slate began, and the new network of canals and railways, made other materials more viable. The use of thatch began to decline towards the end of the 19th century because of the agricultural recession and the urbanisation of previously rural people.

The most common type of thatching material used in the UK was straw, either longstraw or combed wheat reed. Water reed was used in wetland areas such as the counties of East Anglia. This led to a diversity of styles, with different types of roof being characterised by the type of thatch. For example, combed wheat reed roofs are shallow pitched, whereas longstraw roofs are more steeply pitched.

This is the most durable of the thatching materials, with a life expectancy of around 50-60 years. When re-thatching with water reed, new reed is fixed directly onto the rafters, starting at eaves level, with the butts of the stalks exposed. Steel or hazel sways hold each layer of reed in place. A legget is then used to dress the thatch into shape.

Longstraw must be made into yealms before it can be used for thatching. A yealm is a tight, compact layer or straw which is level at both ends. This straightens and tidies the straw, making it manageable for thatching.

When re-thatching with longstraw, existing material will usually only be removed back to a base coat, before the new straw is fixed using hazel spars. Netting is usually fitted to the whole roof as longstraw is more susceptible to attack from birds.

The ridge of a thatched roof must be carefully maintained every 10-or-so years, as the fixings are external. The two main types of ridge are as follows: 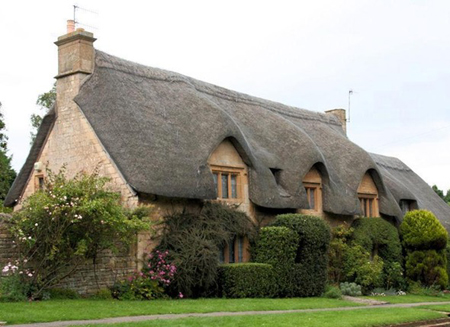 The performance of a thatched roof depends on the roof shape and design, the pitch, the location of the building (in terms of weather conditions), the quality of the material, and the skill of the thatcher.

The natural properties of thatch have a number of benefits:

However, there is the perception that thatch roofing is at a higher risk of fire, meaning that thatched houses are harder to insure. Thatched roofs can also be more expensive than other coverings, and costly damage can be caused by birds, rodents and insects.

Retrieved from "https://www.designingbuildings.co.uk/wiki/Thatch_roofing"
Create an article