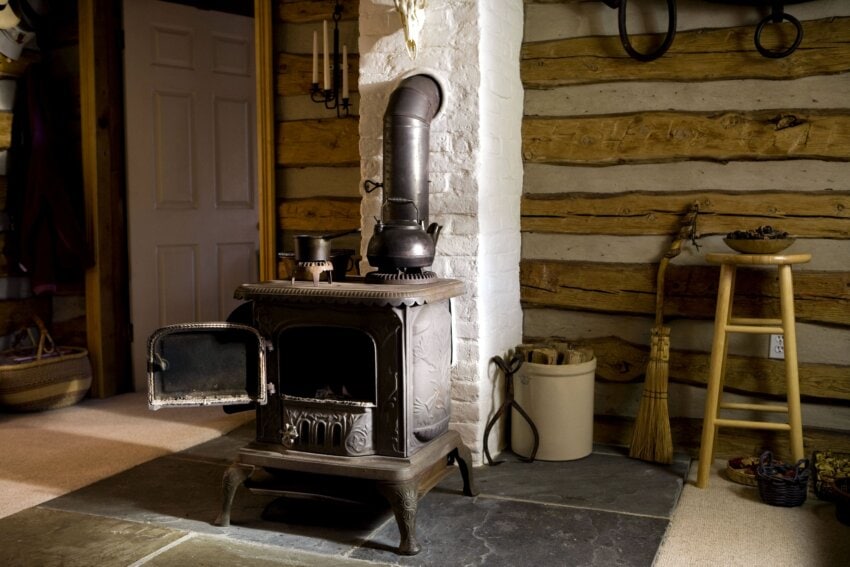 A stove is a device that uses fuel to produce heat in a room, and or, to cook food.

The word ‘stove’ comes from the Old Norse word, ‘stofa’. The term was used to describe a type of enclosed room which was sometimes heated.

The term stofa appeared in English in the 1400s, which was when the modification ‘stove’ was adopted. This term - describing a heated room - was frequently used until the 1800s.

Early enclosed stoves were used to help make room temperatures more comfortable. They were thought to be more efficient than open fires, and as they became better developed, they could be controlled through various ventilation systems.

In 1742, Benjamin Franklin invented the Franklin stove, which was also referred to as a circulating stove due to its use of a baffle to circulate air. This device was designed to generate more heat while producing less smoke, but it did not achieve significant commercial success in its original form.

With the development of central heating, the reliance on stoves for heat decreased. However, in some places, they are still popular methods of generating warmth.

There are many different types of stoves used for heating, including wood, coal, charcoal, crop residue and those that burn other natural materials.

Early stoves consisted of nothing more than three stones used as a base to support a cooking vessel placed on top of an open fire. This basic type of stove is still in use in different parts of the world. In some places, there have been additional modifications to facilitate efficiency (by adding fuel and circulating air) and safety (by providing better access and control).

The earliest enclosed stoves were used in China around 200 BC. A variation on the Chinese device was used in Japan from the 200s to 500s AD. A similar type of stove was used roughly during the same period in the Middle East. Each of these devices used fuel - typically wood or charcoal - within a closed stove made of clay or some other fireproof material. Cooking vessels sat on top of the devices or were suspended above, and food was heated from fires below. Some of these stoves were portable, but others were permanently fixed.

In Europe, open fires were primarily used for cooking until the 1700s. In 1728, cast iron was used to manufacture cooking devices designed in Germany. These were known as jamb or five-plate stoves.

Then, in 1735, the French architect Francois Cuvilliés introduced a wood burning kitchen stove known as the stew stove or Castrol stove. This device enclosed the fire safely and provided several openings covered by iron plates with holes for cooking.

This method of cooking prompted the development of cast iron stoves that used flat bottomed pots to rest on plates. These types of pots replaced the round bottomed cauldrons that had been suspended over the heat source in the past.

By the 1790s, the demand for a larger kitchen stove prompted the scientist Sir Benjamin Thompson (also known as Count Rumford) to apply his studies of heat to the development of the modern kitchen stove. His knowledge of fireplaces, furnaces and chimneys resulted in the introduction of the Rumford stove, which had a single fire source able to heat multiple cooking vessels at different levels.

At the time, the Rumford stove was considered an industrial breakthrough, but for most kitchens, it was simply too large. A smaller cast iron device known as the Oberlin stove was developed by the inventor and religious reformer, Philo Penfield Stewart. After making modifications to his earlier version (referred to as the PP Stewart Summer and Winter Cooking Stove), Stewart patented his compact wood burning device in 1834 and successfully introduced it to the market.

Gas and electric cookers became popular around the time of the First World War, although they may have been awkwardly housed in small recesses. Then, a major shift in kitchen design occurred in the 1920s, when the kitchen became the domain not of servants but the housewife. This resulted in the production of modern stoves, which were generally freestanding. By the 1950s, some stoves could be integrated into kitchen cabinetry.

Modern kitchen stoves are typically made up of an open, built-in stovetop (also known as cooktop or hob in the UK, or a range in the US). This is used for searing, boiling, stir frying and other methods that cook food by using direct heat. Some common types of stovetops include gas or electric hobs and induction cooktops.

Freestanding stoves have ovens as well as stovetops. This enclosed device heats the air inside and is used for baking or roasting. Separate oven units may be fitted into a wall. These are known as wall ovens and are generally located adjacent to the stovetop.

Electricity or natural gas are commonly used to generate the heat in kitchen stoves, although biomass may be used to fuel cookstoves in developing countries.

Retrieved from "https://www.designingbuildings.co.uk/wiki/Stove"
Create an article