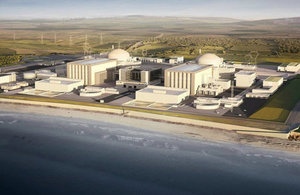 The culmination of two years of negotiations, the plant, sited at Hinkley Point in Somerset, will provide power for 6 million homes during its 60-year life. A Strategic Investment Agreement was signed which sees the French mainly state-owned EDF take a 66.5% share, with CGN taking the remaining 33.5%, and EDF have indicated they may sell another 15% stake at a later date.

EDF have forecast the cost of the new plant as £18 billion, becoming operational in 2025, although the agreement states that it can be delivered at any point until the final deadline of 2033.

Coming on day-two of the Chinese President Xi Jinping’s official State Visit to the UK, it is hoped that the deal will be the first of more than £30 bn worth of deals between the two countries to be struck during the four-day visit. In addition to Hinkley Point, the agreement also established a wider UK partnership to develop new nuclear power stations at Sizewell and Bradwell.

The Funded Decommissioning Programme has been approved, which the government claims will make sure that tax payers do not bear the cost of future decommissioning. The government has guaranteed to buy the electricity for £92.50 per megawatt hour for 35 years, more than double today’s wholesale electricity price; a move that has drawn criticism for the rise in energy bills it may lead to for future consumers.

“I’m pleased to announce that today we are signing an historic deal to build the Hinkley nuclear power station, providing reliable, affordable energy for nearly six million homes and creating more than 25,000 jobs, all while working together to build a low-carbon future.”

“We are tackling a legacy of under-investment and building energy infrastructure fit for the 21st century as part of our plan to provide the clean, affordable and secure energy that hardworking families and businesses across the country can rely on now and in the future. The UK is open for business and this is a good deal for everyone. This will provide essential financial and energy security for generations to come. ”

“Hinkley Point C and successive nuclear projects will guarantee the UK the reliable, secure low carbon electricity it needs in the future. Nuclear power will save customers money compared with other energy options and provide a huge boost to British industrial strength, jobs and skills both in Britain and abroad. Today’s announcements are also good news in the fight against climate change.”

On 28 July 2016, EDF made their final investment decision. However, in a move that surprised many, the government delayed making their own final decision, saying they want to conduct a further review with an announcement in the early autumn.

The project has been beset with controversy due to estimates that Hinkley Point C could eventually cost British taxpayers almost £30 bn in subsidies to EDF and CGN.

There have also been divisions within EDF over the viability of the mega-project. In the run-up to the board meeting, one of the directors Gerard Magnin resigned on the grounds that the project was 'very risky'.

The power station will generate 7% of the UK's electricity when it starts to produce in 2025, although concerns remain about the increase in wholesale prices that will end up being passed on British consumers.

Another concern is the unproven European Pressurised Reactor (EPR) design. The prototype is under construction at Flamanville in northern France. Construction started in 2007 and was supposed to be up and running by 2012, however, it is still not finished and is already three times over budget. EDF says Flamanville is now scheduled to start up by the end of 2018.

In September 2016, the Prime Minster Theresa May gave the go-ahead to the nuclear power station and announced 'significant new safeguards' for future foreign investment in critical infrastructure.

After Hinkley, the government will take a 'special share' in all future nuclear new build projects, in an attempt to ensure that significant stakes cannot be sold without the government’s knowledge or consent.

The Office for Nuclear Regulation will be directed to require notice from developers or operators of nuclear sites of any change of ownership or part-ownership.

There will also be reforms to the government’s approach to the ownership and control of critical infrastructure to ensure the full implications of foreign ownership are scrutinised for national security issues.

Greg Clark, Secretary of State for Business, Energy and Industrial Strategy, said: "Having thoroughly reviewed the proposal for Hinkley Point C, we will introduce a series of measures to enhance security and will ensure Hinkley cannot change hands without the Government’s agreement. Consequently, we have decided to proceed with the first new nuclear power station for a generation. Britain needs to upgrade its supplies of energy, and we have always been clear that nuclear is an important part of ensuring our future low-carbon energy security."

The contract was formally signed in London on 29th September 2016 by the secretary of state for business, energy & industrial strategy Greg Clark, EDF chairman & chief executive Jean-Bernard Levy and CGN chairman He Yu.

In October 2017, it was announced that the earthworks contractors - a joint venture of Kier and Bam Nuttall - will have to demolish and replace 150 cubic metres of concrete poured on the site. This is part of work to form tunnels to contain pipes and cables and is local to a small stretch of the 8 km network. Problems were identified in sections of the concrete base slab constructed above the galleries sections.

However, the affected material is relatively small considering that 60,000 cubic metres have been poured on the site to date. Nothing has yet been built on the slab, which does not form part of the main nuclear power plant foundations. Construction work is not due to begin on the main building for another 18 months.

In response to the news, Mark Farmer, author of 'Modernise or Die' tweeted: 'Expect more of this in the mainstream of our industry as the competency and enforcement bar is lifted post-Grenfell'.

In November 2017, the Commons public accounts committee (PAC) accused the government of failing to protect consumers over the price it has promised to pay for power generated from the nuclear plant, arguing that it would hit poorest households hardest.

With billpayers being expected to pay £30bn for the plant over the 35-year contract, this is estimated to add £10-£15 to the average household energy bill.

An assessment by the PAC concluded that consumers' interests were not championed by anyone in Whitehall during the negotiations with EDF. They also claim that the final consumer bill was exacerbated by the government failing to renegotiate the guaranteed power price for fear that EDF and its Chinese partner CGN would walk away from the project.

Meg Hillier, chair of the PAC, said “billpayers have been dealt a bad hand by the government in its approach to this project.”

The criticism follows another highly critical report by the National Audit Office, which found the contract for Hinkley had locked consumers into a 'risky and expensive project'.

Retrieved from "https://www.designingbuildings.co.uk/wiki/Hinkley_Point_nuclear_agreement"
Create an article