Failure of wall ties has become a significant problem in recent years. The main cause of failures is the rusting of metal ties, although there can be other causes, such as failure to properly bed the tie in the mortar joint, poor quality mortar reducing the bond between tie and mortar, or not installing the requisite number of ties.

Wall ties are used to hold the internal and external walls that make up a cavity wall together as a single unit. Over the years wall ties have been made from a variety of materials, the most common being metal that has been coated in zinc or bitumen, with stainless steel becoming more common in recent years.

Wall ties play an essential part in a property’s structural stability. The obvious danger with rusting wall ties is the possible collapse of the outer leaf of the cavity wall. Other consequences can include:

But, because wall ties are situated within the wall’s cavity and cannot be seen externally, it’s important to know what signs to look out for that could indicate wall tie failure. Identifying and fixing problems with wall ties as early as possible can prevent serious damage to a property’s structure and keep repair costs down.Owners of properties with cavity walls should look out for signs of wall tie failure to avoid serious structural damage occurring.

Corrosion refers to a partial or complete wearing away or a dissolving or softening of a substance by a chemical or electrochemical interaction between the metal and its environment. Rusting is a type of corrosion and it is caused by the interaction of water and iron or steel in the presence of oxygen. Rust is a hydrated iron oxide, which although solid in form, is weak and brittle.

Galvanising is a means of protecting iron or steel by coating it with zinc. The zinc protects the steel electrochemically. Of the two metals zinc is the more chemically inactive and it will slowly corrode in preference to the steel. The thicker the original coating of zinc, the longer it will last. The zinc protection reduces in thickness but it does not undergo a chemical change. Eventually the zinc coating will disappear.

Properties built between 1935 and 1981 are most at risk of wall tie failure for a couple of reasons. Firstly, most houses built before 1935 had solid walls, and secondly, during the early years of cavity walls the wall ties were not made durable enough and frequently suffered from premature corrosion. It was in 1981 that the British Standards Institute recognised the problem with wall ties and the zinc coating on the wire tie was tripled in thickness.

The process of rusting can accelerate due to:

The portion of the tie in the outer leaf will usually be the most severely affected because of exposure to rain penetration. However, condensation may also produce enough moisture to allow rust failure to occur.

In the UK during 1945, a British Standard (BS) was introduced which set out, amongst other things, a minimum thickness for the galvanising layer. The standard identified the two basic shapes of tie – vertical twist and butterfly. The standard specified that the galvanising should be twice as thick on the vertical twist as it was on the butterfly ties. Unfortunately this minimum thickness was reduced in 1968, because it was thought that the standard was excessive.

In 1981 the standard was increased and specified the same thickness for both types. The reason for this was the increasing evidence regarding performance in use and the realisation of the scale of the problem. The problem of rusting was thought at one time to be localised as it was believed that it occurred mainly in areas where a catalyst, for example black ash mortar, increased the likelihood of breakdown. It was later appreciated that the problem was more widespread and the causes more complex.

The Building Research Establishment (BRE) has suggested that all steel or iron wall ties inserted prior to 1981 are at risk of (premature) failure (premature relates to the notional 60 years life of a building.) Because cavity walls tended to be first introduced in areas with high rain penetration, including salts, there can be a potent combination of age and aggressive environments.

Stainless steel walls ties are available. Stainless steel is a ferrous alloy which contains at least 10% chromium. Since chromium is more reactive than iron, a ‘self healing’ impermeable layer of chromium oxide forms naturally on the surface of the steel. Chromium oxide is durable in a wide range of exposures and prevents the formation of rust. Where there is exposure to chlorides, for example in marine conditions, care must be taken in selecting the appropriate grade.

The main signs of wall tie failure are:

Ideally, strip ties should be identified before the cracking occurs. This might involve a visual inspection of the suspect ties, either by using an optical probe or by removing bricks. It should be kept in mind however, that a tie can be in good condition in the cavity but poor in the outer leaf and therefore exposure of the end embedded in the outer leaf is a sensible step.

Ties can be assessed visually for rusting. The presence of red rust, the product of the oxidation of iron, indicates severe rusting, while the presence of white deposits or a blackening of the galvanising indicates that the zinc is corroding. Measurements of zinc thickness will enable the projection of the remaining life (The Building Research Establishment give some useful guidance on this.) Metal detectors can determine the exact pattern of tie placements and can help in establishing if a defect is caused by wall tie failure. 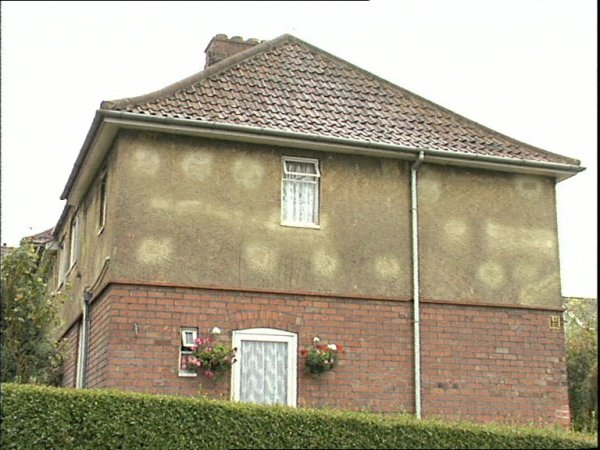 Disguising wall tie replacement is difficult, particularly where houses are rendered. Painting will help, but it is very difficult to match the texture of the original render. In plain brickwork, extensive repointing is usually necessary.

[edit] What should you do?

If you suspect that there may be a problem with your property’s wall ties, it’s important to seek advice from an expert as soon as possible to prevent the building becoming structurally unsafe.

If a gable end wall collapses due to wall tie rusting, would it be covered under a house insurance policy or, be deemed to be fair wear and tear?