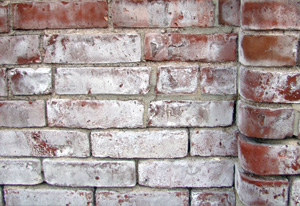 Efflorescence is a crystalline, salty deposit that can occur on the surfaces of bricks, masonry or concrete. It is generally a white or off-white colour with a powdery appearance. While not a risk structurally, it affects the appearance of a building, particularly it features coloured concrete or brickwork.

Efflorescence is caused by water-soluble salts and other water-dispersible materials that come to the surface of concrete, bricks and mortars. There are a number of potential causes, including:

Water moves and migrates through capillaries (channels) in concrete, masonry, mortar or brickwork, carrying salts to the surface. The fewer capillaries there are, or the higher the density of the material, the more difficulty the water will have in passing through to the surface. The higher the porosity of the material, the greater the likelihood of efflorescence occurring.

Calcium hydroxide, which is formed in the hydration reaction of Portland cement, is carried through the capillaries to the surface by water. On reaching the surface, it combines with carbon dioxide from the air to produce calcium carbonate and water, which evaporates leaving the salt deposits. Hydroxides and sulfates of either sodium or potassium can also cause efflorescence, and as these are more water soluble than calcium, tend to appear much more quickly. These salts tend to come from cement, aggregates or admixtures.

As salt deposits are left behind by the evaporation of water, humidity levels influence the appearance of efflorescence, which means that to a certain extent it can be seen as a seasonal problem.

Steps can be taken to prevent or limit the spread of efflorescence. For example, in their natural state sand and gravel may have been associated with salt-bearing water or soil. This can lead to efflorescence unless the salts are removed by washing. This procedure is common practice for many suppliers so the risk should be small.

Mixing-water used for mortar or concrete may be taken from a natural source which has been in contact with a sulfate-bearing soil. In this instance, efflorescence can be reduced by using a low water-cement ratio mix for concreting.

Clay products such as building bricks and face bricks may also contain soluble salts. To prevent or reduce this, the clay can be washed during the manufacturing process, and a barium salt (such as barium carbonate) added to react with the calcium sulfate. This reaction results in the compounds barium sulfate and calcium carbonate, both of which are fairly insoluble.

In terms of site storage, bricks should be kept off the ground in a dry place so as to prevent dampness or the absorption of moisture. A test can be carried out to ascertain the soluble salt content of a batch of bricks. One brick is placed in distilled water for a week, after which the extent to which the water has been drawn through the brick and evaporated from the surface should be evident.

There are a number of methods for removing efflorescence effectively.

Calcium hydroxide can be removed before it combines with carbon dioxide by either pressure washing or wet-scrubbing which puts it in solution with water and allows it to be rinsed away. Fresh water should then be applied by using an air jet or wet vacuum so that the structure isn't left with residue on the surface.

Efflorescence, once it becomes insoluble, is more difficult to remove. A mild acid solution can be applied, often using muriatic acid which has been diluted from full strength. After acid washing, the surface should be thoroughly flushed with water and neutralised with baking soda or an equivalent form of sodium bicarbonate. It is important to consider the implications of using acid on the structure surface, which can erode mortar and discolour brickwork.

Light sandblasting can be used for efflorescence that has been present for several months. Once the surface is dry, the application of a stiff brush to the surface can help to prevent the salt from penetrating again.

Retrieved from "https://www.designingbuildings.co.uk/wiki/Efflorescence"
Create an article