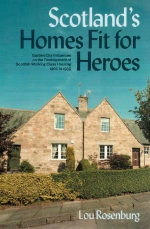 At a time when UK governments are desperately floundering in their attempts to develop workable housing and planning policies, we can learn from history. Specifically, when the government is promoting garden cities without much idea of what one might be, we can learn from Lou Rosenburg’s important history of working-class housing in the early decades of the 20th century, when a great deal of creative thought was being given to the subject. The scene is Scotland but the story is widely relevant.

Why has Scottish working-class housing been so strikingly different to that in England and Wales? Between 1840 and 1900, within urban parts of Scotland, conventional tenements accounted for the vast proportion of newly built working-class dwellings, Rosenburg writes, while the vast majority of Victorian and Edwardian terraced housing in Scotland was built for middle-class families. By 1915, according to the pioneer urbanist Patrick Geddes, ‘more than half of the whole population [of Scotland] in fact, are in one- and two-room tenements – a state of things unparalleled in Europe or America, in fact, in the history of civilisation.’

Why was this? And why, when Scottish local authorities started building housing, did they build cottages and cottage flats rather than tenements for a few years, before turning back to tenements? And where did the cottage-flat tradition (so influential in the late 19th and early 20th centuries in Scotland, Tyneside, London and elsewhere) come from?

Rosenburg, an honorary fellow at the Scottish Centre for Conservation Studies at the University of Edinburgh, has the answers. He turns to the economic and social historian Richard Rodger for help with that first question. Rodger traces the development of tenement building in Scotland to five factors: adverse climatic conditions (making living off the ground especially advantageous); the availability of good building stone; the need for security (which inhibited towns from expanding, encouraging vertical forms of development); mercantile privilege (which again constrained outward expansion); and economic underdevelopment (causing merchants to be unable to afford spacious town houses).

Rosenburg sees a forerunner of the cottage flat in Scotland as the two-storey structures built in Scottish fishing and weaving villages, with workspace on one level and living accommodation on the other. He sees another antecedent for them in the prototype working-class housing designed by Henry Roberts, under the patronage of Prince Albert, that formed part of the Great Exhibition of 1851.

The move away from building tenements was strongly influenced by research carried out during 1909 and 1910 into housing conditions of Scottish miners, and by the garden city movement. Rosenburg has researched the story in great detail (with John Rosser) and he tells it well. The book is fully illustrated with old and new photographs and, best of all, plans. Although no full-scale garden city was built in Scotland, an impressively wide range of garden-city-style developments were built. Context readers may remember Rosenburg and Rosser writing about some of them in their article ‘The Veteran’s Dream’ (Context 137, November 2014).

Despite the low-density developments built on garden city lines in Scotland often being seen as the physical expression of the Homes Fit for Heroes spirit, it seems, Rosenburg writes, that ‘relatively few of the returning veterans were able to gain access to this impressive new standard of working-class accommodation’.

By the 1930s Scottish local authorities were finding it too expensive to build garden-city-style cottage housing on the new estates that were rehousing people who had been moved due to slum clearance. Instead, many of the new rehousing estates were composed largely of tenements (in the form of freestanding pavilions, not the traditional courtyards) and cottage flats, a trend that had been promoted by government guidance for Scotland in the 1920s. Many of these estates were poorly planned, consigning their tenants to far-flung urban peripheries with few amenities.

Rosenburg quotes the Glasgow-based politician and housing and planning campaigner Jean Mann, later a Labour MP, summing up in 1941 the case for new towns. ‘Between the wars,’ Mann wrote, ‘we did not build any new towns, but we built the equivalent of houses in 17 new towns, and threw up these houses around the perimeters of towns already too large, without regard for the convenience of the people, industry, transport, or our backward areas. The present municipally housed population [in effect] gave their housing subsidy back to the transport companies, and their trade union benefits in reduced working hours are lost in travelling’.

Lou Rosenburg and John Rosser have taken the trouble to visit many of the housing developments whose history they have told. They find that many of the peripheral estates, built in a desperate attempt to achieve the necessary numbers of homes, failed to flourish and in some case have not survived, while the carefully planned cottage estates, many of their homes since bought under the right to buy, look set to provide good places to live for years to come.

The lesson for today is that careful planning, and a concern for quality in housing, turn out to be exceedingly worthwhile investments. Is the government listening?

This article originally appeared in IHBC's Context 148, March 2017. It was written by Rob Cowan, editor of Context.

Retrieved from "https://www.designingbuildings.co.uk/wiki/Scotland%27s_Homes_Fit_for_Heroes"
Create an article