The secret life of the Georgian garden 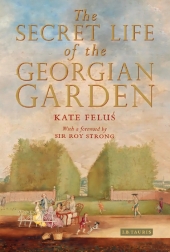 Here is a book with the author’s personal stamp clearly on it. Writing in the first person singular, Kate Felus starts by describing how she lived and worked at Stowe, Bucks, at the time of the National Trust’s ‘epic restoration’ of the vast garden and its buildings, which began in 1989. From here she undertook a doctoral thesis (the basis of this publication) and now fully devotes her work to consultancy on gardens.

The secrets divulged here are sometimes risqué but mainly present for our consideration the serious reasons why Georgian gardens in the surroundings of the houses of the gentry and nobility contained so many buildings: follies, grottos, eye catchers, temples and so on, and their supplements such as walled plots and glasshouses. We have all seen these, whether dilapidated or thriving, but rarely give much thought to their original purpose. Surprisingly, The Secret Life breaks much new ground, both in its abundant sources, in the interpretation of the fabric that survives, and in the supporting documents. These cover lost buildings as well as those we may still behold.

Such buildings mainly addressed two big problems: the British climate and the crowded nature of domestic life in the houses where family and servants shared limited space. Escaping into the open spaces of the gardens and even into the farthest reaches of great parks, a sudden shower called for the welcome shelter of hospitable buildings.

Planned tours of gardens were laid on for guests. These could take the form of carriage drives round the estate. Such trips might pause for refreshment and entertainment. All of this is explained in the book, with ample evidence that reaches as far as suggesting what might have been on the menu for the outdoor meals. Where lakes were available, the entertainments could include fishing, boating or even the staging of mock sea-battles.

The Secret Life has much to offer. Its contents offer fresh insights into the significance of garden buildings for professionals as well as for a wider reading public. Both will enjoy its entertaining, lucid and thorough approach to a subject that has waited long for a specialist single-volume publication.

This article originally appeared in IHBC's Context 148, March 2017. It was written by Graham Tite, a conservation officer working on buildings and their parkland settings in Buckinghamshire.

Retrieved from "https://www.designingbuildings.co.uk/wiki/The_secret_life_of_the_Georgian_garden"
Create an article