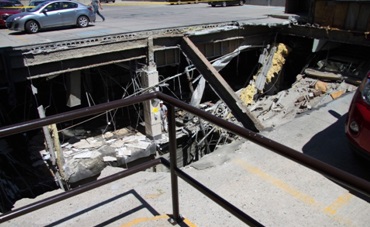 In June 2012, part of the roof of a 32-year-old mall in Ontario, Canada collapsed killing two people and injuring nineteen. There was a subsequent Public Commission of Inquiry and the conclusions make uncomfortable reading but offer food for thought to all involved in the design, inspection and maintenance of publicly used buildings – particularly those with roof top car parking. The role of the Commission was not to castigate but to seek to prevent recurrence.

The Elliot Lake Commission of Inquiry (1) report published in October 2014 gives various reasons for the collapse at the Algo Mall. It recounts a saga of inappropriate initial construction, neglect over many years by three different owners, reports from engineers that were ignored, and reports that inadequately addressed the issues. During almost all of its thirty two year history the roof had leaked and the ultimate cause of collapse was corrosion of a weld after long term exposure to water and chlorides.

The Commission found that the collapse was due to human failure. To quote part of the summary:

'Many of those whose calling or occupation touched the Mall displayed failings – its designers and builders, its owners, some architects and engineers, as well as municipal and provincial officials charged with the duty of protecting the public. Some of these failings were minor; some were not. They ranged from apathy, neglect, and indifference through mediocrity, ineptitude, and incompetence to outright greed, obfuscation, and duplicity. Occasional voices of alarm blew by deaf and callous ears.

'Some engineers forgot the moral and ethical foundation of their vocation and profession – to hold paramount the safety, health, and welfare of the public.'

The structure was a three storey steel frame with pre-stressed precast hollow core slabs for both floors and roof. It complied with the then current 1975 Ontario Building Code. There was no code specifically for parking structures but the roof was a car park with 334 spaces.

Hollow core pre-stressed units were 203 mm (8 in) deep, 1.2m (4 ft) wide and typically spanned 9.1 m (30 ft).There was insulation beneath the units and an in situ topping above. The decision to use hollow core units for parking deck was unusual as the norm was for long span double-T units. Even more unusually, the Commission concluded it was not thought necessary to provide a full waterproofing system or wearing course.

Longitudinal V-shaped edges between the units were grouted but spaces at the ends were left un-grouted to allow for movement. The Commission found there was no mention of continuity reinforcement over the supports and indeed there seems to have been a view that cracks would form at these joints anyway so this should be encouraged. Weather in the region is severe in winter with low temperatures and snow - the design snow load was 1.3 kN/m2 (27.5 lb / ft2). Insulation was provided beneath the units so the top surface of the concrete was exposed to freeze/thaw conditions and traffic including snow ploughs.

The slabs were also susceptible to movement due to temperature changes. There was no air-entrainment in either the precast slabs or the topping although this was found not to have contributed to the failure. The waterproofing was designed and installed by a specialist company with considerable experience and a track record of successful projects. In this case they adopted the method usually used for long span double-Ts although it had not been used before with hollow core units (which were less than half the span of a typical double-T).

A composite in situ fabric reinforced topping 75-100 mm (3-4 in) thick or more was used to aid load bearing capacity and help with drainage falls. Three complete structural expansion joints were provided through the building and finished at roof slab level with sealant. Crack control joints were created in the longitudinal direction of the slabs at every third joint (i.e. 3.7 m or 12 ft) where there were strips of waterproof material between the units and the topping.

The Commission found the design intent was to preform V-shaped recesses in the topping at these positions whilst the concrete was still plastic and subsequently fill these with sealant. At the butt joints over the steel beams, generally every 9.1 m (30 ft), the intent seems to have been for the same technique but there may, in practice, have been complete separation though the topping . There was a membrane strip over the joint between the ends of the units, a filling strip in the joint, and a sealant at the surface. There were therefore many joints in both directions and many potential points for leakage should these not be waterproof.

The Commission found that from day one the roof leaked and numerous attempts were made to fix it throughout the life of the building. Water found its way through joints, in between the slabs and the topping, onto the supporting steelwork, and into the retail units below. In winter the water contained de-icing salts. Over time the topping de-bonded in parts and there was significant corrosion of the structural steelwork.

Eventually there was a sudden collapse as a steel frame connection between a beam and a column failed and debris fell into the mall.

The lack of continuity and tying of planks to supports meant that when failure did occur there was no alternative mechanism. This issue is now covered in the Practical guide to structural robustness and disproportionate collapse in buildings (2010) (2).

The Commission found that no individual, or prime consultant, was responsible for the whole design and construction; the architect prepared architectural drawings, the engineer handled structural design, the developer acted as main contractor, and a specialist firm was in charge of designing and applying the waterproofing system to the roof deck.

One of the criticisms made by the Commission was that all three owners involved in the property had the resources to fix the leakage problem but none did so. Their preferred option, the Commission found, was to continue to patch and seal the roof cracks despite the fact that the repairs were not working. Over its lifetime there were several engineering inspections, either in relation to the leaks or of a more general nature. The Commission says;

'Some engineers forgot the moral and ethical foundation of their vocation and profession – to hold paramount the safety, health, and welfare of the public.'

'Some of the inspections were so cursory and incomplete as to be essentially meaningless. Others were fundamentally flawed because they were based on false assumptions or calculations.'

Several reports pointed out the risks of not carrying out proper remedial work but they were ignored. None of the professionals appeared to have anticipated the severity of corrosion caused by years of leakage and the effect of water-entrained chlorides on the steel below. It was found that little attention was paid to connections between beams and columns. Public officials who could have intervened were also criticised for ignoring repeated complaints about leaks and did not enforce, or improperly enforced, their own property standard by-laws. Some public officials were apparently unaware of the contents of their own by-laws.

A sad and damning incitement indeed of the whole process, but a welcome airing of all the facts such a short time after the event. By comparison many years can elapse in the UK before the results of an enquiry are published.

The Commission made a number of recommendations for implementation in the state of Ontario. Those which are most generally relevant are summarised below.

In some countries such standards already exist, at least in part, whilst in others the implementation of these recommendations would greatly improve public safety. The response to the Commission’s report in Ontario is not yet known.

[edit] Lessons to be learned

This Topic Paper has been published by Structural-Safety (3) so that the lessons to be learned from the Commission’s report can be more widely known. In particular:

You can view the original topic paper here.

Retrieved from "https://www.designingbuildings.co.uk/wiki/Elliot_Lake_Mall_Inquiry"
Create an article