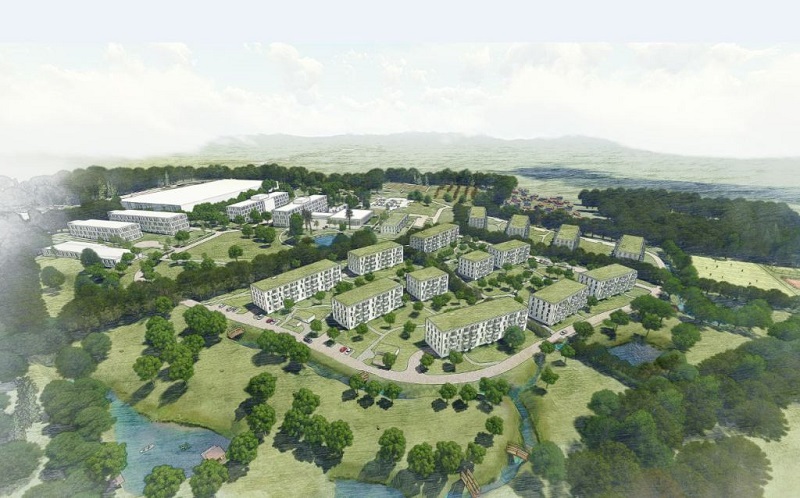 Temple Farm Development spreads across an 85-acre rural site in Chelmsford, England. The project comprises offices, residential and healthcare buildings, and an Energy Centre. It is the second BREEAM Communities project to have received an Outstanding rating.

There are many innovative features that make this project an exceptionally dynamic and pioneering one in all aspects of sustainability, but the most prominent feature is the divergent and creative thinking that has gained Temple Farm its single innovation credit, a milestone in the history of BREEAM Communities assessments.

The innovation credit is awarded for implementing a methodology that significantly reduces transport carbon emissions attributable to construction workers engaged on this large development.

The methodology involves housing the majority of construction workers in accommodation on, around, or near the development site; thus significantly reducing commuting vehicle movements and transport CO2. Pedestrian and cycle paths link the adjoining accommodations to the construction site access points.

This methodology is innovative in that it redefines the traditional practice of construction worker commuting to the development sites, frequently over great distances and for extended periods of perhaps a year or more for large developments. This approach has been applied from the start of construction work at Temple Farm in Feb 2016 and has a projected saving of 64% of Transport CO2 (2,250 tonnes) over the five year construction period.

The primary benefit of this forward-looking solution is lessening current and future climate change effects attributable to CO2 emissions. This is a simple yet effective step that sets an example of how one of the foremost modern day issues can be addressed.

The secondary benefits of this approach are reductions in noise and nuisance by lowering local vehicle movements and potential accidents. This will result in improvements in health and safety and construction efficiency due to eliminating stressful and time consuming daily commutes of the majority of work-force. It is believed that this will lead to an improved quality of life, worker satisfaction and improved productivity which the management aims to evaluate via worker surveys throughout the construction period.

It is one of the aims of BREEAM to support innovation within the construction industry and its supply chain by rewarding construction projects that go beyond best practice in terms of a particular aspect of sustainability. Temple Farm clearly demonstrates going ‘above and beyond’ the requirements of the scheme to demonstrate tangible benefits not only in terms of transport related carbon emissions but also the social impacts of traffic on the local community.

Besides the innovation credit, Temple Farm demonstrated a commitment to excellence in many other aspects of its design and construction which is worth highlighting a few:

Due to its former use as a scrap yard/car breakers, the site has been heavily contaminated. During remediation of Temple Farm over 8,000 tyres were found buried which have been excavated and will be reused on site or recycled. This area has historically suffered from significant surface water drainage problems owing, in part, to this contamination. This has now been successfully and sensitively remediated, certified by the Environment Agency.

Temple Farm was also classified as Green Belt land until 2010 when a 39 acre parcel in the centre of the site was removed from Green Belt and approved for development. Subsequently, the site has a number of high value ecological assets including ancient hedgerows and veteran trees, many of which required restorative work due to years of neglect. As part of the redevelopment of the site, key ecological features (ponds, ancient trees and hedgerows, native species etc.) have been protected, restored, and made a focal point in the design.

Although it will be years before Temple Farm is completed and occupied to its full potential, there is already a sense of community and unity on and around this massive construction site. The temporary caravan-like accommodations have been individualised and turned into homes by Temple Farm construction workers and do not carry any resemblance to a temporary place of living.

The site itself is very positively known amongst the locals and the roundabout that was originally created by the developer to ease the entrance of large vehicles into the site, is turned into an attractive tree-lined feature as well as a main connection point in town with bus stops and the beautiful scenery of the pond and the forest rather than being just a grubby entrance to a construction zone.

Temple Farm is not a restricted construction zone, but a state of the art development which when completed will admit tour buses and welcome visitors. It aims to knowledge share and showcase all the new and existing technologies and design solutions that were employed to develop a heavily contaminated yet ecologically valuable piece of land outstandingly.

Temple Farm can be called the realisation of the aims and objectives of the BREEAM Communities scheme, as not only does it meets the planning conditions and regulations of Chelmsford City Council, but it also pushes boundaries, and encourages innovative sustainable design and creates a community.

BREEAM continues to be an instrumental tool that inspires and supports the industry to create socially, economically and environmentally viable built environments that are backed by science and technology and owned and trusted by the community.

This article was originally published here by BRE Buzz on 19 June 2017. It was written by Rose Pourmatin.