Performance and wellbeing, beyond compliance 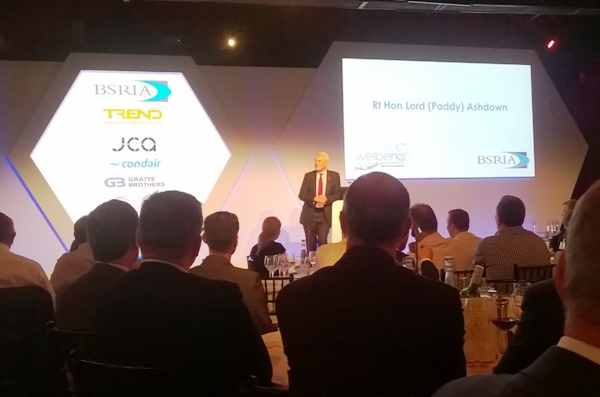 On Friday 11 November 2016, the annual BSRIA Briefing was held at the Brewery near the Barbican in North London. The event considered the ideas and issues behind the concept of wellbeing, and whether the industry should be aiming higher than mere compliance.

The morning session was kicked off by BSRIA Chief Executive Julia Evans, taking part in her third BSRIA briefing. She introduced the event Chair, Sarah Ratcliffe from the Better Buildings Partnership.

With 20 years’ experience in sustainability, Sarah pointed out that 80% of the buildings we will occupy in 2050 have already been built, making it a challenge to meet our carbon emission targets. But, we should not just see the building stock in terms of its potential to have a negative impact on the environment, it also has the potential to have a positive impact on health and wellbeing. At present however, buildings are not performing as well as they could, and this, in part, is due to a “design for compliance” culture.

She challenged the audience, suggesting it was down to them to deliver.

The first speaker was Lynne Ceeney, BSRIA’s new Technical Director. She pointed out that there is no universally-accepted definition of wellbeing, and that, in part, this is because wellbeing is dependent on context.

This, she suggested, makes it difficult to know where to start, however, she proposed three main strands to wellbeing:

The first of these is measurable, and so perhaps should be the easiest, and yet we still get it wrong. The functional aspect is becoming more complex as we demand more flexibility and the work life boundary is becoming more blurred. We are also becoming more aware of the psychological aspects of wellbeing, as we are increasingly health conscious and recognise the importance of access to nature.

Despite some interesting case studies in wellbeing best practice, she suggested that wellbeing standards are generally seen as setting the maximum levels to be achieved, rather than the minimum and that there is still a general reluctance to change.

Professor Paul Cullinan, Honorary Consultant in Respiratory Medicine at the Royal Brompton Hospital, presented a very different perspective on the subject. His work focuses on respiratory diseases resulting from environmental influences, and he has written about the lifelong impact of pollution.

He began by presenting 4 different levels of condition:

These conditions can include very serious and well-known diseases, such as asbestosis, through to those that are “medically unexplained”.

He suggested the word ‘syndrome’ is not one that medical professionals like, and that most people are experiencing at least some of the symptoms associated with conditions such as sick building syndrome all the time. Many such syndromes are culturally specific, seen in some areas and not others despite similar circumstances, and appearing and disappearing with no apparent understandable cause.

That is not to say that these conditions are not real or serious, simply that many of them are not allergic reactions and so are difficult to understand.

He also pointed to the unforeseen consequences of some well-meaning interventions, citing the use of disinfectants in dehumidifiers, which has resulted in lung disease in some parts of the world, and the phasing out of VOC (volatile organic compound) paints in favour of water-based paints. These he suggested where breeding grounds for bugs and so include biocides that can cause serious reactions in some people.

Nicola Gillen, European Practice Lead for Strategy Plus at AECOM began by pointing to AECOM’s 40 year study into the future of work.

She said for the first time in history there are 4 generations in the workplace, and that surprisingly, it is the youngest and the oldest of these generations that have the most in common.

Wellbeing, she suggested, emerged with generation x and generation y, and the realisation that the whole person comes to work, not just the working part, but that companies are not good at recognising this or responding to it.

She presented a number of case studies of workplaces that had been developed or transformed specifically to improve wellbeing, and presented evidence that this had increased the productivity of staff. These included; changes to the offices of the National Grid, which cognitive testing suggested had improved performance by 8%; Esteé Lauder’s beautiful offices intended to attract millennials, with healthy menus, spaces for yoga and an early finish on Friday’s; and Rolls Royce's offices, where considerable effort has been made to encourage staff to move more and to interact.

Ben Roberts, Senior Mechanical Engineer at Hoare Lea & Partners began by presenting a utopian vision of a tech-enabled future. He suggested that delivering wellbeing as part of this vision would be complicated and would require a much better understanding of people.

Research into the future of project teams he suggested, points to a likely shift to spending less time on detailed design, and more in the early stages and in post occupancy evaluation. There would be new roles, and a need to engage with wider disciplines and other industries. The sheer volume of data available to analyse and understand means computers will have to be considered members of the project team. We will also have to develop a greater understanding of the interactions between the buildings we design, the environment and their surroundings.

This change, he proposed, will require different skills, and greater technical capability.

He pointed out that the typical operating costs of a company consist of 1% energy costs, 9% rent and 90% staff costs. This realisation encouraged him to move from a background in sustainability into the field of wellbeing.

He introduced the audience to the word ‘Eudaimonia’, or ‘human flourishing’ and explained British Land’s focus on wellbeing and placemaking as being “customer focussed”. He suggested this is likely to become even more of a focus with the emergence of wearable tech that can tell users, not only where they have been and who they have met, but also what the air quality was and what their exposure to UV has been.

He presented a number of case studies, and introduced the workplace concept “convene to collaborate, isolate to concentrate” and the idea of “sticky streets” designed to slow people down, encourage them to stay and to engage with their surroundings.

The event was closed by keynote speaker Paddy Ashdown, who presented an unapologetically gloomy assessment of a post-Brexit, President Trump world, but continued to claim throughout that he remained an optimist. He suggested that 70 years of liberal consensus was coming to an end, and repeated the old Chinese curse “May you live in interesting times”.

Retrieved from "https://www.designingbuildings.co.uk/wiki/Performance_and_wellbeing,_beyond_compliance"
Create an article