ICE's global collaborations are set have a firm climate resilience focus in 2022. Vice President Richard Threlfall explains why and how. 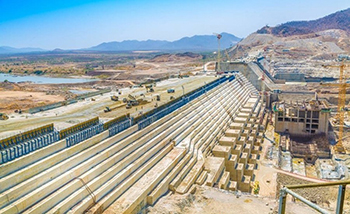 The 13th Brunel lecture series came to a rousing close late last month with an audience of more than 300 hearing lecturer Seth Schultz end his tenure on a high.

Having cajoled our industry to seize its responsibility to play an active role in tackling climate change, Seth came to his final virtual podium with us excited at the level of enthusiasm and determination he had encountered.

His virtual tour took in eight of ICE’s global regions, with lectures and panel debates reaching an audience of over 3,000.

In addition, he held pre-lecture discussions that brought together more than 100 key regional stakeholders and members for robust conversations around industry preparedness to act on climate.

It feels like an important endorsement of our commitment as a profession that Seth steps down as Brunel lecturer confident that we are proactively engaged in tackling climate change through the twin approaches of mitigation through carbon reduction and adaptation through resilient infrastructure.

But there is much still to do in turning intent into real, measurable action.

To help amplify the impact of engineering and infrastructure professionals, the ICE agreed in 2020 to become a founding member of the International Coalition for Sustainable Infrastructure (ICSI), and since early last year I have been chairing the ICSI Board.

It will do this by:

ICSI has scored an early success in being appointed as a UN Race to Resilience Partner.

Race to Resilience sets out to catalyse a step change in global ambition for climate resilience, putting people and nature first in pursuit of a resilient world where we don’t just survive climate shocks and stresses, but thrive in spite of them.

ICSI’s commitment is that by 2030, ICSI members will have influenced and/or delivered 12,600 projects in 2,000 cities to improve the climate resilience of one billion people.

This is hugely ambitious. And we will be held to account.

We will measure the overarching metric as the population “locked in” to good infrastructure choices for climate resilience as a result of the decisions/actions/projects influenced or delivered by ICSI members.

To achieve this, ICSI commits to engage early, advocate strongly, and ensure wherever possible that infrastructure investors (whether they be governments or otherwise) choose the climate-right solution.

[edit] How ICSI will monitor progress

And to monitor progress we will track the following metrics and report progress on an annual basis:

This suite of guidance was launched online ahead of the COP26 climate summit in Glasgow last November and now in 2022 our first target is to see this guidance rolled out to three main cities in Africa and South East Asia, which will contribute to ‘locking in’ good choices for climate resilient infrastructure impacting over five million people.

That in itself is a huge task and will require all parts of ICE to pull together in support of ICSI and this quest.

And this team is already working closely with our International Committee to explore how we can evolve and develop the Brunel series as a powerful vehicle to embed ICSI’s guidance.

We are excited about using the series as a way of opening up conversations with a handful of cities each year to demonstrate how engineers can help solve the resilience challenges that the cities are facing.

So, kudos to Seth for challenging us, and for leading a really great series of lectures - or rather dialogues - this year.

Through this approach, we have created a foundation for something that could be truly impactful in the years to come. This could be really, really powerful. The work starts now.

This article originally appeared on the Institute of Civil Engineers website on the 10th of February 2022. It was written by the ICE Vice President Richard Threlfall.

Retrieved from "https://www.designingbuildings.co.uk/wiki/How_civil_engineers_can_support_%27ambitious%27_plan_to_build_a_climate-resilient_world"
Create an article