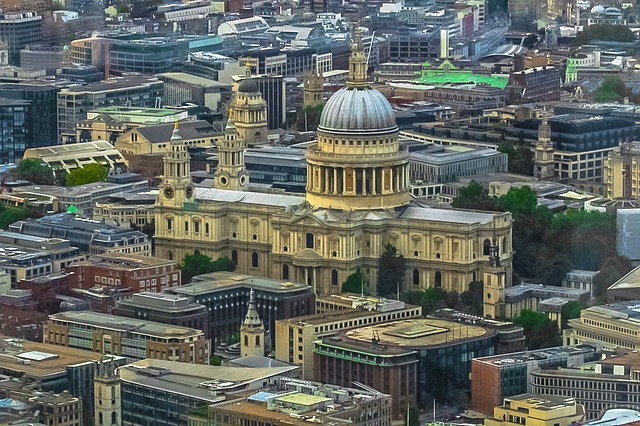 St. Paul’s Cathedral, designed by the architect Sir Christopher Wren, is an Anglican cathedral and one of London’s most iconic buildings. It is located on top of Ludgate Hill, the highest point in the City of London. Its famous lead-covered dome is one of the world’s largest, and at 111 m (365 ft), it was the tallest building in London from its completion in 1710 until 1967.

The current cathedral is the fifth building on the site of Ludgate Hill, the original church having been founded in 604 AD. The fourth, Old St. Paul’s was a huge Gothic cathedral built by the Normans and regarded as one of the masterpieces of medieval Europe, with a tower and spire reaching a height of 489 ft. It was destroyed by the Great Fire of 1666, following which, a decision was taken to build a new cathedral from scratch. The new cathedral was then pierced by a Nazi bomb in 1940, destroying the dome, which was reconstructed later.

St. Paul’s is one of the most significant buildings in terms of national identity, with propaganda images showing it remaining unscathed having become synonymous with the wartime Blitz. It has also been the location for the funerals of Lord Nelson, the Duke of Wellington and Sir Winston Churchill; as well as the wedding of Prince Charles and Lady Diana. 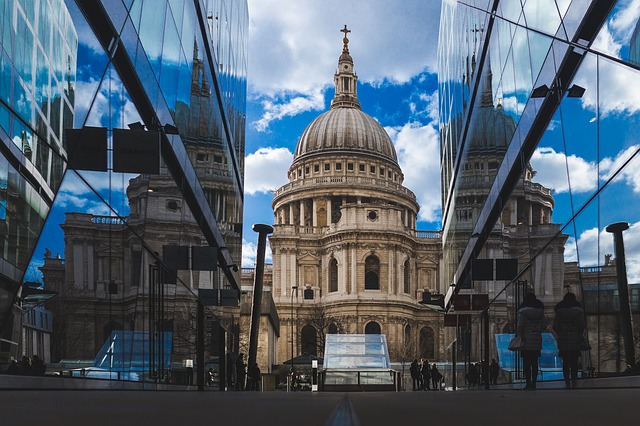 St. Paul’s was one of more than fifty church commissions that Sir Christopher Wren received in the aftermath of the Great Fire. He was tasked with creating a cathedral that was a fitting replacement of the Old St. Paul’s, and a suitable place of worship.

Wren was inspired by contemporary Renaissance trends in Italian architecture, and designed the cathedral in a restrained Baroque style, attempting to combine the traditions of English medieval cathedrals with the classical style of Inigo Jones, and French buildings by Mansart. The cathedral, in particular the dome, is heavily influenced by St. Peter’s Basilica in Rome.

He designed the showpiece west façade to be fronted by a wide flight of steps, a double-storey portico and two Baroque towers.

St. Paul’s is unusual among cathedrals in that it has a crypt which extends under the entire building rather than just under the eastern end. The crypt has a structural purpose, as massive piers spread the weight of the structure’s slimmer piers, necessary due to London’s relatively weak clay soil.

The most notable feature is the dome. To ensure the dome appeared visually satisfying when viewed both externally and internally, Wren designed a double-shelled dome, with the the inner and outer domes using catenary curves rather than hemispheres. Between the two shells, a brick cone supports the timbers of the outer, lead-covered dome, and the ornate stone lantern that rises above it. The cone and inner dome are 18 inches thick and supported by wrought iron chains to prevent spreading and cracking.

The dome rests on pendentives which rise between 8 arches spanning the nave, choir, transepts and aisles. It is raised on a tall drum around which there is a continuous colonnade.

The construction of the cathedral took more than 40 years, and was ‘topped out’ in 1708 by Christopher Wren Jr who placed the final stone on the lantern, watched by his father below. 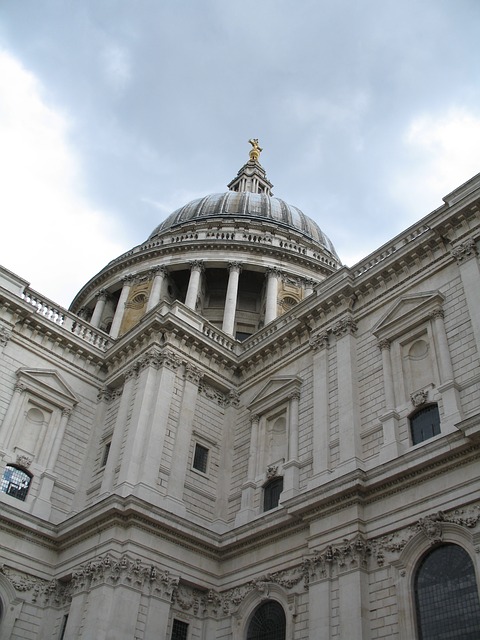 Retrieved from "https://www.designingbuildings.co.uk/wiki/St_Pauls_Cathedral"
Create an article