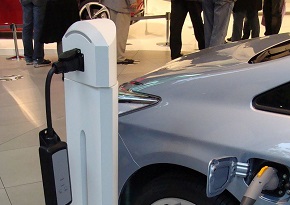 A recent roundtable convened by Siemens, and held at the ICE, focused on identifying the critical steps for the successful roll-out of electric vehicles (EVs) in the UK.

Participants (including utilities, network operators, professional institutions, local authorities, trade associations and transport organisations), discussed the role of the government’s 'Road to Zero Strategy' in providing a signal to the market that the UK is serious about creating an environment that supports the manufacture and use of EVs.

Greater collaboration between the automotive sector, infrastructure owners and energy companies was considered a key enabler. It was agreed that alignment between different local governments must be achieved in order to develop an overarching strategy to increase the use of EVs.

The need to decarbonise transport, and improve air quality in cities, is a government policy priority. It is highlighted in the recently published National Infrastructure Assessment as well as the 'Road to Zero' strategy, in which the government aims to lead the world in zero emission vehicle technology. This also includes an aim that no new vehicles sold from 2040 will have a traditional internal combustion engine.

UK consumers are already making the move. Since 2013, the number of electric vehicles on the road has increased by 69%, but the number of charging points available is lagging behind with only 31% growth in the same period. If we’re going to accelerate take up, the UK will need more charging facilities available in the right place at the right time.

Participants were clear that if the government’s ambitious targets are to be met, policymakers must take a whole system approach looking at the network and available capacity, but also how the end user – either a car owner or a vehicle fleet owner – would interact with the infrastructure.

[edit] The need for local government alignment and greater collaboration

“It needs to be aligned across county borders and across the country to do it properly. We need to make having an electric vehicle the ‘new normal’ and at the same time realise it will be a big leap for people,” said one attendee.

This approach also extended to the charging infrastructure. Participants said the most important thing was providing an “open system, which worked across a range of vehicle types in a predictable manner”, to reduce ‘range anxiety’ and mean charging their vehicle would be as easy as adding fuel is currently.

Key to all of this is collaboration between infrastructure and energy specialists, such as Siemens, as well as the system operator, utilities, local authorities, policymakers and the end user. Such collaboration would deliver a fit for purpose system, which is easy to use and provides value for money.

While there are multiple players who will define how successful the electrification of transport is, there are other large-scale infrastructure developments, which they can learn lessons from, such as the broadband and mobile network rollouts.

This would help to design a cohesive programme, which benefits fleet and private electric vehicle users as well as thinking about the different needs of rural and urban areas

One way to assess the different needs of users would be to implement a large-scale test – such as a living lab.

This test would also aid understanding how people use their personal transport. While most private journeys made are between the home and work, where car charging is likely to take place, there will be times when quick charging points on a long journey, at a motorway service station for example, need to be available.

The charging infrastructure will also be an important element for the logistics sector, to speed up the transition to electric vehicles. For a business with a large vehicle fleet, the cost of implementing a dedicated charging facility at a central site could be cost prohibitive and will again rely on collaboration as well as a strong business case for capital investment.

And, further cost pressures come from the availability of vehicles on sale. While a range of electric vehicles are available in the passenger market, this isn’t the case for logistics – especially at the heavier end of road transport.

“Euro 6 diesel vehicles make more business sense in some cases. Until there is wider cost parity, it will be difficult to make the business case for the investment, when it takes many years to break even on the cost of the vehicle before the cost of charging infrastructure is taken into account,” commented one participant.

[edit] The need to combat the cost factor

But, it isn’t just the roads which are used to move goods. For the waterways, the availability of electric vessels capable of large shipments is a key issue.

The cost of adapting the vessel to electric, plus the cost of introducing a connection to the grid for the charging infrastructure is also a barrier. Charging on arrival would also add additional complexity and costs to moving large shipments of goods, which would again affect the business case for going electric.

While the capital and operational expenditure needed for the investment needs to be addressed, changes to government policy can also play a role. Failure to provide some level of stability to policy limiting the commercial sector’s ability to make long term decisions, ultimately hampering EV adoption.

Despite these issues, the group saw an opportunity for intelligence and smart grids to manage the additional load on the grid effectively. This will be important as the increased use of renewable generation means demand and response cannot easily be managed. Intelligence would make sure vehicles are being charged at a time appropriate for the grid; and the vehicle could also provide power to the grid, if needed to balance renewable intermittency at peak times.

While we are in the early stages in the development of low carbon transport, it was agreed there is a real opportunity for the UK to play a leading role, with the solutions all coming from partnerships.

We will need ingenious models to make this work, but there is a willingness and the know-how to collaborate and find a way together, and this first meeting was just the start of the journey with the group committed to meeting again to continue the discussion.

This article was originally published here by ICE on 22 August 2018. It was written by Ben Goodwin, ICE Lead Policy Manager.

Retrieved from "https://www.designingbuildings.co.uk/wiki/Boosting_electric_vehicle_use"
Create an article