The term ‘data’ describes discrete facts. Data can be structured to create information, organised to produce knowledge and applied to give wisdom, for example, allowing decisions to be made. 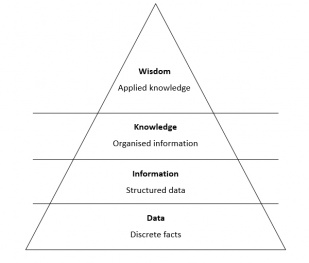 As computational power and data storage capabilities have increased, and the cost of sensors has dropped, so the amount of data we are able to gather and process has risen very significantly.

In 2015, IBM suggested that every day, we create 2.5 quintillion bytes of data, and that 90% of the data in the world has been created in the last two years. Using a very loose description of ‘data’ they suggest that this includes, data from sensors, posts to social media sites, pictures, videos, purchase transaction records, GPS signals and so on. This proliferation of high-volume data is described as ‘big data’.

In buildings, data might be generated by a very wide variety of sources, including:

Data from these sources can be used to understand behaviour, assess performance, improve market competitiveness, allocate resources and so on. However, historically, it has been difficult and expensive to collect this data, and its variety of quality, structure and format made it difficult to use, sometimes for example requiring the manual transfer of data from paper records into digital systems. This meant that data applications tended to be restricted to specific technical functions, rather than being used for high-level decision making.

The emergence of the internet of things, improved data standards, big data analytical technologies and visualisation techniques are increasingly enabling these problems to be overcome, allowing decision makers to understand and interrogate complex data from a variety of sources.

Smart technologies enable the collection, storage, analysis and distribution vast amounts of data, and crucially permit not only observation, monitoring and control of individual processes in isolation, but analysis of how they interact or how a change in one affects another.

Smart buildings centre on the use of these interconnected technologies to make buildings more intelligent and responsive, ultimately improving their performance, and might include technologies such as:

In July 2013, the Government published: ‘Construction 2025’ which suggested that the emergence of new capabilities such as the internet of things ‘… will drive a step change in how we build and how our built environment operates. Crucial to this is the emergence of new technologies in sensors and data management that will become embedded in our assets, enabling performance to be constantly monitored and thereby driving substantial efficiency gains in facilities and asset management..’ It argues that live data will give us a better understanding of performance during construction and operation, resulting in ‘…smarter designs, requiring less material, reducing carbon and needing less labour for construction’.

One of the problems of this increasing volume and velocity of data, is what precisely to collect, or to ask for, and how to analyse and report on it. The data market can be driven by technology suppliers with a vested interest in selling their products, and there can be a tendency to collect ‘everything’, but this incurs costs, and may make it difficult to identify and process data that is actually important in informing decision making processes.

Less product-driven definitions of ‘smart’ encompass the wider, fundamental outputs of the built environment, such as; wellbeing and productivity, as well as consideration of long-term future-proofing and whole-life costs, suggesting that truly smart buildings are those that deliver better environmental, social and economic conditions.

In 1980, I.A. Tjomsland suggested that “… Parkinson’s First Law may be paraphrased to describe our industry—‘Data expands to fill the space available’…. I believe that large amounts of data are being retained because users have no way of identifying obsolete data; the penalties for storing obsolete data are less apparent than are the penalties for discarding potentially useful data.” (Ref Where Do We Go From Here? Fourth IEEE Symposium on Mass Storage Systems).

Carefully describing data requirements, including clear data standards, formats, ownership and so on, will ensure that decision makers are provided with the best data possible at the time when they need it.

According to BSRIA, Big data refers to data sets that are so large or complex that traditional data processing software is inadequate to deal with them. Big data is measured in terabytes (1,000 gigabytes), petabytes (1 million gigabytes) and even zettabytes (1 trillion gigabytes).

Big data can be described by the following characteristics:

Retrieved from "https://www.designingbuildings.co.uk/wiki/Big_data_for_buildings"
Create an article