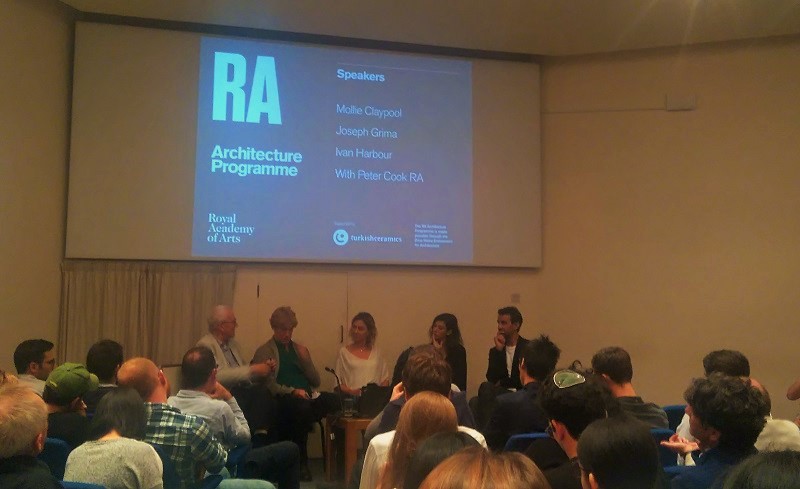 On 5th September 2016, Designing Buildings Wiki attended the Royal Academy for a panel discussion about ‘Plug-In to Housing’. The event was part of the Academy’s ‘Peter Cook RA: Floating Ideas’ programme.

As part of the esteemed panel, Peter Cook RA – one of the founding members of the radical Archigram group – began by explaining the themes and ideas that inspired his legendary ‘Plug-In City’ project in 1964.

‘Plug-In City’ proposed a constantly evolving megastructure that incorporated housing, transportation and other services. Modular residential units that interlocked with an infrastructural core could be moved by cranes, responding to the dynamic conditions of the city and its inhabitants. Like other Archigram projects, this concept championed collective living and presented architecture not as isolated buildings but part of a connected system. Theory and innovation aside though, Cook affirmed his ethos that “in the end, the home is more important than the housing”.

The panel addressed the issue of what the speculative ideas and bold aspirations of ‘Plug-In City’ could offer contemporary society as it struggles to adequately house its own citizens, and each came at the idea of ‘housing’ from different innovative angles.

Ivan Harbour, architect and senior partner at Rogers Stirk Harbour + Partners (RSHP), began by suggesting that alternative methods of building are vital as they might provide a cost-effective way of making construction achievable. He described an unrealised Korean housing project near docks that used shipping containers as housing units. The idea was that the units would be placed around a flexible core by computer control, allowing for minimal human agency and improved efficiency.

This concept fed into RSHP’s later Y:Cube developments; affordable housing units designed as ‘move-on accommodation’ for single people leaving homelessness hostels and supported housing schemes. One of the advantages of these units, Harbour said, was a substantial cost saving in project management.

Harbour also explained how RSHP were working with Medecins du Monde to try and develop a medical facility using elements that can be assembled by the users themselves rather than machines.

Mollie Claypool, designer, writer and educator at the Bartlett and AA School, spoke about her research into architecture that is wholly digital, with an emphasis on design methods for fabrication and assembly units, in connection to housing. This was, she said, a fundamental shift in the way digital designers deal with architecture, offering the potential to have a better dialogue with policy makers, users and building design and construction.

It was her aim, she said, to strip digital design back to basics, or ‘discreteness’, being able to understand a building only through its connections and joints, which could be re-imagined as ‘digital materials’.

She described digital materials as being similar to Lego pieces with ‘male-female’ connections, or binary 0-1 in terms of computer code. There are many aggregations and combinations of a single building part, which can be used to interact with a whole range of different elements in a building. The potential was there to deal, not only with material and structural redundancy, but with spatial redundancy as well.

Joseph Grima, architect, writer/researcher and founder of Space Caviar, spoke about the frequent frustrations in how housing is addressed – either in purely technological, economical or prefabrication terms. He stressed the importance of understanding the home from all perspectives, as something that defies all reduction into simple terms.

He expressed his interpretation of Cook’s ‘Plug-In City’ as being, not just an influential aesthetic, but an allusion to the technologically-saturated society of the time. He drew upon analysis of rising land prices across western societies over the last 30-40 years, to explore the idea that space cannot be defined in spatial terms any longer but as a form of currency that has value as part of a market, with all kinds of cascading consequences.

Related to this, there is no longer any distinction between space of labour and space of domesticity, as what makes up ‘the home’ is no longer simply defined. As evidence of this he pointed to the likes of AirBnb, smart refrigerators and thermostats, or the habit of working from smartphones and iPads at home. He mentioned a recent survey in which it was found that 40% of Londoners said they did work before going to work.

Grima pointed to a project he had led called RAM House which looked at the idea of data as a form of oil, being extracted from the home. Analysis and interpretation of this data would, he said, place control back in the hands of the homeowner.

Retrieved from "https://www.designingbuildings.co.uk/wiki/Plug-In_to_Housing"
Create an article