A single-storey building is building consisting of a ground storey only.

A multi-storey building is a building that has multiple storeys, and typically contains vertical circulation in the form of ramps, stairs and lifts.

The number of storeys is determined according to the diagram below: 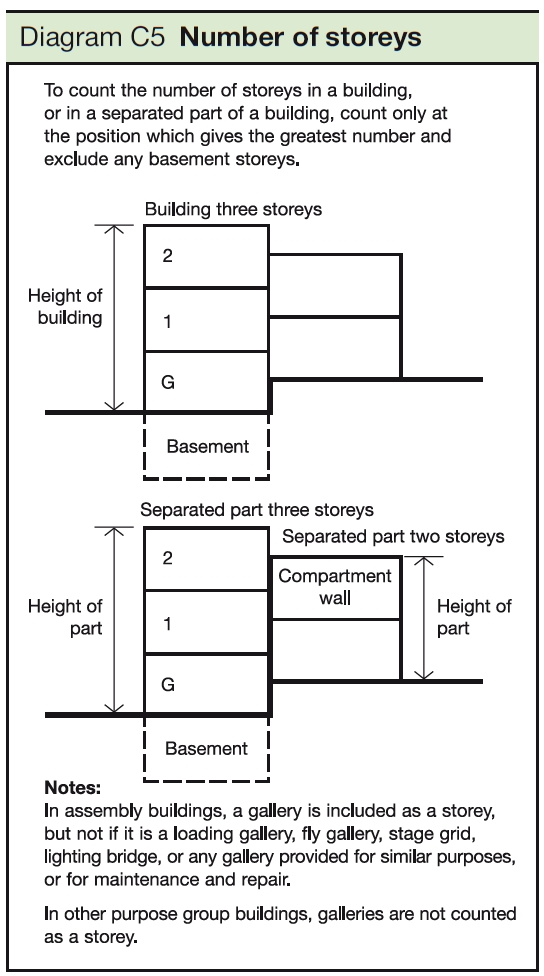 Depending on their height, multi-storey buildings may have particular considerations and requirements in relation to:

Classifications of multi-storey buildings include:

The basic types of multi-storey structure (which may be used in combination) include:

Network of columns and connecting beams form the structural 'skeleton' of the building and carry loads to the foundations.

Uses a cantilever slab or platform as the seating for columns. It utilises an internal core and external propped columns.

Has an internal core and horizontal floors which are supported by high-strength steel cables hung from cross beams at the top.

Has an internal core from which beams and floors cantilever. This removes the necessity for columns.

Bracing is used to give stability so that columns can be designed as pure compression members. The beams and columns that form the frame carry vertical loads, and the bracing system carries the lateral loads. Braced frames reduce lateral displacement, as well as the bending moment in columns, they are economical, easily erected and have the design flexibility to create the strength and stiffness required.

Composed of stiff braced (or shear) panels which counter the effects of lateral and wind pressures. The pressures are transmitted to the shear walls by the floors.

Utilises a stiff structural core which houses lifts, stairs, and so on. Wind and lateral pressures are transmitted to the core by the floors.

Also known as ‘tube-in-tube’ and consists of a core tube inside the structure which holds services such as utilities and lifts, as well as a tube system on the exterior. The inner and outer tubes interact horizontally as the shear and flexural components of a wall-frame structure.

Retrieved from "https://www.designingbuildings.co.uk/wiki/Multi-storey_building"
Create an article