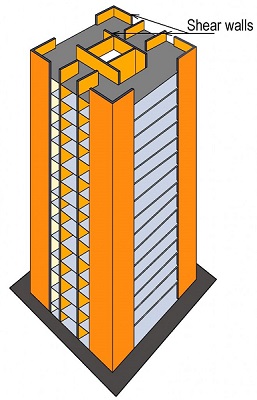 A shear wall is a structural panel that can resist lateral forces acting on it.

Lateral forces are those that are parallel to the plane of the wall, and are typically wind and seismic loads. In simple terms, lateral forces could push over parallel structural panels of a building were it not for perpendicular shear walls keeping them upright.

When a structural member experiences failure by shear, two parts of it are pushed in different directions, for example, when a piece of paper is cut by scissors.

Shear walls are particularly important in large, or high-rise buildings, or buildings in areas of high wind and seismic activity.

Shear walls are typically constructed from materials such as concrete or masonry. Shear forces can also be resisted by steel braced frames which can be very effective at resolving lateral forces but may be more expensive.

Shear walls can be positioned at the perimeter of buildings or they may form a shear core – a structure of shear walls in the centre of a building, typically encasing a lift shaft or stairwell.

Lateral pressures tend to create a rotational force on the shear wall which, due to the shear wall acting as one member, produces a compression force at one corner and a tension force at another. When the lateral force is applied from the opposite direction, this ‘couple’ is reversed, meaning that both sides of the shear wall need to be capable of resolving both types of forces.

Retrieved from "https://www.designingbuildings.co.uk/wiki/Shear_wall"
Create an article