A braced frame is a really strong structural system commonly used in structures subject to lateral loads such as wind and seismic pressure. The members in a braced frame are generally made of structural steel, which can work effectively both in tension and compression.

The beams and columns that form the frame carry vertical loads, and the bracing system carries the lateral loads. The positioning of braces, however, can be problematic as they can interfere with the design of the façade and the position of openings. Buildings adopting high-tech or post-modernist styles have responded to this by expressing bracing as an internal or external design feature.

The resistance to horizontal forces is provided by two bracing systems called:

Bracing between column lines (in vertical planes) provides load paths for the transference of horizontal forces to ground level. Framed buildings require at least three planes of vertical bracing to brace both directions in plan and to resist torsion about a vertical axis.

The bracing at each floor (in horizontal planes) provides load paths for the transference of horizontal forces to the planes of vertical bracing. Horizontal bracing is needed at each floor level, however, the floor system itself may provide sufficient resistance. Roofs may require bracing.

Trussing, or triangulation, is formed by inserting diagonal structural members into rectangular areas of a structural frame, helping to stabilise the frame. If a single brace is used, it must be sufficiently resistant to tension and compression. 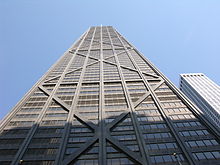 Cross-bracing (or X-bracing) uses two diagonal members crossing each other. These only need to be resistant to tension, one brace at a time acting to resist sideways forces, depending on the direction of loading. As a result, steel cables can also be used for cross-bracing.

However, cross bracing on the outside face of a building can interfere with the positioning and functioning of window openings. It also results in greater bending in floor beams. 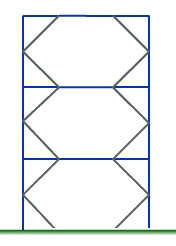 K-braces connect to the columns at mid-height. This frame has more flexibility for the provision of openings in the facade and results in the least bending in floor beams. K-bracing is generally discouraged in seismic regions because of the potential for column failure if the compression brace buckles.

Both systems can significantly reduce the buckling capacity of the compression brace so that it is less than the tension yield capacity of the tension brace. This can mean that when the braces reach their resistance capacity, the load must instead be resisted in the bending of the horizontal member.

Centric bracing is commonly used in seismic regions. It is similar to V-bracing but bracing members do not meet at a centre point. This means there is a space between them at the top connection (see photo above, Salesforce Tower, London). Bracing members connect to separate points on the horizontal beams. This is so the 'link' between the bracing members absorbs energy from seismic activity through plastic deformation. Eccentric single diagonals can also be used to brace a frame.

Retrieved from "https://www.designingbuildings.co.uk/wiki/Braced_frame_structures"
Create an article